The Great Reopening: Market Predictions for the 2020s

In early mid-2020, I circulated a white paper among my team of investment analysts.

In that report, I issued what I considered a “generational” buy alert on the stock market. It would turn out to be the call of my and my crack team of market visionaries’ careers.

Many of the stocks we recommended right before the nationwide lockdown began have gone hyperbolic.

That’s because we had a specific thesis for recommending them.

That stock is Square (NYSE: SQ). It was one of the “cashless” payment plays we recommended right before the lockdown began. It was a trade of a lifetime.

And yet another one of our “cashless” stocks — PayPal — has gained 223% in that same period.

We’ve been destroying the market averages during the pandemic with our analysts’ predictive prowess.

Today, we have a new stock we are recommending for immediate purchase. But this time it’s based on our investment thesis, “The Great Reopening.”

And it comes from my all-star stock picker at Energy Investor, Mr. Keith Kohl.

As the American and global economies reopen, transportation is going to be at the forefront.

We are already seeing it with the airlines. Many carriers are canceling flights because they don’t have enough employees to handle the surge in business.

Flights are booked solid. Traffic on the roads are at pre-pandemic levels. And finding hotel rooms at tourist destinations is getting harder and harder.

After a year of lockdowns and travel restrictions, Americans are busting out and ready to spend lots of money.

And the stock Keith is recommending right now has its fingers all in the transportation sector. In fact, their technological breakthrough is in such high demand that 62% of the top Fortune 50 companies are using it as you read this.

The company went public late last year and has already doubled in value. But Keith thinks this has 10-bagger written all over it from current prices.

And the company’s numbers look great. Their revenue is growing like a weed. They just partnered with Mercedes. This is huge.

I’ll reveal the company in a minute...

But first, it’s important I recount the events as they happened over a year ago... and why I think we are about to go on an historic stock market rally.

Like I said, it all started in mid-March, specifically on March 13, 2020. On the day I issued my buy alert, the Dow had already cratered, down 28% from its highs marked on February 12. It was a bona fide crash. And quite frankly, the bottom was nowhere to be found.

I was literally catching a falling knife. The Dow would lose another 3,000 points in the coming days.

The markets were in an all-out free fall over fears of a global pandemic that, by some expert predictions, would kill 50–100 million people worldwide.

We would later find out that experts can be expertly wrong… and perhaps even misleading with nefarious intentions. But still, it was hard to be a buyer against that backdrop.

I didn’t waver. I kept to my plan and kept buying the market.

You see, my buy thesis was all based on logic, historical precedence of previous crashes and crises, and a healthy skepticism toward the sheep mentality I was witnessing — and not just among the mainstream investing public.

The returns have been life-changing. Like I said earlier, it was a generational buying opportunity.

And now I see an even bigger profit opportunity. I’m calling it “The Great Reopening.”

In short, I believe human nature... and the markets... are about to repeat what happened 100 years ago.

I’m a student of history.

In fact, it was my minor in college. I had aspirations of being either a history or political science professor.

But I’m glad I became a professional investor. My free-thinking, nonconformist, and libertarian style wouldn’t have lasted long at the university.

When analyzing stock market trends and making predictions, it’s important to study what came before. The stock market is just as much about human psychology, routine, and instincts as it is about numbers. I always say: History doesn’t repeat itself, but human nature does.

So it is with the stock market before our very eyes.

With the global economy getting pumped with juice for a restart, there are certain reasons we can expect that the market will follow what happened before.

For that, we turn to the 1920s. The similarities between the 1920s and 2020s simply can’t be denied or ignored. Especially if you’re an investor.

Here’s what the U.S. was experiencing in the beginning of the 1920s:

It gets even more similar.

Between 1920–1921, the U.S. economy was experiencing a brutal recession. That economy contracted nearly 5%, unemployment rose to over 11% (the highest recording for its time), and the Dow lost 32%.

The loss in the Dow in 1929 is almost a carbon copy of what happened last year.

Here’s a superimposed chart of the Dow today versus 1920: 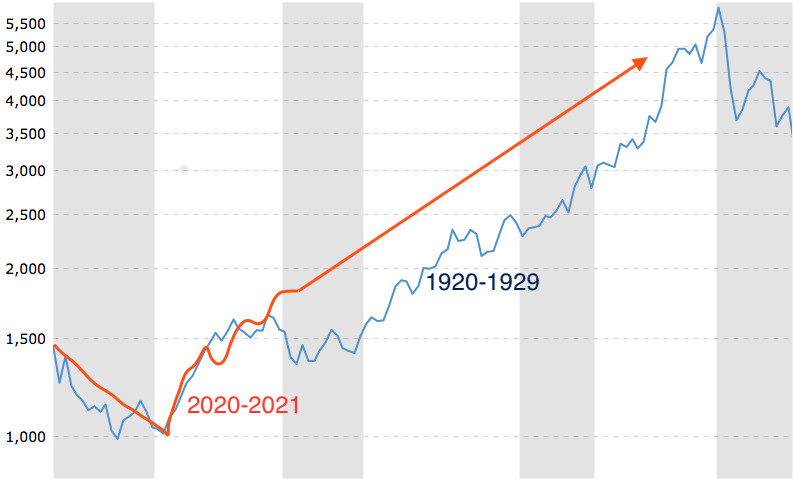 As you can see, the Dow in 1921 rebounded after its crash. It then went on to have a historic bull run that saw it increase by almost 500% in nine years.

If that were to happen again this decade, the Dow would increase to 111,180 from current levels.

I think it will, for reasons I’ll layout in my part 2 of "The Great Reopening."

But in the meantime, I urge you to take a look at this special presentation Keith has released.

In it, he reveals the one stock he thinks is poised to generate massive profits for investors as the global economy rebounds from a near zero level.

He explains his thesis, the one stock he likes in this environment, and why this decade could be one for the ages.

But don’t take my word for it. Listen to the genius himself.