The Future of Medicine

Editor's Note: The following was a Bonus Recommendation written by assistant editor Jason Williams to Wealth Advisory members in November 2016. But I think the stock still has plenty of upside, so I am sharing it with you today.

Since Gregor Mendel first presented his research on plant hybridization in 1865, scientists have been fascinated with genes, the building blocks that make us who we are. But not until recently have we made dramatic progress in mapping the human genome.

In 1983, the first genetic disorder, Huntington’s disease, was mapped, and since then, over 6,000 disorders have been linked to mutations in the 25,000 human genes identified so far. I won’t cover the entire list, but here are some of the more common ones and a brief explanation of what they cause:

So, a mutation in any one of 6,000 genes out of the 25,000 we know of can lead to a genetic disease. That’s about 24% of the known genes. That’s a pretty big number. And an even bigger (and more shocking) number is 100% — that’s the estimated number of people carrying recessive genetic traits that may one day lead to a genetic disorder appearing in them or their families.

I’m not trying to scare you here. I’m just trying to show the gravity of the situation and the need for accurate, affordable, and efficient genetic testing. With genetic testing, these disorders can be identified as soon as possible when they appear in people and the correct treatment can be started immediately.

It would also allow parents to better prepare for any genetic disorders that may affect their unborn children. And even if their children dodge any potential genetic bullets, it would allow them to know what possible disorders might show up in future generations. If you know what you might have to face, you’ll be more prepared to deal with it.

Now, there are literally hundreds of companies out there that offer genetic testing. Most of them, however, offer it for hereditary purposes. You know, ancestry.com stuff. Who am I related to in the past? Where does my family stem from? Am I the long-lost relation of some rich person who might leave me a fortune? All very interesting things to find out. But they’re not going to help you predict what medical issues you or your family might face later on down the line.

There are a good number of companies that offer testing for health-related purposes — far fewer than those offering it for fun, but still more than a handful. But most of these companies only offer tests for a very few specific genetic disorders. And those results have an average turnaround time of a year or more. That’s terrible. Imagine going in to the doctor for a blood screen and having to wait 12 months to find out if you’re sick. Well, that’s common practice in the field of genetic testing.

That is, until one company came into the field with the goal of creating affordable genetic tests that are accessible to everyone. This company's goal is to offer screening for all of the known disorders linked to mutated genes. Even better, this company will reduce the turnaround time to a few weeks instead of many months.

Basically, Invitae has combined the art of creating successful patient-provider relationships with the science of genetic testing and added to it the efficiency of a manufacturer. And it’s revolutionized the field of genetic testing by doing so.

Now patients don't have to wait months, even years for results. Invitae has an average turnaround time of just 14 days! Gone are the days that doctors have to choose from one or two genetic tests because any more would be far too expensive. Invitae offers affordable options that combine multiple tests in one screen.

And just last quarter, the company secured agreements with all of the top five payers in the medical field. That means all five of the biggest insurers are now covering genetic testing for their customers. This is huge! It means Invitae can focus all its efforts on growing revenue now.

Now, Invitae is a small company — the market cap is $366 million. But it is at the leading edge of what should be a huge move toward more people getting genetic testing. In other words, use of Invitae's tests is ramping up right now.

Over the past four quarters, revenue grew from $1.2 million to $6.3 million. In fact, it grew by almost 200% last quarter alone! And at the same time, the cost of doing business (the testing process) dropped from $1,250 per sample to a mere $450 in the most recent quarter.

As the company and revenue grows, that cost will continue to shrink. It’s a basic economic concept called economies of scale. The bigger you get and the more products you make (or tests you run, in this case), the less each individual product (or test) costs. So while sales go up, costs will go down, and that means bigger net income margins to attract more investors and drive up share prices.

But revenue and cost haven’t been the only metrics the company has drastically improved over the past year. In fact, all four (revenue and cost included) metrics management set about to conquer have shown vast increases (or decreases, as is the case for costs). 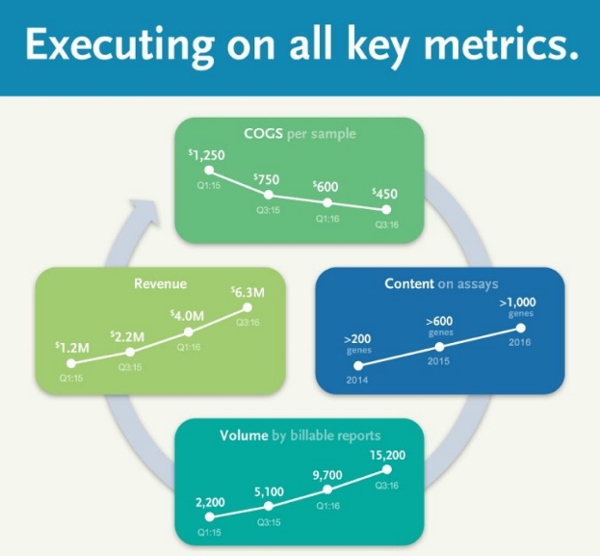 As you can clearly see, this is far more than a feel-good investment. And it’s far from just being a cool story. This is actually a viable company with a crack team running it that’s headed for great heights.

Now, Wealth Advisory subscribers bought Invitae around $6.50 in November. The stock is just over $9 now, but I have a $15 target on the stock for this year, so I still consider it a good one to own.