The Future of Cannabis?

Has cannabis become this year's cryptocurrency?

Has its manic popularity and meteoric rise finally run its course, turning this proverbial chariot into a big, decomposing green pumpkin?

One glance at the mother of all marijuana charts, and the answer appears to be clear.

In fact, looking at the above chart of the North American Marijuana Index in the same glance with the cryptocurrency market cap makes this comparison seem pretty fair.

Both rose dramatically on a wave of institutional support, pushed even further by an enthusiastic press, and finally brought to their crescendo by a popular mania that pulled everyone, from your college dropout nephew to your 80-year-old aunt, into the market.

Of course, both ended the same way: sudden collapse, a dead cat bounce, and a gradual flatlining.

The universe, as they say, will always find balance, even if humans refuse to accept reality.

But in the case of cannabis, this is where things get strange.

You see, cannabis, as a product, as an industry, as an in-demand commodity, isn't going anywhere.

In fact, it's as popular as ever and projected to get even more popular as the years tick by.

In every state where the business has been legalized, there are more applicants than applications for new marijuana licenses.

How Can a Booming Market... Just Collapse?

Overall, the market is expected to double before the middle of the next decade, and that's not taking into account the possibility that the biggest catalyst of all — federal legalization — will likely come around the corner in the next couple years. 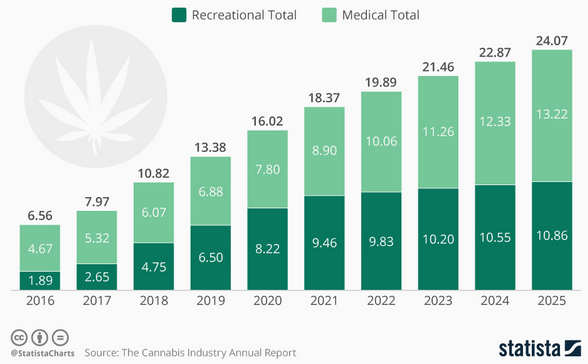 How is it, then, that the index tracking the biggest marijuana stocks in existence is now showing a 60% decline?

The answer is simple. For every irrational mania, there's an irrational sell-off.

But with cannabis, the story is completely different.

All of these things cannot be true at the same time... and yet.

History Has Done This Before

What will happen in this situation is a pattern that follows another famous boom market: dot-com.

Another of the 21st century's famous bubbles, internet technology proved it was more than just a fad by outliving the bust and going on to become perhaps the most important advancement in consumer tech since the advent of the printing press.

Tech stocks, as illustrated in the chart below, returned in a major way. 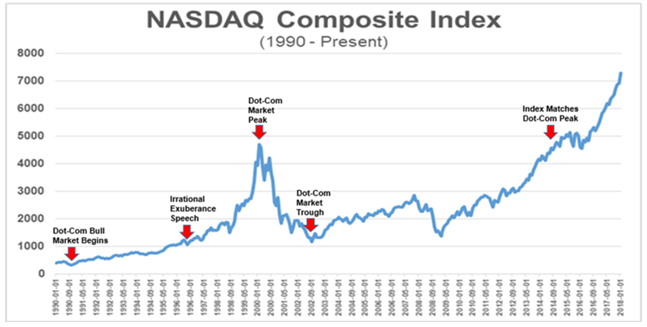 Investors who sold before the bottom dropped out and either returned to buy back in at the bottom or waited until the bottom was in before entering the market in the first place have been winning consistently ever since.

Do the same thing in any fundamentally sound market that's been afflicted by the irrational exuberance bug, and you will see the same results.

Today, this very scenario is playing out with cannabis.

A fundamentally sound market that's been blindly overbought, today, is most definitely in its trough stages.

Which means investors who sat back and waited for the irrational exuberance to run its course can now see the light at the end of the tunnel.

The weak hands have left the market. The underperforming companies and unviable business models have been burned away. The media has stopped pumping the story and moved on to the next flavor of the week.

Want to Be Shocked?

Put more succinctly, if you've ever considered investing in a cannabis company, now is the best time in history to do so.

The risk is gone. The future is clear. The social trends don't just support it... they demand it.

But how do you do it? When valuations and value are no longer in line and you don't know who to believe, how do you dare step back into a field still moist with the blood of the last wave of hopeful investors?

This is the way sober investors do it, and it's the way you need to do it if you're going to play cannabis's second act to your greatest advantage.

If you want to learn about just such a company, I've got what you're looking for.

It's a small, young, yet vibrant operation that's got something few cannabis firms ever came close to: profitability.

Yes, it took a hit when the bottom fell out, but the storm has been weathered. The trend-seeking amateurs have all gone home. The path from here on out can only lead in one direction.

The story here was so compelling that I wrote a report about it, detailing the whole thing.

I urge you to read that report as soon as you can because like I said earlier, now is the best time to be buying cannabis stocks.

If you've waited this long, congratulations... But now the time to act has come.

Check out the report here, now, and decide for yourself.