When the Masks Come Off…

In the movie classic The Ten Commandments, the Angel of Death comes in the form of a low-lying, methodically morbid, moving mist.

The true believers knew death was imminent for the Egyptians. There was nothing they could do about it. It was their turn.

That’s how many of us felt for weeks leading up to the nationwide lockdown over COVID-19. Waiting for the virus was torturous.

When it finally arrived on our shores, we just wanted to get it over with and move on with our lives as usual. After all, it appeared China had a handle on the virus, and it was coming to an end in the country.

In fact, here's a press release from Governor Larry Hogan, the governor of Maryland (where the Wealth Daily office operates): 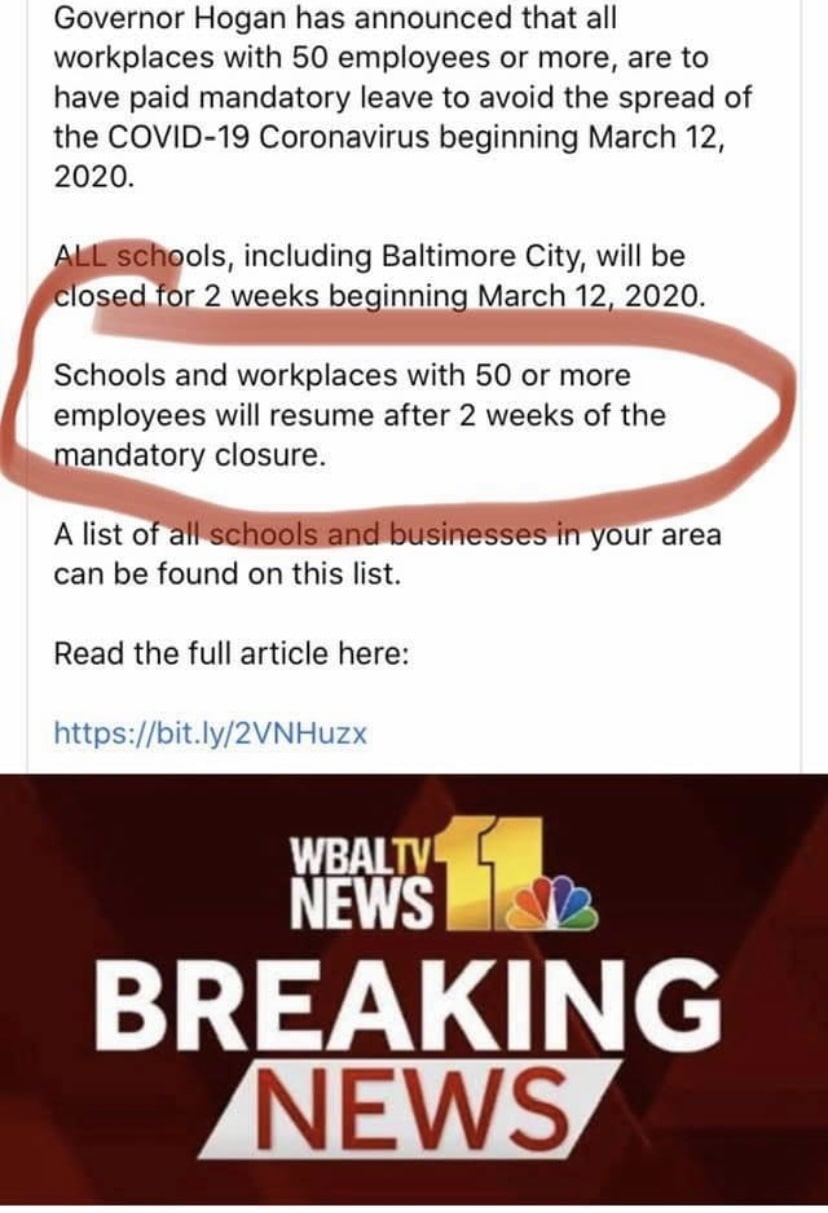 But it wouldn’t turn out that way for the state of Maryland or the rest of the Western world.

Here’s how it played out a year ago in the United States, in slow motion.

On January 21, the CDC confirmed the first case of coronavirus in Washington State.

Catsimatidis asked Fauci, “Should we be scared?”

The market didn’t share his sanguine outlook. The next day, the Dow shed 633 points. The smart money began selling.

On February 12, the Dow made a fresh record high of 29,568. It would be its last record high for several months.

Sixteen days later, the first COVID-19 death in the United States was confirmed in Seattle, Washington.

Markets stabilized as Trump and Fauci reassured the nation.

But the smart money still didn’t buy it. They continued selling into any optimistic proclamations.

By the week of March 9, it was clear the Angel of Death was firmly in the United States. States began announcing school closings.

Trump imposed a travel ban for Europe on March 11.

The world was shutting down.

Retail investors ran for the exits. There was panic on Wall Street.

On Friday, March 13, the Dow opened 3,000 points down from where it opened on Monday.

An urgent call reached Ronald O’Hanley, State Street Corp.’s chief executive, as he sat in his office in downtown Boston. It was 8 a.m. on Monday, March 16.

A senior deputy told him corporate treasurers and pension managers, panicked by the growing economic damage from the Covid-19 pandemic, were pulling billions of dollars from certain money-market funds. This was forcing the funds to try to sell some of the bonds they held.

But there were almost no buyers. Everybody was suddenly desperate for cash.

At the same time, COVID-19 deaths started spiking in New York. Gotham City was about to become the #1 global hotspot.

States like California and Illinois issued stay-at-home mandates. The stampede for the exits accelerated, causing a market crash.

It felt like the end times were here. It was over. Dunzo. Kaput.

Everyone I knew was either selling stocks, raising cash, or going massively short.

Everyone except for Wealth Daily.

You see, a week earlier I released a “back up the truck” white paper that I circulated among my staff... and then I released it to you.

It was meant to alleviate a lot of anxiety and fear among my peers and to argue that the market intelligentsia was buying cheap, quality stocks that were being dumped by weak hands in a classic, market panic.

In short, the pros were feasting on the wounded.

Officially published on March 13, 2020, and titled "The Unwanted Financial Guest That Never Leaves, or: Why It’s Best to Make Fear Your Friend," I said, point blank, that this crash was a generational buying opportunity — one for the history books.

Since that day, the markets have performed accordingly:

You see, I knew even then that enough was known about the virus and its economic impacts for the market to decipher a range of outcomes.

In short, even some of the more dire potential outcomes meant this was a serious but one-off economic event.

You just needed to see the big picture, be patient, and have the courage to buy when everybody else was selling.

History might view it as the buy signal of the century. We will see. But as of right now, it appears to be.

And, of course, there's the ongoing fiscal and monetary response.

You'll recall my parting words from a year ago:

Right now, stocks are selling at fire-sale prices. Can they go lower? Of course. Probably will. But I can guarantee that five years from now those stocks and the markets will be much higher.

My company has always been an unconventional investment firm.

We look at opportunities most investors never think of… and Wall Street pros are too scared or too stupid to invest in.

Right now I have a list of REITs where the dividend yields are now well above 11% and going higher with each daily sell-off.

These REITs and their dividends will allow me to live a luxurious life in the years to come. And I want you to do the same.

So let me repeat: This current market sell-off is an opportunity.

And sometimes these opportunities hit you when you least expect it.

Yesterday I was at the Dunkin drive-thru getting a coffee. I paid with physical money, and I got physical change back. And it dawned on me that the cash I just received could get me sick.

You don’t think crypto and other “cashless” stocks aren’t going to go gangbusters after this crisis ends?!?

In fact, we have a list of those stocks right here.

Everything is on fire sale, including cruise line, hotel, and airline companies. The U.S. government is going to back them with whatever they need.

The U.S. government announced a $1.5 trillion package yesterday… and said this is just the first pitch in a nine-inning game.

Sometimes it’s just that easy... if you have the courage and patience.

Crisis equals opportunity. In my 26-year career, I’ve never seen one that wasn’t.

And what an opportunity it was!

Take a look at the rally the Nasdaq enjoyed after the crash: 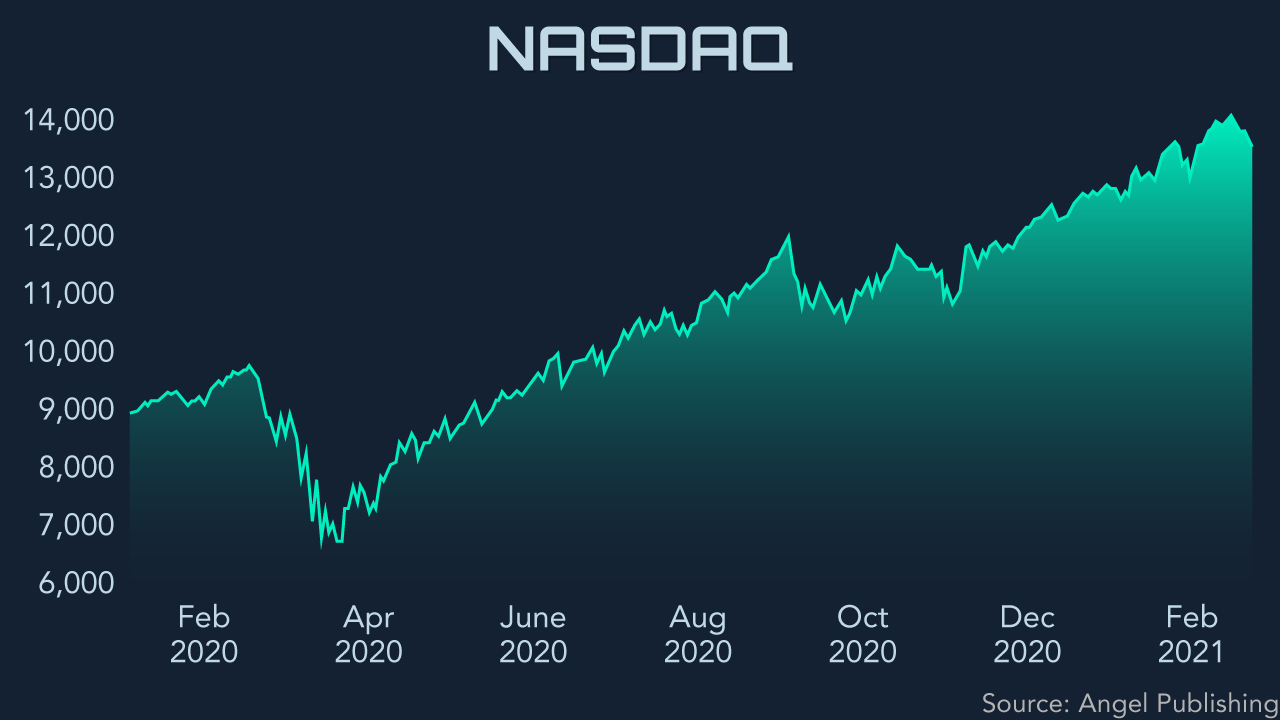 But it gets even better.

Had you invested in those stocks on March 16, 2020 (the day I released the white paper to you), you would have enjoyed gains of:

This is why you read our analysis and predictions: We say things the mainstream financial media are either too scared or timid to admit or are just plain too clueless to see.

So let me predict what is coming next.

The gains will continue. There will be pullbacks and even corrections, but the pent-up demand is there.

Herd immunity to COVID-19 is closer than you think, so stay positive and stay invested.

Because history is about to repeat itself. It was no accident that the 1918 pandemic precipitated the Roaring '20s.

Once this current crisis ends, our built-up anger and feeling of loss will fuel a renewal. People who don’t go out much will become eager to socialize, and the social butterflies will be ready to party until dawn.

During this time of isolation, many of us have had the chance to reflect on the main driver of our happiness: social interaction.

Get ready. This bull market is about to go into overdrive.