The Day They Burned the Price Chopper

Triple Your Money Off This Ag Stock

There are food riots going on around the world. People are burning stores in India, Chili, China, Egypt, and Algeria.

One man was forced to stop selling fruit along a Tunisian roadside because he didn’t have a permit. When he lit himself on fire, the ensuing riots ended a multi-decade-long dictatorship.

People will put up with a lot — corruption, nepotism, cruel laws, and barbaric prisons — but they tend to lose it when they can’t afford food.

This is especially true when they blame the ruling class for their misery...

Food riots have ended reigns in France, Russia, and British India. Today the Egyptian stock market sold off on fears the riots might spread.

According to the UN's Food and Agricultural Organization (FAO), its food price index hit a new high above the previous record in 2008.  Soaring sugar, cereal, and oil seed prices were the main drivers.

This is on top of a relentless 80% climb in prices over the past ten years.

In the United States, the limit for corn-based ethanol has been raised, which drove up the price of cereal.

There were also La Niña-driven droughts in Argentina, the second biggest exporter of corn after the U.S.

If we get one more natural disaster — say, the Mississippi River has another hundred-year flood — the world would be in serious trouble.

The forecast for 2011 is too early to tell with any clarity, but most of what I’ve been reading is that the world’s supply and demand balance for cereals is expected to tighten, with total consumption eclipsing world production for 2010/2011.

This will require a six percent dip into stockpiles.

The real worry is hoarding. When countries start to shut down exports — like Russia did after its historic fires, or India, Bangladesh, and others did in 2008 — those who need to buy agricultural commodities will chase the price higher.

You will see the results on your store shelves.

Here is a chart that shows U.S. food stamp participation: 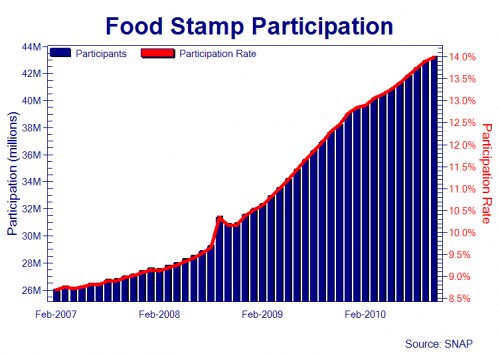 As you can tell, it’s been a hard couple of years...

The percentage of people in this country who are now on food stamps is 14% — or 42 million people — and that number seems to be constantly increasing.

What you may not know is that food stamps are adjusted for inflation once a year using four-month old data.

I’m not exactly sure what would cause people in this country to burn down the local Safeway... $20 coffee, $5 Hamburger Helper?

But people with no house, no retirement, and no job don’t have a lot to lose...

The price of all hard assets will continue to go up due to increased global demand and falling global currencies.

My portfolio is heavily invested in oil, coal, and agriculture.

I’ve discovered one company that bought up 14 silo/grain elevators last year. These can hold 45 million bushels.

The company uses 85% of this capacity for trading. As the price of grain goes up, this company makes money on their physical inventory.

There is a good chance it will triple this year once it's “discovered” by Wall Street...

It's free to members of Crisis & Opportunity.