The Bubble That Won't Pop

There have been 62 trading days over the past three months.

But we’ve managed to pack a whole year’s worth of indigestion into those few days...

The S&P and Dow are bouncing off all-time high levels and have been since the markets recovered in the first quarter: 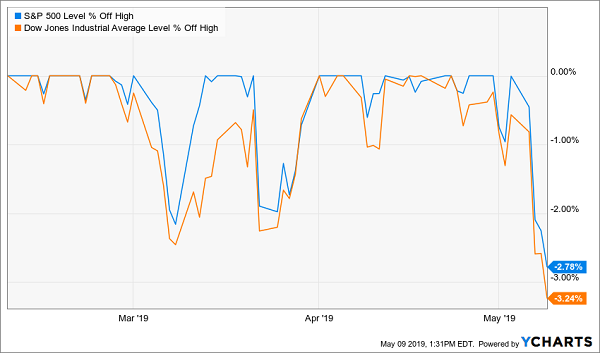 And some of the best stocks of 2018 are becoming the dogs of this year. It’s a risk-on, risk-off market.

Good news or a positive rumor gets investors flocking to high-growth, higher-risk investments.

And then the next day, something else happens to make them extra-cautious. And those momentum stocks that just ramped up start to tumble back down.

If you want a pretty great example, look no further than last year’s blockbuster investment: cannabis.

The Grass Isn’t Getting Greener

Most of the big names in cannabis stocks — Aurora, Aphria, Canopy — are up so far this year. But that doesn’t mean it’s been a smooth ride. And it doesn’t mean they’re all faring so well, either.

Tilray Inc. is down a solid 34% this year after blasting up to a $20 billion valuation last summer.

And the last three months have been especially tough on almost all of the major producers.

In 62 trading days, Tilray’s only been in positive territory on four of them. It’s been by far the worst performing cannabis major.

But the others aren’t looking that hot, either. Cronos is down 26% in the past three months. And of those 62 trading days, it was in the black for less than half.

Canopy is next. It’s up about 4% in three months. And it spent 35 of 62 trading days in positive territory.

Aurora brings in the top spot with an 11.5% gain and 47 days in the black over the last three months.

I don’t know about you, but even 15 losing days in three months is a little much for me. Especially if I’m only getting an 11% gain in the end.

I could have done about that well with an S&P 500 ETF: 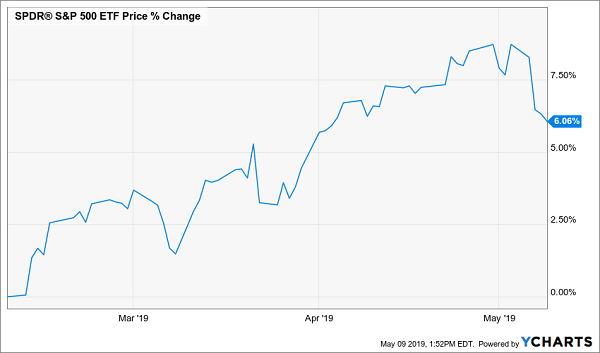 Sure, it’s only a 6% gain, but I didn’t have to stomach a half-month’s worth of losing and a ton of volatility to get it.

And the major cannabis companies struggling shouldn’t really surprise us that much. Their big market is Canada. And the biggest gains from last year came as we approached legalization there.

But Canada’s cannabis bubble is over. And it’s time to look elsewhere for massive gains. Not an entirely different sector, however. Just a different location.

Coming Down to Go Up

You see, cannabis sales in Canada are flat. The initial excitement wore off, and revenues are not growing the way a lot of investors had hoped.

So every time a Canadian cannabis company reports earnings, the market gets more disappointing news. And every time research on the Canadian market is released, the fact that Canada is not an economic superpower gets driven further home.

The real money in North America lies a few miles to the south.

And that’s where investors need to head in order to secure those blockbuster returns we saw in Canada.

I wrote about Verano Holdings earlier this year. It was one of the IPOs I was most excited about in the cannabis space.

Well, it’s public now. But that didn’t happen through an initial public offering. The company got bought for a hefty premium by Harvest Health and Recreation (CSE: HARV).

Shareholders saw Harvest Health’s stock head from under $7 up as high as $14. And Verano’s investors made a tidy profit as well.

The United States is the real market for cannabis. And the smart money knows it. But the problem is that even the smart money doesn’t know who will become the Auroras and Canopys of this market.

And it can’t predict the whims of politicians, either. After New Jersey failed to pass a legal cannabis law, iAnthus shares dropped right back down to where they came from.

Village Farms is a bet on international sales of cannabis and perhaps some in Texas. But its stock has dropped from $23 to about $15 after a 360% run-up. That’s still a 150% gain for some. But it’s a loss for others.

And Village Farms is a greenhouse company. It grows vegetables. Look at the profile on Yahoo Finance that hasn’t been updated to reflect cannabis. It says:

Nothing about cannabis until you look at the investor presentations and press releases, actually. Not on the website. Nowhere.

So there’s a good chance Village Farms stays a vegetable company and people who jump on its cannabis bandwagon get burned like a pre-rolled joint.

But there are companies out there with years of experience in the cannabis industry. And there are a few of those that are pretty much a sure bet to grow in value.

But there’s only one that guarantees you’ll get paid for owning shares. And it’s outperformed all of the companies I’ve already mentioned so far this year, too.

Cannabis, in case you’ve forgotten, is still illegal at the federal level in the United States. That means the cannabis companies in one state can’t legally do business in another under the same umbrella. Once you start getting into interstate trade, it’s the federal government’s rules.

But this company has a special deal to let it operate in cannabis markets across the country.

It’s pretty lucrative for everyone involved, too...

As long as the company pays $0.90 of every $1 it makes in the cannabis industry to investors, it can operate wherever it wants with impudence.

So every time a dime bag of cannabis gets sold, investors get $9 from the proceeds. And let me tell you, a lot of dime bags are getting sold.

Last year, the company paid investors nearly $12 million. This year, it’ll be paying even more thanks to the rapid growth of U.S. cannabis.

But it’s not getting any attention because it’s not one of the “exciting” companies...

All the Green with None of the Grass

This company isn’t one of the big growers you hear mentioned on CNBC. And it’s not one of the little U.S. operations with a few dispensaries and a processing plant, either.

In fact, this company doesn’t really have anything to do with growing and selling cannabis at all. But its continued existence is critical to the whole industry.

You read that right. It’s not a grower, processor, or retailer. But without the assets it brings to the table, the cannabis industry in the U.S. couldn’t exist at all.

It costs a lot of money to run a cannabis farm. If you’re growing indoors, you’re looking at about a $20,000 per month electric bill just as a start. Even outside, you’ve got to buy land, pay workers, purchase licenses, and pay taxes.

But if you go into Bank of America or Wells Fargo to get a business loan, you’ll get laughed right on out the door. U.S. banks are not going to lend money to someone the federal government considers a drug dealer.

And that’s not going to change until there’s a legal change at the national level. That could happen this year. It could take decades. There’s no guarantee how fast or how slow our politicians will work.

And even when it does happen and cannabis companies can head to BofA for a loan, there’s still a need for funding from other sources.

And that’s part of what this company provides. If you’re looking to expand your cannabis operation but don’t have the dough, it’ll get you moving again.

But that’s not the biggest benefit this company provides to the industry. And it’s also not the reason the industry can’t exist without it.

A Place to Live, a Place to Grow

The one thing you have to have, no matter how you’re planning to grow your cannabis, is land. And there’s only so much of it that’s perfect for growing cannabis.

That’s the real monopoly this company holds. And it’s why the cannabis industry needs this firm to stay in business and get a whole lot bigger.

All the money in the world means nothing if you’ve got no place to plant your seeds. Even the big U.S. banks can’t serve that need.

This is the only company that can. And it’s still flying under the radar.

Get Paid While the Country Gets High

I uncovered the company a little over a year ago. And I let the members of my investing community know about it immediately.

We’ve already racked up over 300% profits. And that’s not even counting the legally mandated payments we’ve been collecting the whole time.

But I want to let you in on the opportunity, too, so I asked my boss — the founder of our whole company — to help me drive home the profit potential and share this investment with the whole Wealth Daily community, too.

You can watch our presentation by clicking this link. I highly suggest you take a few minutes right now to check it out.

Or, if reading is more your style, you can access a written report with all the details by clicking here.

Either way you get the information, make sure you don’t wait.

Shares are up more than 25% this quarter, and another payment is right around the corner.

You don’t want to hesitate and miss out on more gains or those juicy payments, either.