There are no two ways about it... It's been a crazy week for the world's favorite electric vehicle maker Tesla Motors (NASDAQ: TSLA).

And I'm not just talking about the dramatic turn the company's stock took earlier this week.

I'm talking about where the company has been predicted to go, by at least one prominent rainmaker, in the next decade.

"That’s assuming they do 10 million cars, and that’s without the battery business, just on the car business," Ron Baron, CEO and founder of NYC-based Baron Capital, opined in a CNBC interview this past Tuesday.

Widening the comparison even further, that's about twice the revenue of Walmart (NYSE: WMT), the world's biggest company by revenue in 2018.

But here's the real kicker... That $1 trillion is only the beginning.

"Elon says that the battery business is going to be as big as the car business," Baron went on to say. "In addition to that, when I'm thinking 10 million cars, the last conversation he [Elon Musk] had, he said 20 million cars."

In terms of gross revenue, that's what the world's top 10 automakers combined made in 2018, with Tesla coming in at spot #10 — and that's on the low end.

$4 trillion dollars? From one company?

That's the GDP of Germany, the world's fourth biggest national economy, all from one single firm, producing basically two lines of products.

Is this realistic? Is this possible? Is Baron smoking the same thing that Elon is?

To answer those three questions as concisely as possible: no, no, and maybe.

Something Doesn't Add Up

By contrast, the cheapest Tesla, the base Model 3, currently sells for around $41,000, with upgraded models going for upwards of $60,000.

How anybody besides Musk, whose relationship with reality is tenuous at best, can rationalize a 10–20 million-unit year at those prices, I have no idea.

Well, that's not entirely true. I do have one vague idea.

At this week's peak prices, that's about $1.4 billion, or 5% of the fund's total holdings.

If even the most conservative version of this fairy tale comes true, that would mean at least a 10x gain over current share prices.

In the most bullish scenario, it would take Tesla stock to around $15,000 per share.

So, as a pitchman, perhaps Baron's opinion isn't too hard to pick apart.

Nevertheless, in an industry where the biggest competitor has been around since the 1930s (and globally prominent since the 1960s), these sorts of prognostications seem delusional, to say the least.

But did we really need to see all the numbers and comparisons to make that determination?

Not really, because the moment the words "Elon thinks" left Baron's mouth, the cat should have been out of the bag.

This isn't a prediction. It's just a word salad with some random numbers sprinkled on top for flavor.

The real world will have different things to say about what actually happens, and we're already starting to see that reality slowly creeping back into the stock price.

After hitting an all time high of $968 on Tuesday, shares are already down 28% to just under $700 as of early this morning. 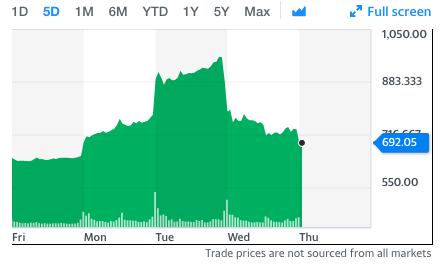 Where they will be by the time you read this article this afternoon, I won't even attempt to guess.

All of these predictions imply a lot about where the automotive market is, and where it will go in the coming years. But the question of whether Tesla will continue to succeed at all has yet to be answered.

Though today it seems that the company's rise is unstoppable, if we've learned anything over the last decade, it's that nothing is guaranteed when it comes to the EV market — especially when Toyota, VW, Mercedes, GM, and the rest of the big names are all clamoring to put their own hybrids and EVs, many of which are far more affordable than even a modest Tesla, into the driveways of as many consumers as possible.

But competition and demand are just two hurdles Tesla will have to overcome in the coming years.

There is one other problem that none of the fund managers, analysts, or company hypemen are talking about.

The problem isn't economical, but technological.

What Elon Isn't Telling You

You see, Tesla's cars, each and every one of them, from the first Roadster it ever put on the road, to the latest concepts it's wheeled out to the oohs and aahs of their adoring fans, is fundamentally flawed.

It's not a problem with the battery, as many would assume. Rather, it's an issue with the drive system... specifically, the electric motor.

It's not a problem isolated to Tesla products, either; it's a problem shared by every vehicle in the world that derives its torque from the flow of electrons.

Only one company in the world has been able to overcome this issue so far.

This is a technical issue, but it's not particularly hard to understand.

To get the full story on just how profound this problem is, what it means for the automotive industry as a whole, and, most importantly, the company that managed to patent the solution, click here.