Take a BIG Step Back and Don't Jump!

Markets have been breaking down the past several weeks.

And that’s because it’s not just individual stocks breaking down anymore. It’s the whole indexes.

It’s the mega-cap multinationals that people had fled to for safety.

They’d been holding the averages up because they’re just so massive.

But now they’re moving down into bear markets too.

And that’s dragging down the whole shebang.

I’m sure you were already aware of that, though. You’re pretty in tune with what’s going on out there.

I mean, you are an avid reader of Wealth Daily, so you've got a pretty big leg up on the average Joe.

But in case you’ve been paying TOO MUCH attention to what’s going on right now, I’m begging you to take a break and HUGE step backward…

When Things Look Their Worst…

With all the headlines about doom and gloom coming our way, it’s easy to get caught up in the fear.

It’s easy to think this is the end of the world and nothing good will ever come your way again.

I mean, just look at this year-to-date (YTD) chart for the Dow Jones Average: 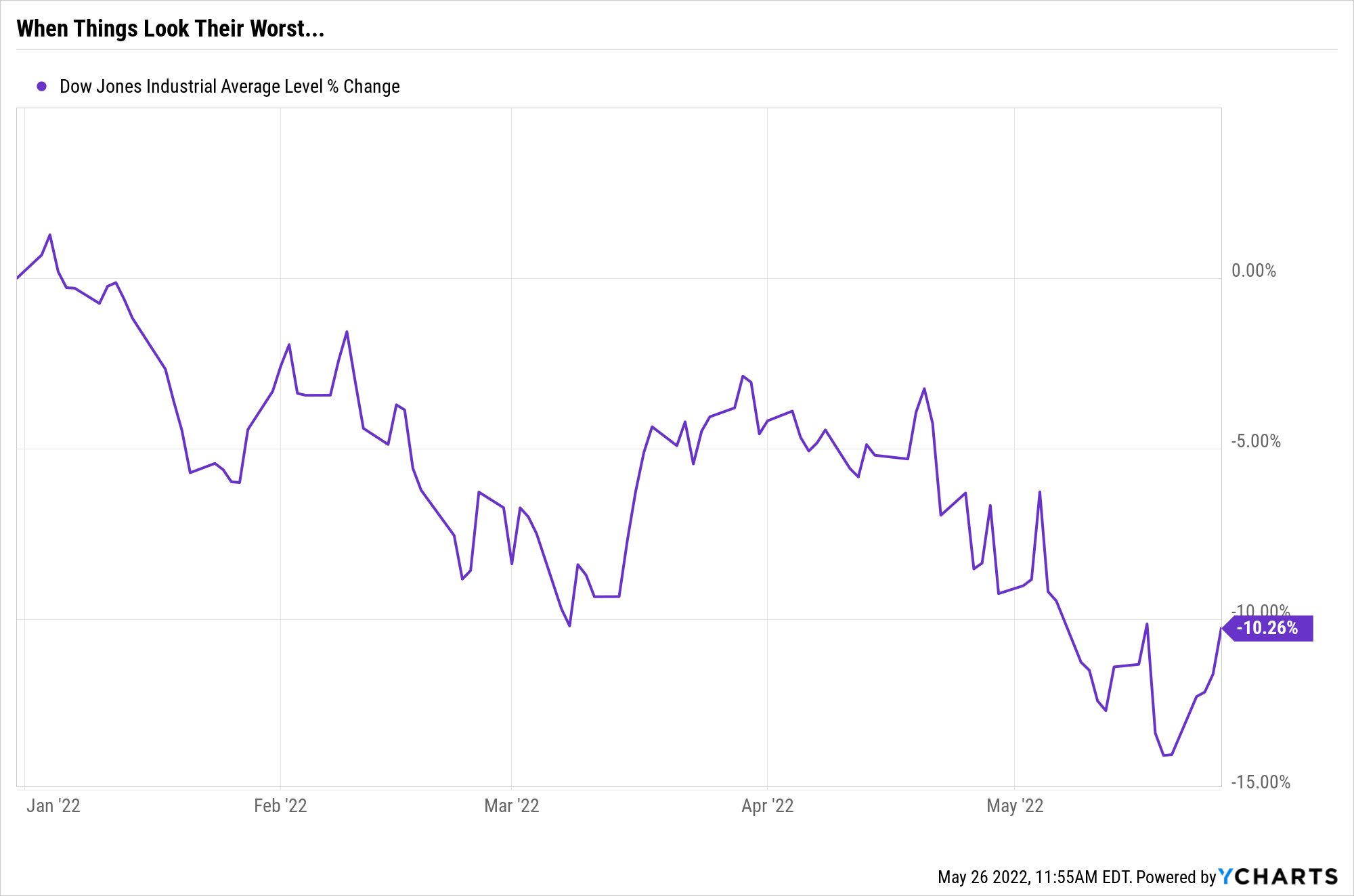 That’s pretty ugly. And it’s the top performer of the big three these days.

But the end is most certainly not here.

And it’s at times when things look their absolute worst that you really need to take a big step back.

Because as bad as it seems right now, it’s not really that terrible. And it’s going to get better.

That’s why you’ve got to take a big step back: so you can see the bigger picture.

Stocks are dropping in the short term and they might drop some more.

But they go up in the long term. You’ve just got to zoom out to see that: 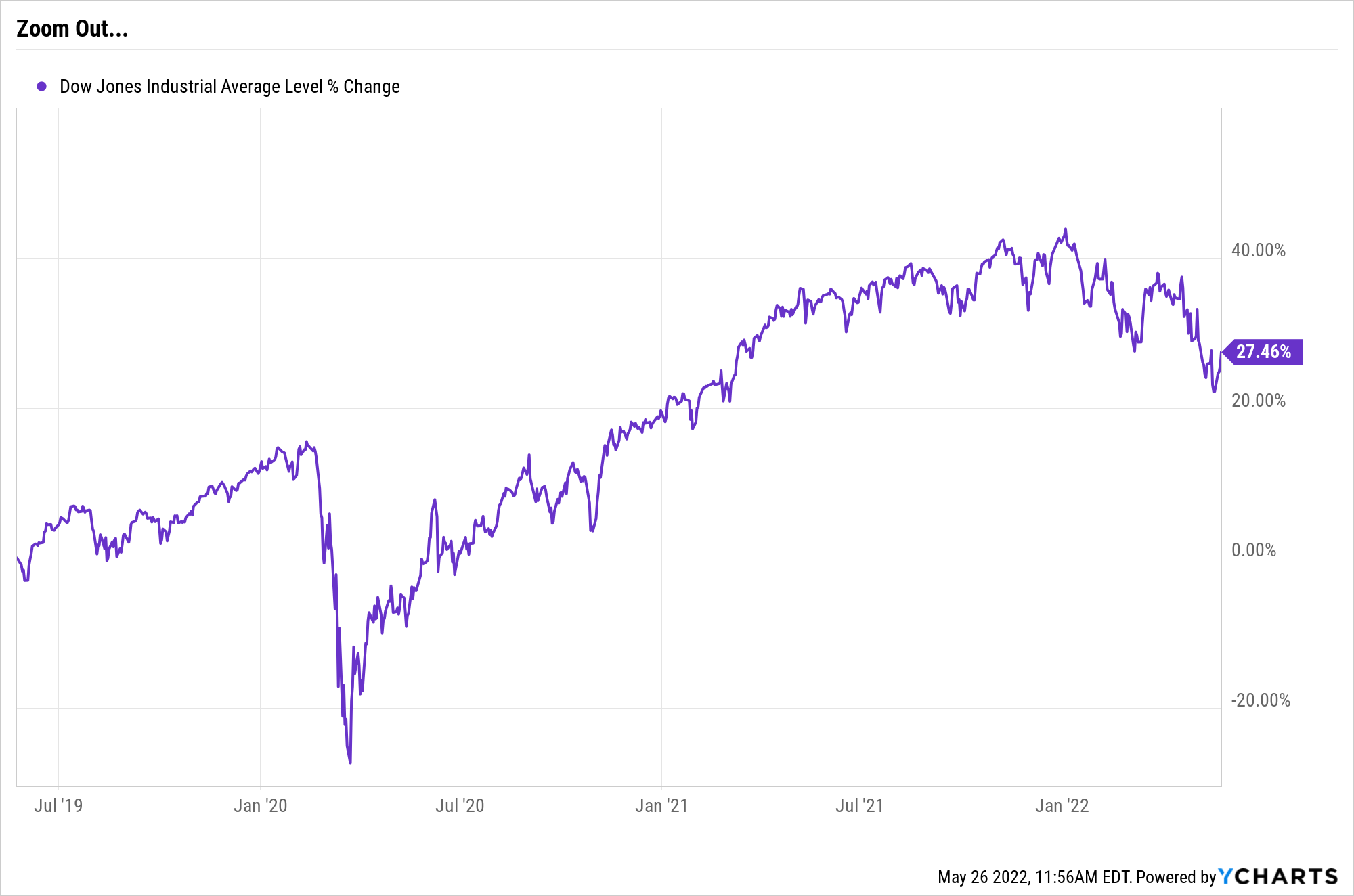 Feel a little better yet? No?

OK, then zoom out again… 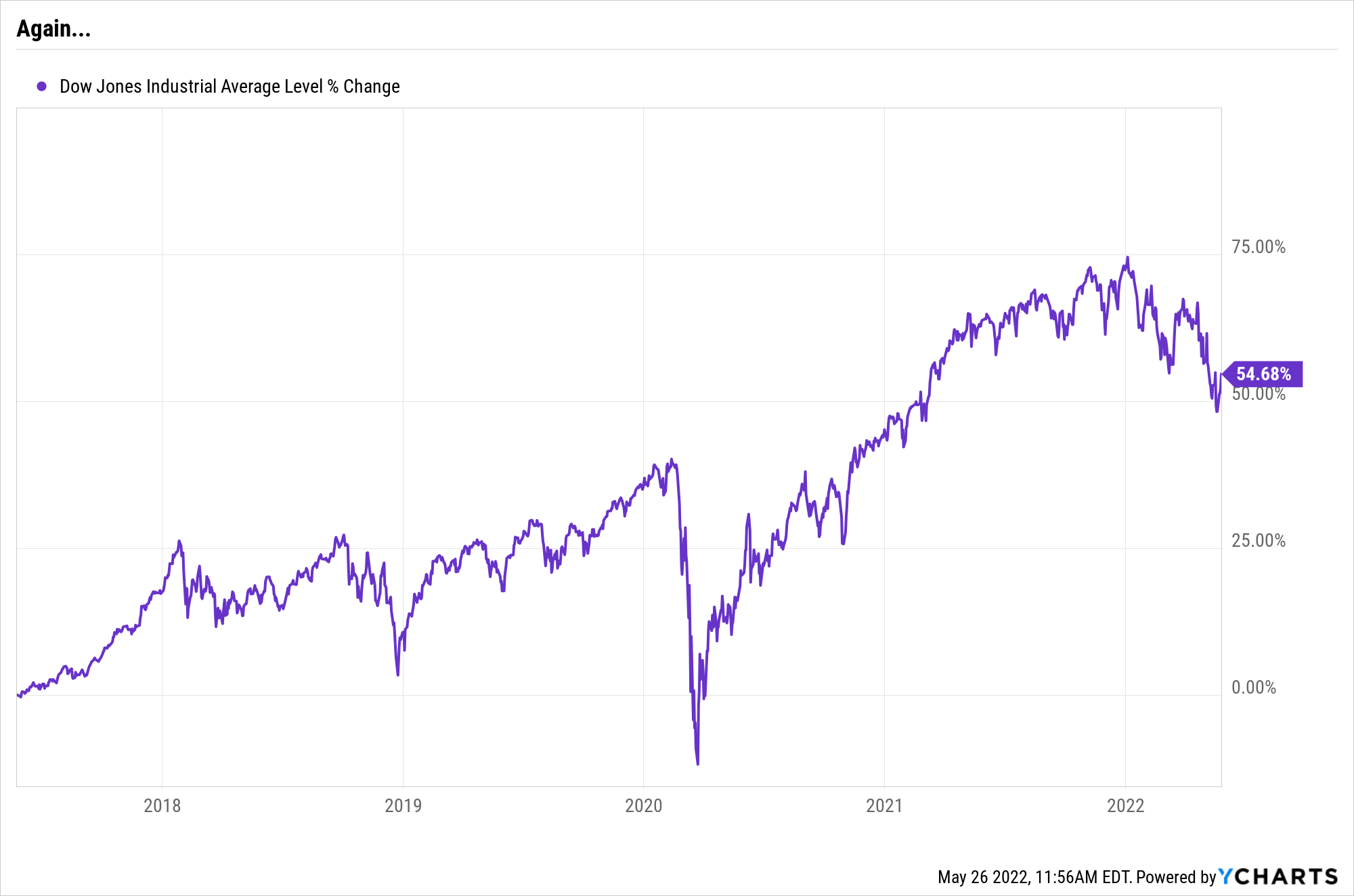 Still not calm? That’s OK too. 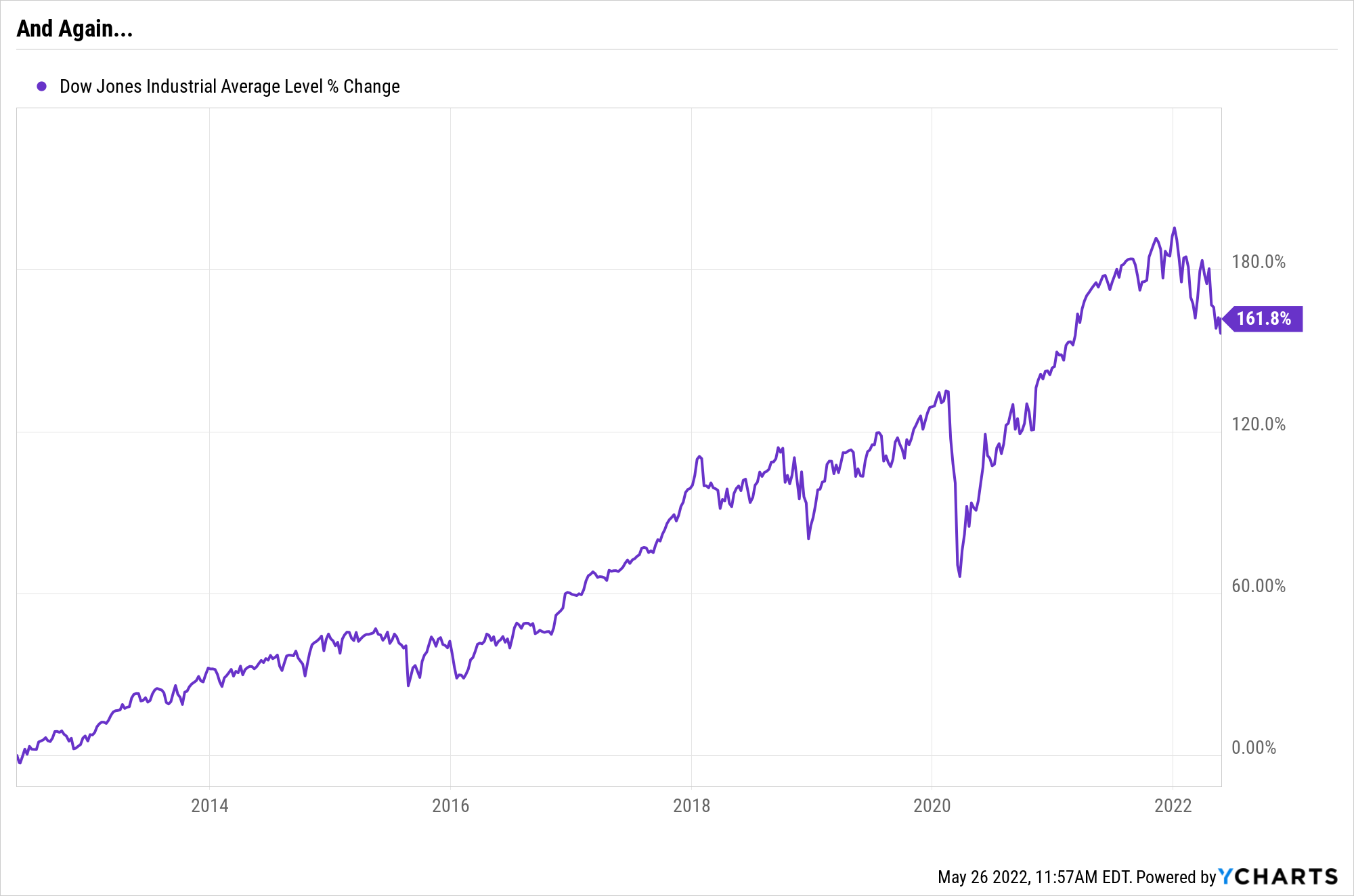 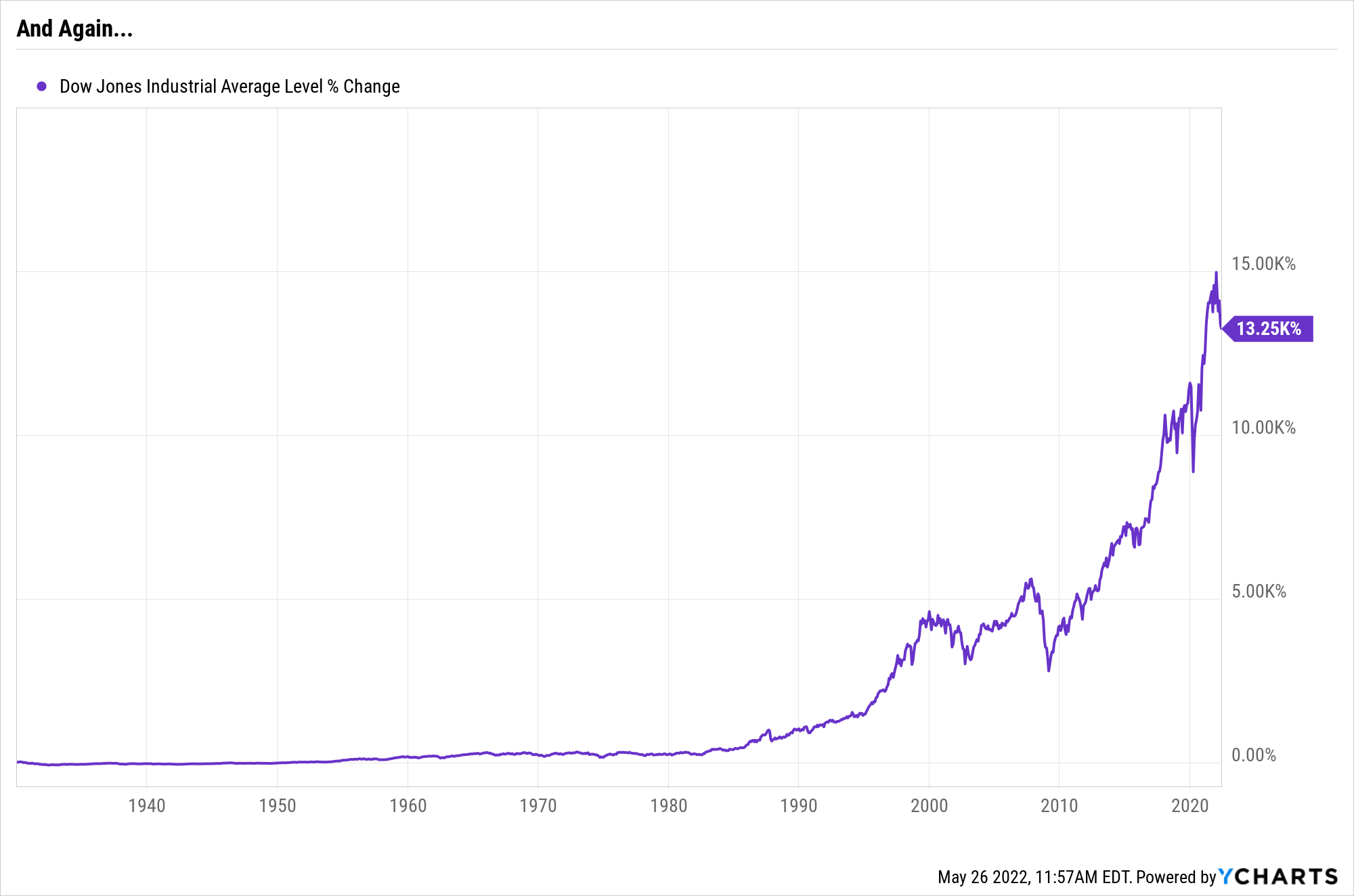 Crashes happen, but markets recover. Stocks go up far more often than they go down.

It’s not going to be any different this time around.

And that leads me to one more image I want to share with you before I let you get back to your Memorial Day (or just your average Monday, depending on where you are).

It’s a screenshot of a conversation the owner of Angel Publishing and I had just the other day:

I wanted to share it today for two reasons...

First, it’s an inside look at what we’re talking about at the offices over here.

And, spoiler alert: We’re not talking about selling.

But second, it’s to show you that, even as professional investors and analysts, we aren’t trying to time a market bottom.

That’s because we know that a year or two from now, we’re not going to care where the bottom was in 2022.

We’re going to be too happy about all the gains we raked in because we weren’t afraid stocks might fall a little more before they went back up.

That’s the real message I wanted to share with you today.

No sales pitch. No secret investment strategy. No particular stocks, even.

Just a calm voice speaking the good old-fashioned common sense that so many market pundits and internet analysts lack.

The bottom line is this...