Stocks are in a Raging Bull Market

How Much Did You Make in July?

Welcome to another August...

We're now officially in the dog days of summer, and I plan on spending the last few weeks exactly where I started the season — at the beach house.

I finally bought my parents a golf cart so they can get around the beach community.

I see these golf carts everywhere. I bought a very basic one. In fact, it was used.

When I went to the dealership, I was surprised to learn how tricked out you can get one of these things: sound systems, cargo rack, seat belts, headlights, three-row seating, lift kits...

One of these days, I'm going to figure out how to invest in the "leisure" golf cart market, because that seems to be an industry in a bull market.

Then again, everything is in a bull market — except, of course, for precious metals.

July was a banner month for stocks.

The fact that smaller stocks — and now the tech-heavy NASDAQ — are leading the market should give you a reason to be bullish.

As I wrote just last week, when small stocks outperform bigger stocks, it's a sign that speculation has returned to the market.

Because there's a psychological advantage to smaller stocks. Investors think returns in smaller stocks will be bigger than in large-cap stocks.

Furthermore, speculation has returned to two specific markets with a vengeance: oil and biotechnology. 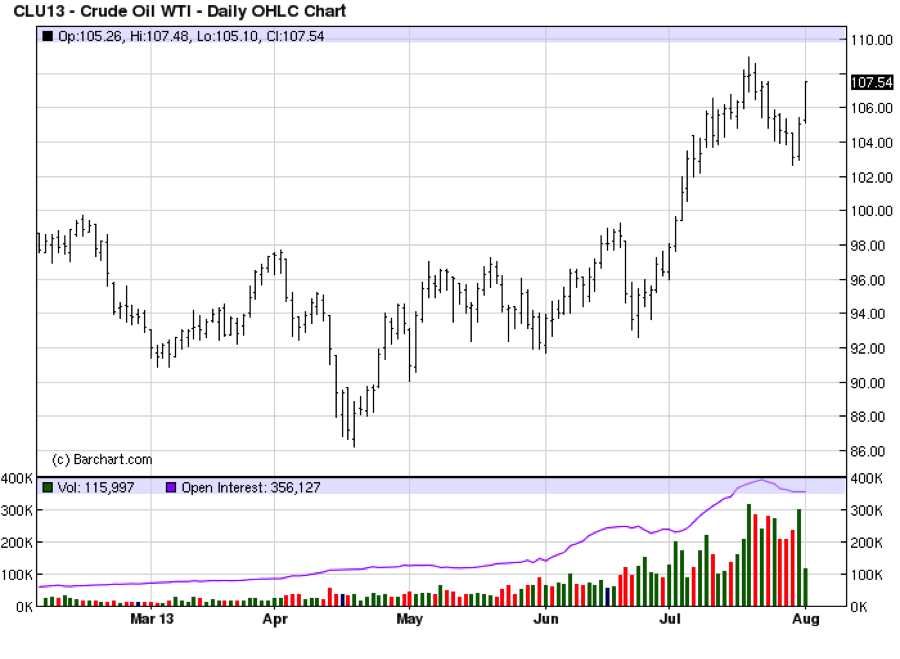 According to a Bloomberg report out earlier this week:

Saudi Prince Alwaleed bin Talal told Oil Minister Ali Al-Naimi in an open letter that the kingdom won't be able to raise production capacity to 15 million barrels of crude a day as planned, and that he disagrees with him over the impact of U.S. shale gas output.

The prince published the letter on Twitter, saying there's a "clear and increasing decline" in demand for crude from members of the Organization of Petroleum Exporting Countries, particularly Saudi Arabia. The kingdom is now pumping at less than its production capacity as consumers limit oil imports, Alwaleed said.

"We disagree with your excellency on what you said and we see that raising North American shale gas production is an inevitable threat," the billionaire prince, founder of Kingdom Holding Co. (KINGDOM), said in the letter.

Al-Naimi said in Vienna on May 31 that he isn't concerned about the increasing production of oil from shale formations in the U.S., nor does it represent the first time the OPEC has faced a surge in output from outside the group.

Alwaleed also said that Saudi Arabia's reliance on oil to fund 92 percent of this year's fiscal budget "is contradicting many of the state's plans to diversify its income sources."

"The world's and the West's dependence on oil is in continuous decline and this 'reality' is known by everyone," he said in the letter. The prince urged the monarch, King Abdullah, and the government to reduce Saudi dependence on oil and increase the use of renewable energy sources to support local consumption.

Who can blame him — especially when you see a chart like this: 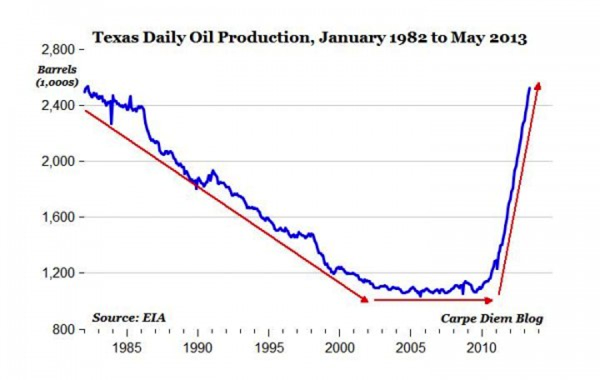 As long as the price of oil remains above $90 a barrel, the shale revolution will continue.