Stacking the Deck in Your Favor

How to Exploit Inefficiencies for Massive Gains

A couple years ago, I wrote an article about a stock market anomaly that you can harness for easy gains. I try not to repeat myself when it comes to topics, but given the timing, I’m not sure anyone really took my advice to heart.

You see, I wrote about it back in January 2017. And 2017 was a pretty easy year to make a profit in the stock market even if your strategy was to throw darts at a list. From the day I wrote that article in 2017 to exactly one year later, the market did nothing but go up.

But exactly one year later, in January 2018, profits got tougher to make. And markets got a lot more volatile.

We saw the markets start the year off heading up to new highs. Then we got a pretty hefty correction that lasted most of the spring season. But confidence recovered, and by the end of the summer, we were at all-time highs again.

Then the stock market fell off the edge of a cliff in December. It started to slide in October. But on December 28, many investors were convinced we were already in another recession as the averages tanked.

And this year, while we’ve gotten rallies that took us back to new all-time-high levels, we’ve also had our share of corrections as the markets bounce around and try to figure out where to go next.

That’s why I’m convinced now is the best time to revisit this strategy that can help you ensure you’re making all the right investments.

In case you haven’t heard of the efficient market theory, I’ll break it down really quickly.

It pretty much says that if information is readily available to every investor, then you can’t make a profit. Basically, if the market is efficient, you can only gain through inside information.

But I don’t believe that hogwash for one minute. And you shouldn’t either.

If it were true, everybody would have the same profits and the same losses. But that’s not the case. Some people lose everything betting on stocks. But others build fortunes through investing.

Markets are inefficient in how information is absorbed. And that’s an exploitable flaw.

Watch Your Worries Drift Away

Back in the 1960s, a couple researchers noticed a market anomaly around earnings season. And they wanted to see if it could be exploited for profit.

So they delved into years’ worth of data trying to disprove their own theory (because that’s what good scientists do). And in the end, they came away with the same strategy.

Hundreds more studies followed. And while none could explain the anomaly, every single one of them confirmed that it does exist. And it is exploitable.

It’s called "post-earnings announcement drift" if you’re not a fan of brevity. But most of us just call it PEAD. And it’s a powerful force.

The simple explanation is that when companies report earnings, their stocks do one of three things: they go up, down, or sideways.

If earnings and guidance are in line with expectations, you’re not likely to see a huge change in the stock’s price. If earnings or guidance fall short, the stock’s going to drop.

But if management comes in with an earnings beat that surprises analysts, the stock’s going to go up. And depending on how big the beat was, it could move up a ton overnight. 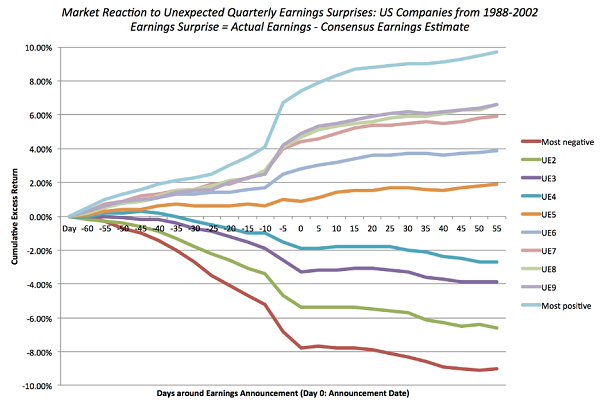 So most of us are going to miss those major post-announcement moves. But that doesn’t mean we can’t profit from them.

And that’s where PEAD comes into play. In every study performed over the past half-century, companies that give investors a positive earnings surprise keep moving up for days, sometimes months after.

The Power of PEAD

The average gain on stocks that surprise the market with earnings is about 10%. And depending on the study, that comes between a week and a few months.

That means the easiest way to exploit this anomaly is to buy the stock and hold onto it. There’s usually a bit of a correction the day after a surprise, though. Especially if there’s a big gap between the closing price before the announcement and the opening price after.

That’s people who got lucky and bet on earnings cashing out their profits. But after that little pullback, shares tend to start heading back up toward that 10% gain.

Take Nike, for example. It made major headlines by beating the pants off of earnings estimates for the quarter. And shares went from $87 that evening to almost $92 the next day.

But as profit-takers took profits, shares slid back into the $90 range by the end of the day. That was this Wednesday. But by Thursday (the day I’m writing this), they’d popped back up to $92.

As I write, they’re holding that level. But if history is any predictor, they’ll keep drifting higher for as long as another three months.

But if waiting as long as three months for 10% gains doesn’t sound like a good time to you, there’s a way you can push PEAD profits to an entirely other level.

You’ve got to take a little more risk. But the potential rewards are immense.

Let’s use Nike as an example again. If you’d waited out the dip on Wednesday and scooped up shares at the absolute bottom, you’d have made about 1.6% so far. Keep in mind I’m writing this early Thursday afternoon.

But if you did like I did and waited for the dip to buy some weekly call options, you could have made nearly 200% profit in less than a day.

I’d have been ecstatic over 200% in less than a day. But I’m not upset about 50% either. And that’s how you put the PEAD pedal to the metal.

You’ll note that I bought weekly options. Those aren’t available on every company. And they’re a lot more risky than monthly ones because they have less time until they expire and usually see less trading volume.

But since there’s so little time to take advantage of them, prices move very fast in relation to the stock. And they’re usually a lot cheaper since there’s pretty much no time-value built in.

If you’re not in the mood to sweat it out at the end of the week, you can reduce your risk by looking at options that expire farther down the road. A month or so will give you some time to see if your position is paying off. And it’ll make it easier to get out in the rare case you need to cut losses.

Buying options with strike prices closer to the current stock price reduces your risk a little more, too. The stock doesn’t have to move up as much to put your options in-the-money.

But that’s all going to reduce your potential profits as well. Options that don’t expire for a while are more expensive. And options close to the stock price are, too.

But you can still use them to turn that 10% post-announcement stock drift into a triple-digit gain.

Only one or two companies are scheduled to report today. And nobody is going to report earnings over the weekend.

So you’re going to have to wait a little before you can put this plan into action.

But next week, you’ve got 30 chances to exploit this inefficiency and put some PEAD profits in your portfolio.

Thirty companies are reporting in the coming week. Not all of them are going to be winners. But the ones that are will keep on rising. So keep your eyes out for earnings beats and get your dry powder ready to deploy. And remember: the bigger the beat, the bigger the drift.

Now go enjoy your weekend, and dream about how you’ll spend your newfound wealth come next week.