How many gold and silver investors are still hanging in there? Anybody?

Well, chins up, precious metals fans — because 2014 should see a broad range for precious metals prices, from slightly below to well above current levels, with an even broader range expected for silver...

“Silver To Hit New Highs Despite Bearish Forecasts,” reads a headline from Silverseek.com.

“One Trigger Event is About to Send Silver to All-Time Highs,” proclaims another from The Market Oracle.

But even large, international commodity research firms see the metals bull run as having plenty of life left. Research and consulting firm CPM Group expects to see silver “continuing a secular bull trend that began at the turn of the century.”

Bank of America’s Merrill Lynch (NYSE: BAC) wealth management division expects silver to reach $26.38 next year, up a tidy 35% from current levels. Analysts explained that an improving global outlook in economic activity would buoy silver, which has numerous industrial uses, and should help it outperform gold in 2014.

But we have to be balanced, as there are many other predictions to consider...

Meanwhile, for its guess on the number of jelly beans inside the jelly bean jar, Thomson Reuters GFMS last month released its call for an average silver price of $20.42 next year, citing a “strengthening U.S. dollar and an improving economy plying investors away from the safe-haven investments of gold and silver to equities and bonds.”

And of course, we have Goldman Sachs (NYSE: GS), never shy about killing the party with its 2014 estimates of 15% lower gold prices, which would drag the more volatile silver down at least 20% to below $16...

Obviously, supply and demand is always to be considered when projecting future prices.

U.K. Barclays Bank believes “[the] silver mine supply looks healthy and continues to grow unabated across regions. Having grown by an average of 3% y/y since 2004, we expect mine production to grow 1%-2% y/y in 2013 and in 2014,” which it revealed in its September report.

Though increased supply drives prices lower, if demand increases at a faster pace, any extra supply would be quickly soaked up and possibly result in a shortage.

Much of that demand will come from an expected improvement in global industrial production. “By 2014, a somewhat more sustained recovery is envisaged,” the GFMS report indicated. “A global recovery of the auto market and a continued rebound in housing and construction will lift industrial demand for silver to a record 511 million ounces by 2014.”

Since “over half of all silver is used to make cars, computers, photovoltaic power systems and… synthetic fibers… an increase in global industrial activity” would predictably result in “an increase in the industrial demand for silver,” the report stressed. “Some products [such as electronic pads] did not exist until just a few years ago, so although their individual silver content is modest, they nonetheless represent silver demand that simply did not exist before.”

Of course, we mustn’t omit the investment demand for silver coins and bars, which has surged from China to America and everywhere in between.

“Investors are expected to step up their purchases, backed by expectations for strong capital appreciation amid rising industrial demand for the metal. In this scenario, silver prices could rise rapidly, possibly touching fresh record highs,” CPM predicts — even if the firm is willing to give silver as much as 10 years in which to do that.

Yes, these “reputable” firms are concerned about their reputations, and so they are naturally going to play it safe with their estimates.

But once you pop the cork, you’ll be hard-pressed to get it to fit back in the bottle again...

When investor interest in silver shot like a cork back in 2007, the silver genie was let out of its bottle. No matter how low the price goes now, we’ll never be able to bottle up silver’s investment demand again.

Have a look at the U.S. Mint’s American Eagle silver coin annual sales (blue line, left axis) from 2006 to present, superimposed over a monthly chart of silver’s price (right axis) in the graph below. 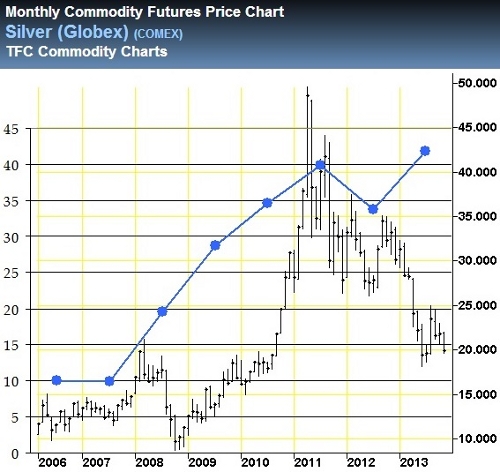 When silver prices broke out in late 2007, even a 50% correction the following year couldn’t turn investors off the metal, with American Eagle silver coin sales jumping from 9.9 million coins in 2007 to 19.6 million in 2008.

The same has been happening during the current correction.

Despite silver’s plunge from $31 at the start of 2013 to some $19 today — a drop of over 38% — American Eagle sales have hit a record 42 million silver coins in a single year, up 24% over last year’s sales. Though silver prices are back down to 2008 levels, coin sales are more than double what they were then.

The Fed’s Contribution to Silver

Yet we have to appreciate that despite robust industrial and investment demand, silver is still a precious metal strongly correlated to gold. And whatever upsets the gold price will upset silver’s too… namely the expected upcoming reduction of the U.S. Federal Reserve’s monthly bond purchases anticipated to begin at the end of Q1 next year.

Even so, the hit shouldn’t last long, nor should it be deep, since the Fed has repeatedly reassured the markets that ultra low interest rates will remain in place for an extended period of time, possibly into 2016 or even 2017.

Remember that the monthly bond purchases were not the cause of silver's and gold’s rise from 2001 to 2011, as the purchasing program was introduced in late 2012. It was low interest rates that propelled the metals higher.

Thus, the removal of the monthly buying program will not have a lasting impact on the metals’ prices beyond the initial announcement, since the real driver of the metals — low interest rates — will be around for a few years more.

Something More Important than Predictions

So, what good is it then to have such a wide spectrum of predictions noted at the outset?

What do such diverse expectations really tell us about silver’s future?

All they really tell us is that no one has a clue what the metals will do. Scan the Web back to the 2008 correction, and read what analysts were forecasting for 2009... I remember calls for $400 gold and $5 silver.

When we’re done laughing at ourselves, we should pour ourselves a warm cup of whatever keeps us relaxed, lean back in a comfy recliner, and weigh it all. After all is said and done, when everyone has finished speaking and presenting their cases, there's just one thing to take away from all these predictions...

We’re better off not paying any attention to them!

Because for every bullish expert you show me, I can show you a bearish one and a neutral one.

A sound investment plan requires sticking to long-term allocations in a diversified mix of sectors, only one of which is precious metals.

Once we have chosen the desired amount to invest in precious metals, it is simply a matter of restoring that percentage allocation as prices change over time.

Following such a plan would allow you to take advantage of price changes between your holdings, such as silver’s ratio to gold. As silver cheapens relative to gold, your allocation plan would have you shift some funds from your gold position into silver, and then back the other way when silver outperforms gold.

The end result is a buy at lower prices and a sell at higher prices, without ever needing to follow anyone’s numbers.