Silver is Now Rarer than Gold

Most investors assume that because silver is almost 50 times cheaper than gold, it's more abundant. 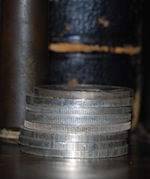 This fact is often overlooked by even the most seasoned silver investors. And it's this lack of silver stockpiles that has become one of the most critical factors in what could jolt prices, lifting silver into an entirely different asset class all together.

So forget $100 silver — $100 is now considered a timid prediction. Some experts are now calling for silver prices on par with gold.

Let me quickly explain how we got here. Global silver mining has increased significantly over the past two decades.

Silver output has more than doubled since the early 1990s in places like Mexico, Australia, and Peru. Other countries have seen even more dramatic production spikes. In China, a relatively new major supplier of the metal, silver mining has scaled up from less than 10 million ounces in 1991 to more than 100 million ounces today.

But despite a sharp increase to supplies, the global demand for silver is far outpacing global production.

In fact global silver production has been unable to meet global demand for more than fifteen years.

The world's silver mines are simply not producing enough silver to meet demand.

In 2010, global silver demand exceed 1.05 billion ounces; but as you saw in the chart above, global mining has only provided about 700 million ounces.

So how has the market been filling this deficit?

Over the last two generations, major government stockpiles of silver have been sold off to supply the industry. The United States government alone has dumped nearly 5 billion ounces of silver into the market since WWII.

Of course, any government's well of silver reserves are finite. And over the past few years, government supplies of silver have been drying up. Data from the Silver Institute shows net government sales of silver falling drastically in the past decade.

This is one of the major reasons it is critical to act now.

Without government stockpiles to feed it, the market only has few other places to buy its silver.

Scrap metal is one option for the market, and will continue to help supply rising demand in the near term. But this well will also quickly run dry — and that will create a real problem for consumers who need silver...

Silver is Actually Rarer than Gold

Silver is 17.5 times more abundant in the Earth's crust than gold. But the amount of above-ground gold available far exceeds that of silver.

In 1950, there were 10 billion ounces of available silver above ground. By 1980, that number shrank to 3.5 billion. And today, no significant government stockpiles of silver exist anywhere in the world.

The USGS actually lists the U.S. government's current stockpile of silver simply as: “None.” 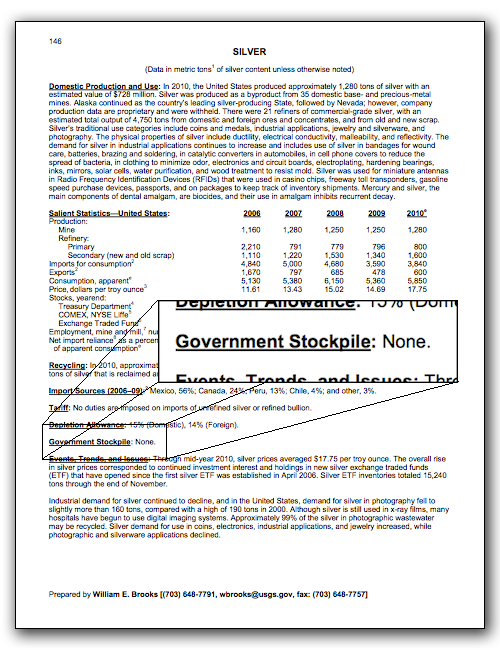 The exact opposite is true of gold.

The world currently produces about 700 million ounces of silver per year. Where does it all go?

Believe it or not, most of it winds up as garbage. We literally throw billions of dollars' worth of silver in trash bins every year.

Once any of these items has served its purpose, it generally gets tossed. And it's simply more expensive to recycle the silver from these products than it is to dig more out of the ground.

Tiny bits of silver in electronics are thrown away every day.

I expect that the world's dumps will be a precious source of resources like silver in the future.

The difference between the metals is that gold is produced, but it's not consumed. While gold is a highly-desired item, it's not an industrial commodity. In other words, gold is desired, but silver is needed.

All of the gold that has ever been mined is basically still around. Studies suggest 98% of all gold mined throughout history is still available in the form of coins, bars, artifacts, and jewelry. But silver is different.

From 1990 to 2000 alone, over two billion ounces of silver disappeared from the market to consumption.

Despite the lack of global stockpiles, new technology will continue to discover more industrial applications for silver, putting a further strain on world supplies. Consider the new photovoltaic industry as an example...

Silver Demand from the Photovoltaic Industry 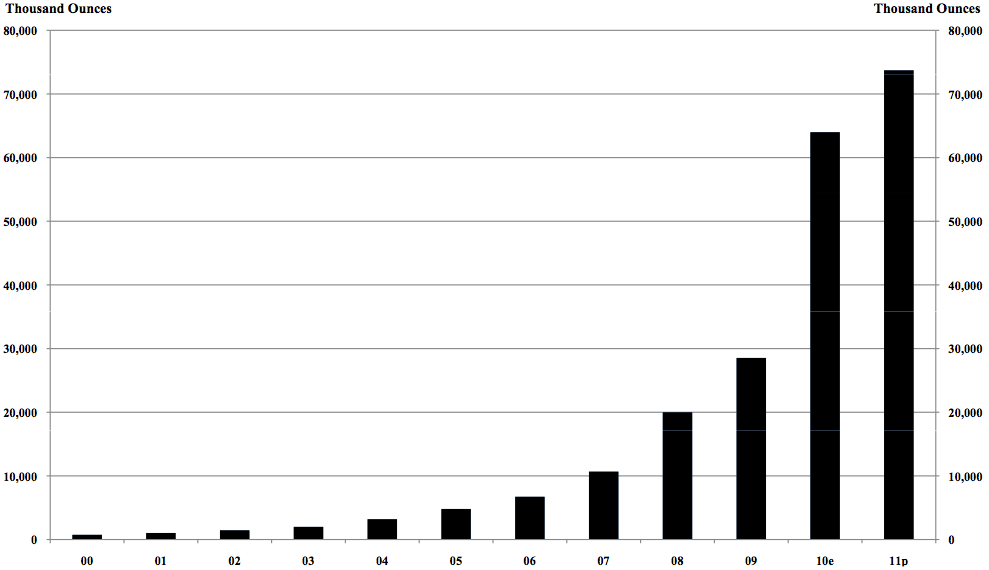 But to widen the supply deficit even more, the Silver Institute forecasts industrial uses of silver will rise sharply over the next five years. The organization estimates that by 2015, the demand for silver from industry will increase 36%.

The UK's Royal Mint, which makes the Britannia silver bullion coins and other collector silver coins, reported silver coin production in the first half of this year has doubled.

In the meantime, American Eagle Silver bullion coins continue to move at a record-setting sales pace. The latest sales figures indicate the U.S. Mint sold over total of 3.4 million Silver Eagles in June. This figure earned the title as the "Best Ever June," and ranked seventh place in all-time monthly sales.

This is all very much in line with reports from other mints around the world that are seeing a surge in silver coin sales over the same period.

There's no doubt the silver market will have to face a serious deficit. And in order to balance the deficit, silver will have to come from somewhere...

I believe the majority of this silver will come from investors. And for investors to sell, we'll need to see higher prices.

The world has been drawing down its above-ground supply of silver for decades, diminishing the only source of what is available for investment. Only now have we begun to collectively recognize silver as a solid investment.

This is the perfect market for silver prices to appreciate.

Global supply deficits continue to be ignored year after year by investors. This is slowly changing, but owning silver has not gone mainstream yet...

Even as premiums rise and available retail supply dwindles, there is still time. The opportunity in silver is huge.

I maintain that the very best form of silver you can own is physical — and in your personal possession.