We are living through a seismic shift in social and legal attitudes toward... just about everything, from gender and sexuality to mental and physical health care to race and class.

Many of the things I just listed are contentious and largely partisan topics. But there’s one particular sea change that Americans on both sides of the aisle seem to accept: drug reform.

Ten years ago, if you had told me that there would soon be multinational, publicly traded marijuana companies worth tens of billions of dollars, I would have laughed in your face. Most people would have. But today we know, in hindsight, that legal marijuana was one of the most important investment trends of this decade.

Now it’s time to look ahead to the next major investment trend to come out of the drug reform movement: psychedelic medicine.

What Is Psychedelic Medicine?

It might sound ridiculous to some, but researchers have been looking into psychiatric uses of hallucinogenic drugs — especially psilocybin mushrooms (a.k.a. “magic mushrooms” or “shrooms”) — since the 1950s.

In fact, a recent meta-analysis of mid-20th century studies published in the U.S. National Library of Medicine found that psilocybin-assisted talk therapy was an effective treatment for addictions such as alcohol and tobacco dependence.

It has also shown promise in the treatment of anxiety in patients with life-threatening illnesses like cancer.

Psychedelic medical research entered a decline in the late 1960s, as psychedelic drugs like psilocybin became stigmatized due to their association with the counterculture movement.

It had all but stopped by the mid-1970s, by which time governments around the world had started to criminalize these substances.

But today, psychedelic medicine is coming back. In legal marijuana states like Colorado and California, some cities, including Denver and Oakland, have decriminalized psilocybin. The state of Oregon may legalize it next year through a ballot initiative. And investors around the world are starting to take notice of the so-called “Shroom Boom.”

A privately held German company called ATAI Life Sciences recently made U.S. headlines when it raised more than $40 million in new financing, valuing itself at $240 million. It’s looking into an initial public offering (IPO) in late 2019 or early 2020.

The company funds clinical trials for psilocybin and other “formerly stigmatized compounds.” It’s the largest investor in a London-based startup called Compass Pathways, which is seeking to become the Western world’s first legal psilocybin company.

ATAI is perhaps the most publicized psychedelic medicine company, but it’s not the only one. Believe it or not, there are already publicly traded firms that can give investors exposure to the growing psilocybin industry.

How to Invest in the Shroom Boom

Before we start dropping ticker symbols, we should caution that the Shroom Boom is still in its early days, and most (if not all) "shroom stocks" are very risky over-the-counter (OTC) penny stocks.

Many of the public companies in the psilocybin industry are based outside the U.S., and they may stay that way for some time.

That’s because shroom stocks face a similar logistical issue to pot stocks: Since their core business is technically illegal under U.S. law, they have limited access to banking and other financial services.

Having said all that, let’s take a look at the first three shroom stocks you can buy today:

Are these stocks a buy right now? It’s hard to say. They’re all really small-cap stocks with low liquidity, operating in what currently remains a fringe industry. In terms of price action, they’ve been all over the place in the last year. 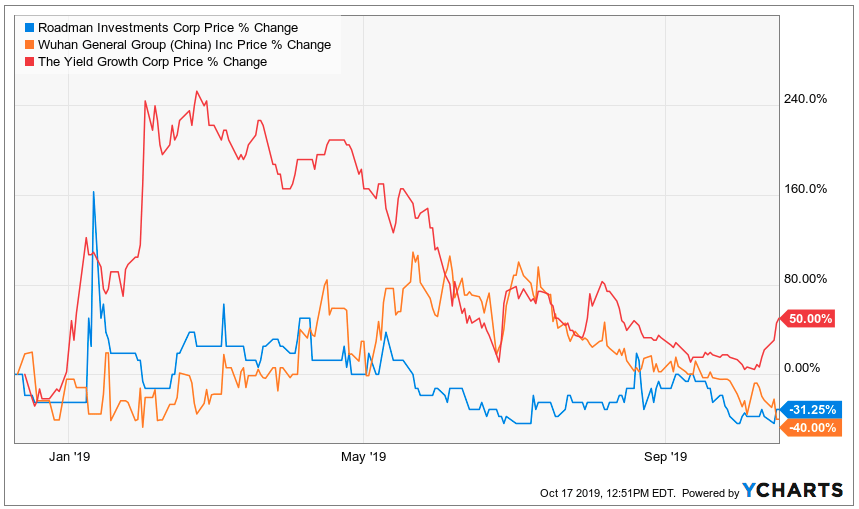 It’s also worth noting that the two Canadian-listed companies haven’t actually started manufacturing psilocybin yet; they’re presumably waiting for a regulatory shift toward psilocybin legalization before they do so. And Wuhan could be impacted by the U.S.-China trade war.

But if you have a few dollars to gamble on an emerging, gray-market industry, why not pick up some shares of these three companies? For all we know, they could one day become the Canopy Growth Corp., Tilray, or Aphria of the Shroom Boom.

If you’re looking for a less-speculative set of penny stocks that are benefitting from the momentum of the drug reform movement, check out one of the latest reports from Angel Investment Research analyst Alex Koyfman.

He’s been keeping tabs on a small cannabis company that is well insulated from its competitors — and from the effects of the bursting pot stock bubble. Read more here.