Sell, Sell, Sell! This stock is going to ZERO

“You love to tell people that you were right.”

Those were the exact words spoken by my girlfriend in a conversation we had earlier this week. I won’t bore you with the details about how that one came about, but I will say this: She’s definitely not wrong.

I’m stubborn as a mule, and when people don’t listen to my advice, I usually take the first opportunity to say “I told you so” down the line. I know, I know: That probably makes me look like a jerk sometimes, but I promise this habit of mine stems from an earnest desire to help people.

After all, I’m not giving anyone my advice just for the hell of it. I’m giving it to them because I want to encourage good decisions.

I bring this all up to you today not because I need a venting session, but rather because I’m about to say, “I told you so,” and I want to make sure you know I’m doing so out of benevolence.

So with that disclaimer out of the way, we’re going to revisit a topic I’ve been sporadically talking about for the last three years: the inevitable demise of video game retailer GameStop (NYSE: GME).

Here’s the crux of what I said in various updates dating back to 2016:

Video game storage is going through yet another transition — the shift from physical disc storage to digital storage — and it stands to reason that this evolution is all but imminent.

For one, digital downloads make it easier for consumers to purchase and obtain the content they want straight from the comfort of their couch. Between increased Internet speeds and console storage capabilities, recent advances have made digital downloads more convenient for gamers than ever before.

Digital downloads are jointly a major benefit to video game publishers looking to maximize sales. By keeping video games in digital form, publishers can cut down on the reselling of used games between gamers, because there is no physical product to transfer.

This inevitable shift from physical to digital puts an incredibly dark cloud over the GameStop franchise. The company has 6,627 physical locations worldwide and relies on used video games for 24.9% of its net sales. Pivoting to a digital model would be near impossible for the company.

Should the video game industry fully adopt the digital storage trend, GameStop would be in for an incredibly rough ride, reminiscent of what Blockbuster went through when movie and television consumption began to shift to digital format thanks to competitors such as Netflix.

In the long run... you can be confident shares of GameStop will continue to plummet from their 2015 peak, and that's ultimately what matters. The company is eventually going to zero, and it's just a matter of time. Anyone who owns it should sell. Anyone who knows how to short should develop a position.

Love to Say I Told You So

Lo and behold, earlier this week, GameStop Corp. announced crushing news for its investors. The retailer would be abandoning efforts to sell the company to prospective suitors, with the official statement reading:

GameStop’s Board has now terminated efforts to pursue a sale of the company due to the lack of available financing on terms that would be commercially acceptable to a prospective acquirer.

Shares fell over 27% on the day (Tuesday), with no recovery on Wednesday, Thursday, or Friday.

The long and short of it is that GameStop is now entirely on its own. No one out there wants to buy the company, and for good reason.

Here’s the firm’s net income over the last three years: 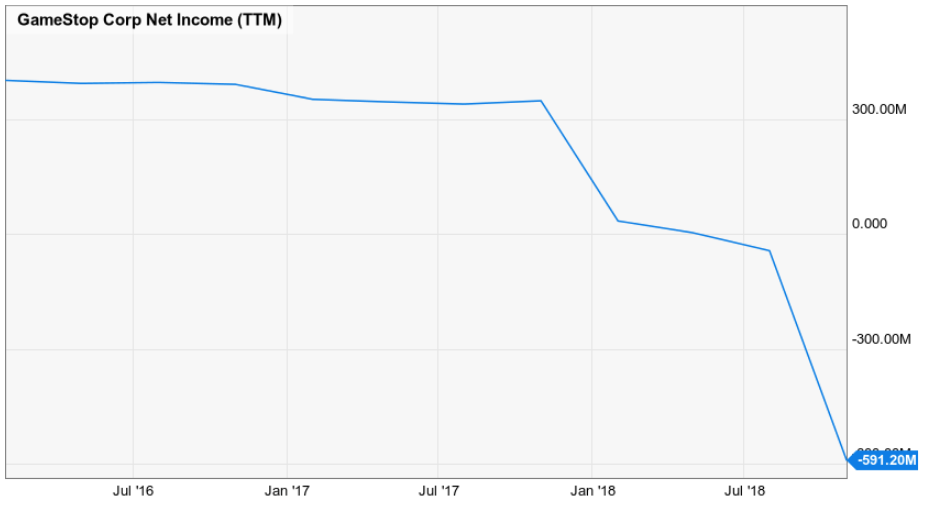 Its cash flow from operations in the same time frame: 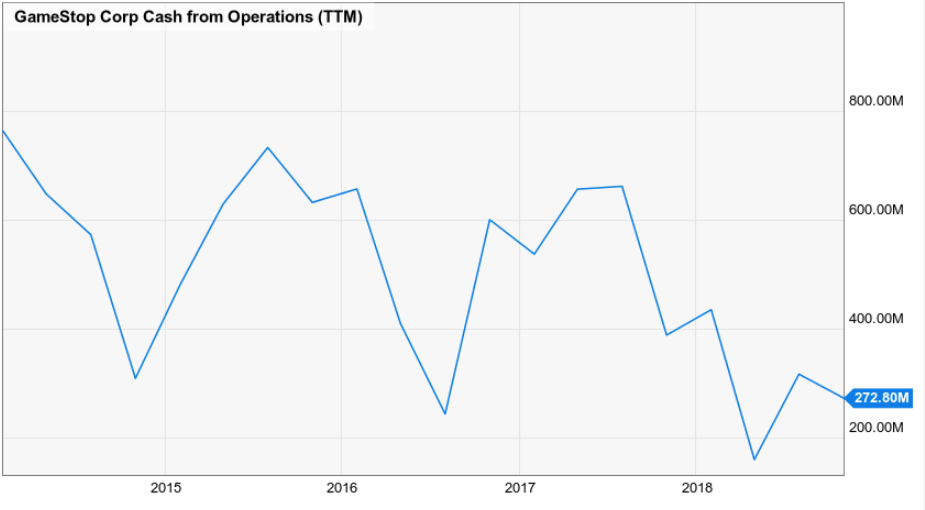 And its long-term debt: 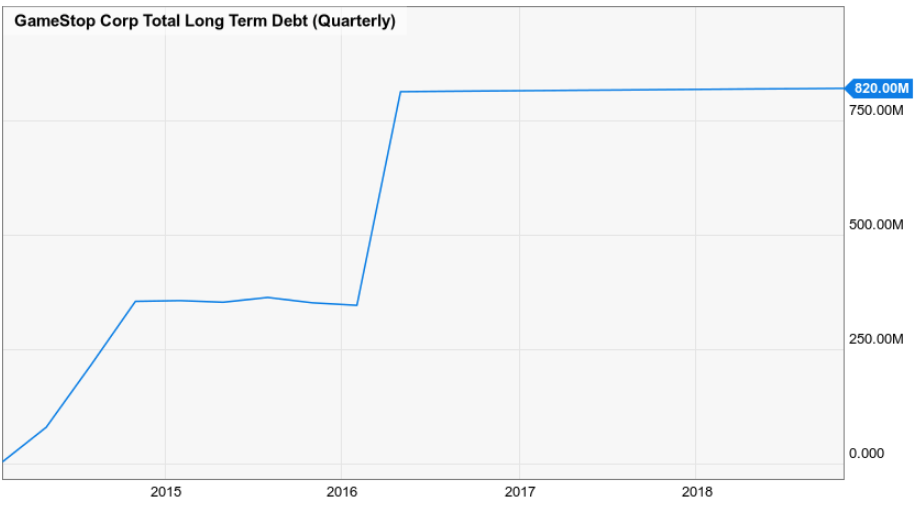 In the same period, GameStop’s revenue is down by a hair, as are its cash reserves, now at $454 million.

Assets have ticked up about $500 million during that time frame, but those gains have easily been offset by a liabilities increase of $2.2 billion.

Put bluntly, there is no direction for this company but down. Physical retail for gaming is dead, and it’s as simple as that.

The Future Is Digital

Later this year, Microsoft plans to release the newest version of its Xbox One console. The console will not accept physical discs or cartridges, a development that is absolutely devastating to GameStop’s chances of treading water much longer.

Microsoft (NASDAQ: MSFT) will also be introducing a disk-to-digital program that will allow users to turn in their physical games for permanent digital copies. What role does GameStop play in this future of gaming? Most likely none.

GameStop recently attributed its sales decline to these kinds of subscription services, as there is no reason to buy games from a store when you can just stream them from home.

To top it all off, the world’s most popular games in recent years have been almost entirely digital. Gamers have flocked to titles like Fortnite, Minecraft, League of Legends, and Player Unknown’s Battlegrounds, which, aside from physical copies as collector’s items, are all downloaded, not purchased at a retail store.

Sure, GameStop will be able to sell some knickknacks and plush toys to milk these kinds of popular games, but the core of its business is quickly disintegrating as gaming makes its way to the cloud.

GameStop continues to entice investors with a deceptively appealing 13.6% dividend yield, but that’s obviously a trap.

Sell GameStop if you own it. Short it if you can cover the margin requirements and want to double your money in due time.