Nouriel Roubini has a well-earned reputation for predicting economic downfalls. Long before most others, the man known as “Dr. Doom” called out the domestic housing market for perpetuating an unsustainable bubble. 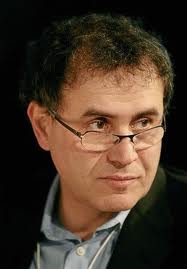 This was in 2005, and we know what happened a few years later. Lately, he’s been predicting that gold could hit $1,000. What gives?

Index Universe has some excerpts from a recent interview Roubini did with ETF Report. Roubini points out systemic slowdowns that are plaguing both China and the Eurozone. This widespread pressure on the economic system essentially means global growth and commodity prices are going to take a hit.

On the other hand, the shale revolution in North America and promising offshore discoveries elsewhere in the world all make for a rise in oil supply. Yet demand is slowing down—again, thanks largely to slowdowns in the Eastern world. And of course, governments around the world continue to push for renewables incentives.

What we could see, in effect, is excess oil. As far as gold is concerned, though, Roubini believes the yellow metal hasn’t yet hit its bottom; it’s going to keep declining until it hits $1,000—probably by 2015. And Roubini has several reasons for believing this.

First of all, international “tail risks” are significantly lower today. Second, despite the various quantitative easing (and similar) actions undertaken by banks around the world, inflation will continue in the low digits simply because growth itself is weak. Inflation, in fact, is decreasing both in established and developing economies.

What does that mean for gold? Well, if inflation is going down, then people don’t exactly need a hedge against it, do they? It just means investors won’t be that interested in buying gold because it isn’t a good investment anymore.

On the other hand, there are signs of an economic recovery not just within the U.S. but also, tentatively, in other nations. That means indexes for everything from equities to the housing market are on the upswing, and gold isn’t the only thing investors want to bet on. Remember, gold has traditionally been a hedge against the other economic indicators. In short, when all else seems risky, buy gold. That isn’t the case now.

Moreover, real interest rates are going to rise. That’s inevitable; the Fed’s been holding these rates down to spur growth, so from here rates can only go upward. Given the close correlation between those rates and gold, it means bad things for gold.

And finally, given the weakened established economies and the relatively “soft” developing ones, it’s likely the dollar will appreciate—meaning gold isn’t that attractive.

In general, though, Roubini does see growth gaining over the second half of this year and possibly picking up further momentum over 2014. The Fed’s “tapering-off” could begin late this year and continue through next summer.

Of course, we should remember that Bernanke has promised a highly accommodating policy as far as the tapering is concerned, so all of that is really very speculative. Nonetheless, Roubini’s figures are more conservative than most; whereas many other economists have projected 3 percent growth over 2014, Roubini sees just 2.4 percent. Year-over-year GDP growth for the present year he sees at around 1.8 percent.

With all that said, it’s clear that a lot depends on what the Federal Reserve chooses as a course of action. Yesterday, for example, the Fed decided to sustain its asset-buying stimulus program as usual, countering expectations. The Fed pointed to the recent slowing of economic growth as a key reason for its choice; the move ended up resurrecting concerns over whether the fabled tapering-off will actually occur later this year or not.

USA Today reports that in its announcement, the Fed stated that the June economy proceeded “at a moderate pace” against the “modest pace” set in the first half of this year, and that the persistently low inflation (it’s just over 1 percent as of now) continues to be a concern (read: deflation or possible recession). That’s why the Fed decided to keep its stimulus going, hoping to push rates up to the target of 2 percent.

All this indicates is that it’s not yet time to go one way or the other as far as gold is concerned; watch out for more upheavals to come.