Right now, the world is going through a massive economic re-balancing. The old idea that China will sell us stuff — while lending us the money to buy it — is unwinding.

In fact Ben Bernanke has declared a currency war on China's undervalued RMB. Good ol' Ben says we can make the dollar cheaper than the Chinese yuan, and he aims to prove it.

The Fed recently proclaimed its desire to create and buy $600 billion in U.S. Bonds. "The FOMC intends to buy an additional $600 billion of longer-term Treasury securities by mid-2011 and will continue to reinvest repayments of principal on its holdings of securities, as it has been doing since August," said Bernanke.

Ben is taking this approach because it works right up until it doesn't.

It worked after the past five bubbles popped, and it looks to be working this time.

When Ben floated the idea of a $600 billion cash infusion, stock prices rose and long-term interest rates fell in anticipation.

I know some of you will point out that the RMB is pegged to the dollar, and therefore the dollar can't fall... But it does cause an inflation problem in China, which is a de facto re-balance.

According to Bloomberg, “Over the past five years the real-estate prices have tripled. And as property makes up a third of living costs on average, this alone means the real yuan value has doubled.”

Chinese Commerce Minister Chen Deming said as much in an interview on October 26th: "Uncontrolled" issuance of dollars is "bringing China the shock of imported inflation."

There are some downsides to printing more dollars.

China has been holding down its currency for years. It now has the world's second largest economy; but in terms of per capita income, it ranks at 102 — right behind Turkmenistan, Algeria, and El Salvador. Clearly, an artificially low currency isn't a path to prosperity...

But it does lead to a boom in all asset classes. There used to be an inverse ratio of commodities to equities. When one went up, the other went down.

In the mid-2000s, when Federal interest rates fell, stocks went up, gold went up, housing went up, oil, uranium, copper — everything went up... This was a direct result of easy money.

Now, due to 0.25% Fed interest rates and $600 billion in QEII, almost every asset will continue to go up — with the exception of your salary and your returns on your bank account.

And to top it off, the U.S. isn't alone. The rest of the world from Europe to Brazil is increasing the global money supply.

The question isn't whether low quality growth can work, because it does. Easy money and debt have funded the past twenty-five years of U.S. growth.

The question is, How do you keep up with it?

The tunnel of doom

When I was a kid riding in the back of our 1976 Ford LTD wagon, we would on occasion drive through a tunnel.

As a child, I would envision the tunnel's ceiling cracking just as we passed the lowest point. The Chesapeake would flood in behind us as Dad raced towards the circle of light and the safety of the surface.

This is how you must treat your portfolio. If you stand still, you're dead.

Those people who bet on stocks and got burnt then turned to housing and got burnt. They are now sitting with their cash in the bank. They are tired of risk and have given up on trying to beat the system.

Unfortunately for them, they will lose again. The best defense is a good offense, and to the victors get the spoils.

For the past six months, the hot money has been going to places like India... 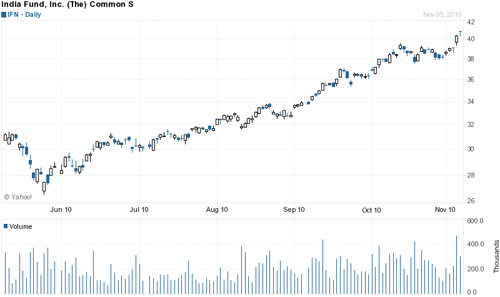 But as my dear, sweet grandma used to say, “Buy low, sell high.”

There is a lot of resistance on the India Fund at $40, so I'll wait for a better entry price on that one. 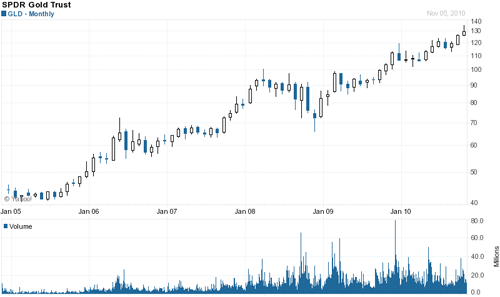 Gold, on the other hand, is hitting all-time highs. No resistance, and smooth sailing as far as the eye can see.

If you don't own some gold mining stocks, be sure to buy some today.

There is another commodity that hasn't yet joined in the commodity boom: oil.

Oil has been building a base for almost a year.

The price of light crude is pushing at the highs, and has been putting in a series of higher lows and higher highs. If we can break through $92 a barrel, we are off to the races.

And when the next business cycle gets going... these stocks will fly.