Maybe it's a trial balloon. This could be one of those times when a corporate executive announces a sweeping policy change that can later be modified or even squashed if the reaction to said policy change is undesirable.

Personally, I don't think so...

Porsche's North American CEO told a Bloomberg columnist that half of the company's cars will be electric — in five years. 2025 is the year. Really not that far off...

Now, CEO Klaus Zellmer admits that this is a prediction and not a promise. Still, change is coming fast, and the ramifications are huge for the oil sector.

It's not that Porsche going electric will have a noticeable effect on oil demand. Porsche only sells 250,000 cars a year...

But Volkswagen sells 10 million cars a year. And it says it will have 50 fully electric models in 2025. Ambitious for sure.

GM (7.8 million cars a year) says it will have 10 electric models next year. Also ambitious.

Toyota's (10.2 million cars) and Hyundai's (7.8 million cars) plans sound a little vague, so I'm just going to ignore them. It's pretty easy to see why specific plans are vague...

Current battery technology isn't ready for prime time. And neither is the charging process. Range has to get better than 250 miles. And waiting 30 minutes for a charge is likewise impractical. Porsche has a bit of an advantage there because its buyers typically own three cars, so the electric Porsche wouldn't be the primary vehicle.

Roughly 6 million electric cars have been sold worldwide. That's cumulative, not annual. And if you look back at the numbers for internal combustion car sales from the four biggest I listed a minute ago, electric car sales are a drop in the bucket.

But here's the thing: That relatively small number of electric cars on the road, combined with higher gas mileage standards, has dramatically impacted global oil demand...

The Saudis Are Selling

Global demand for oil is still growing. But the rate of growth has slowed to about 1 million barrels a day... 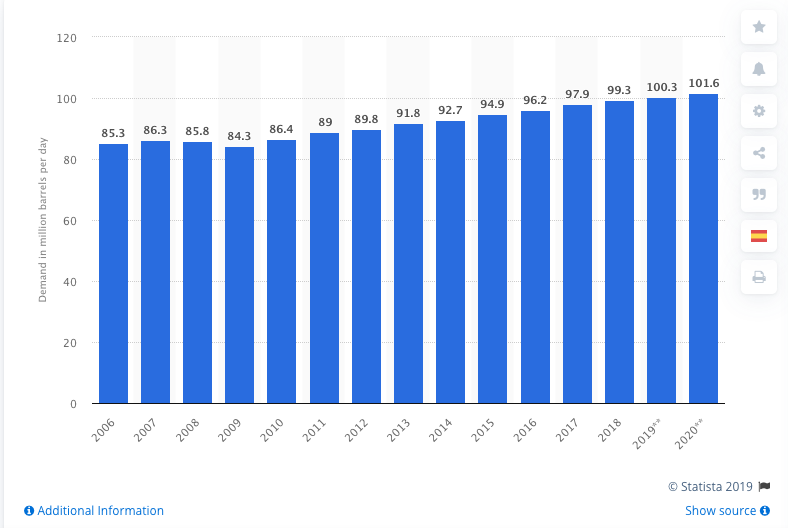 Now, I know I talk about this a lot. But it's huge. Even though I seriously doubt that investors will give Aramco the $1.7 trillion valuation the Saudis want, it seems reasonable that it will still be the biggest company in the world...

What's more, it's a company that does not have much growth ahead of it. It's not exactly like buying Sears in 1998, right before Amazon and the internet really took off. But I don't think that analogy is that far off base, either.

Of course, life's messy. There really aren't that many straight lines in the world. So we can be pretty sure that the path to electric vehicle-dom will be a twisted one. In fact, we're seeing a pretty good twist right now.

China's economy is kind of a disaster. The Commies are reining in electric vehicle subsidies, and demand has been slowing for over a year. Chinese electric vehicle sales fell 4.7% in July, 15.8% in August, and a huge 34% in September.

This makes investing in the future of electric cars kind of tough. But I can tell you: This is how China operates. We've seen it in the housing market, with banks and infrastructure. The government starts throwing money around to push its agenda, and when things start getting a little too hot, they rein it in, and the economy slows for a little while. Then, after a while, they start throwing money around and things pick up.

Trade talks with the U.S. have absolutely gotten in the way, and China has certainly been willing to let its economy drag, too. Still, there's a limit to how far and how long they will let it go.

I don't know if there's blood in the streets of electric vehicle-land just yet. But I do think it's about time to start looking at some stocks in the sector.

I think you have to assume that electric cars are disruptive. For one, I think they're going to destroy value for the carmakers. It's estimated that it won't be long before an electric engine is good for a million miles. A million...

That's crazy, and it suggests that the buying cycle for electric cars is gonna get reeaaaalllly long. Maybe the carmakers can command better margins? They sure aren't gonna sell more cars.

It has also been nigh impossible to invest in solar. Well, I mean, it's easy to buy solar stocks. It's the making money part that is nigh impossible.

And it's (hopefully) obvious that I'm not a big fan of oil and Aramco...

So I think it's the lithium miners — the critical element for the batteries. Near as I can tell, when scientists do finally achieve a breakthrough that allows the batteries to store more energy and charge faster, they will still be lithium-ion batteries.

The biggest lithium miner is Albemarle (NYSE: ALB). It's got a trailing P/E of 12 and a forward P/E of 13. Yeah, earnings are going the wrong way...

That's why the stock has been cut in half over the last year. Currently at $65, it's not that far from the $50 level, where it was in 2016 before the lithium mania. I kind of doubt it gets back to $50, unless something really dramatic happens.

I don't think you need to run right out and buy this stock. But keep an eye on it. If you see $60, that's a pretty good spot.

It's All About Context
When corporations cut back on spending, that's a good time to start paying attention. Right now, companies say they are cutting spending due to uncertainty surrounding the trade discussions with China. Wealth Daily editor Briton Ryle discusses the two possible outcomes...
Art and Science in Investing
Wealth Daily editor Briton Ryle argues that investing is part art and part science. There are a lot of ways you can invest by the numbers and do very well. But how do you know when it's a good time to buy a stock and when it might be time to wait?
Art and Science in Investing: Part II
On Monday, Wealth Daily editor talked a bit about investing "by the numbers," or the "science" of investing. Today he's discussing the "art" side: how to choose from the many stocks available.
The Truth About the Aramco IPO
JP Morgan wants you to think oil is a great place to invest right now. But here's the thing: JP Morgan is also leading the public offering for shares of Aramco. Wealth Daily editor Briton Ryle warns investors not to fall into the trap.
Don't Buy This IPO
The most dangerous time for individual investors is when an investment bank first gets its teeth into a stock. That's because the stock likely has some momentum going. And it's also when investors don't understand the full story.
Buffett's Envy: 50% Annual Returns, Guaranteed
Warren Buffett once told investors at an annual shareholder meeting, "...it's a huge structural advantage not to have a lot of money. I think I could make you 50% a year on $1 million. No, I know I could. I guarantee that."