Peak Gold is a Myth

Peak Gold is Bunk, But Perception is Everything

Since the mid-1950s, researchers have been concerned that peak oil will send petroleum prices spiraling out of control.

Today, a growing faction of gold bugs has recently been discussing their own "peak" theory for the future:

They believe the world's total production of gold may have already peaked. And now gold production will fall drastically, helping push gold prices over the inflation-adjusted high of $2,500 an ounce.

Some are even making predictions of over $5,000/oz.

And I think they may be right — but for the wrong reason.

According to their models, peak oil theorists maintain the total rate of world oil production will grow exponentially over time until reaching a pinnacle, and then fall into a terminal decline. That pinnacle is peak oil.

The resulting timeline of global petroleum output would follow a basic bell curve shape. Something like this... 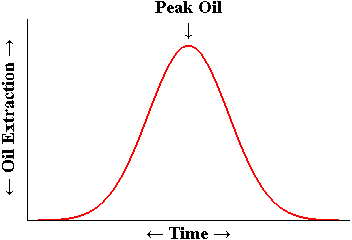 The concept of a peak in world oil extraction is based on production rates over the lifetime of individual oil wells, fields, regions, and countries. A prime example is the production life of the Cantarell Oil Complex.

Located just 50 miles offshore, Cantarell is the largest oil field in Mexico and was once one of the top five largest producing petroleum fields in the world.

Cantarell more than doubled oil output between 1995 and 2005, topping out at 2.1 million barrels per day. But in the four years that have followed, oil production from Cantarell has plunged almost 75%. A 15-year chart of petroleum extraction from Cantarell mimics the classic model of peak oil theory. Take a look... 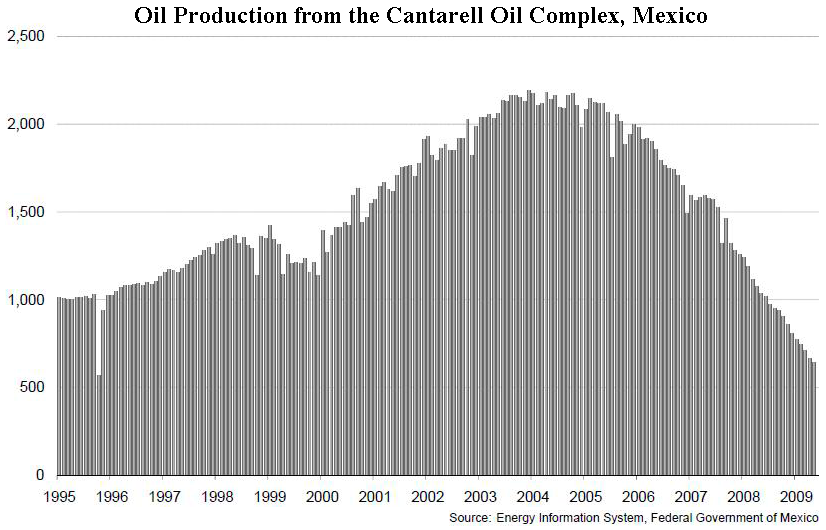 Production rates at other major oil fields around the world are starting to look similar. In fact, as many as 6 out of the world's top 10 largest oil fields may have already peaked like Cantarell.

The exact date when oil will peak is debated. Experts estimate the date of the global production peak to range between the years 1990 and 2020 — after which oil becomes less available and more expensive.

So it's suiting that speculators are tailoring their portfolios to take advantage of a rapid increase in prices. My colleague Ian Cooper is one such speculator, and he knows commodities can translate into big dollars in this market...

Other investors have noticed a recent decline is gold mine production and have applied ideas from peak oil theory to create a new paradigm for the future, aptly called "peak gold."

What is Peak Gold?

Peak gold is basically the gold mining equivalent of the peak oil theory, as I explained it above.

Proponents of peak gold point to the fact that global gold production reached an all-time high of about 83 million ounces per year in 2000 and has since fallen to about 72 million ounces. This accounts for a 13% decline in 9 years.

But there are a few important factors to consider when comparing peak oil to peak gold.

First (and maybe most important), is that oil is a perishable commodity. Its energy can only be used once.

Gold, on the other hand, is virtually indestructible. And its use as a store of value is everlasting.

Gold can be recycled and reused. And unlike barrels of oil, every ounce of gold that has ever been mined is still around.

Therefore, the demand for gold will forever be able to be met.

Moreover, gold production has been gradually rising and falling for over 6,000 years.

During the 20th century, there were three decade-long periods when world gold production fell by an average of 30%. Nevertheless, global gold production reached another record high in by the end of the century. Take a look... 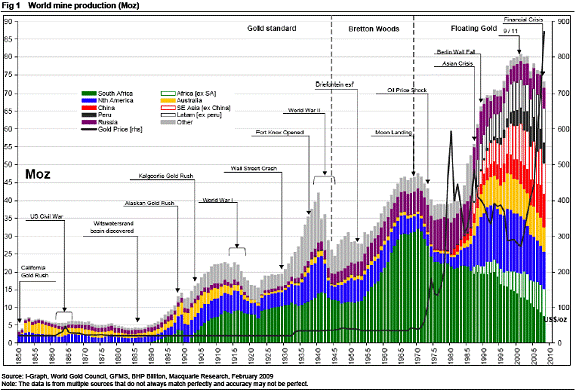 I believe the real reason for the drop in world gold production since 2000 was the commodity bear market of the 1980s and 1990s.

During this period, companies lacked the financial incentive to explore for gold, resulting in limited capital for exploration and development of new mines that would go on to produce gold today.

There is simply less evidence to support the case for peak gold right now. And I don't think it should have any serious impact on the gold market in the near-term.

However, perception is everything...

And if a broad enough audience of investors begins to believe that the world's capacity to produce gold really has peaked, speculative mania buying could rapidly drive up gold prices well past their inflation-adjusted highs.

I remain, of course, bullish on gold over the long-term due to rising investment demand. Members of my Hard Money Millionaire have already had the opportunity to make almost 60% in three physical gold investments listed in our portfolio. (You can take a look at my portfolio here.) But I expect even bigger gains over the next several months, as gold continues to surpass record prices.

In the meantime, we just need to hang on for the ride.