Over the Edge in a Fiscal Cliff Free Fall

Now that the election is behind us, we have a bit more clarity in terms of how the economy will act for the next couple months.

With functionally the same president, Senate, and Congress in control, we're finally able to piece together an idea of where the market will go into 2013...

Unfortunately, where it's going isn't a happy place.

Take a look at the reaction to the election news...

You can see how the market reacted to the news through the Dow Jones Industrial Average:

With all the talk of economic and tax policy during the election, this reaction was far more simple.

The split between the Senate and Congress with a Democrat in the White House guarantees a veto-proof legislature.

That's where the drop comes in.

While we have a full month and a half before the year ends and we hit the fiscal cliff, there are only 14 scheduled days left for Congress...

It's easy to get used to a looming deadline for politicians. But once again, the fate of the entire national and global economy is at stake.

Now the same government that's driven brinkmanship to a new level is in place — and we're stuck looking at the abysmal track record of the last four years.

To illustrate the issue, a theory that the Democrats will allow the nation to go over the fiscal cliff is gaining ground in the mainstream media as a real possibility...

The most extreme scenario was a Congressional act to remove the teeth from the fiscal cliff.

Now it's to go barreling through it.

The rationale: It will make the economy bad enough to force concessions.

It will also allow Republicans, many of whom signed Grover Norquist's pledge to avoid tax hikes, to say they didn't vote for a tax hike because many popular policies from the last decade will have already expired.

If that sounds too ridiculous to possibly exist outside of fringe media and pundits, check out this article from NPR, along with this piece by Paul Krugman for the New York Times.

The only reason this potentially disastrous scenario is even on the table is the brinkmanship and leverage our country has maintained.

With the same gridlocked government, we can refer to its track record as a working model for how the fiscal cliff crisis will be handled; we can look back to the debt ceiling crisis to get an idea of how politicians will act and how the market will react.

On the political end, the debt ceiling crisis functionally began in January 2011 when Treasury Secretary Geitner sent a letter to Congress urging them to deal with the issue as soon as possible...

The bipartisan “Gang of Six” meeting began as well.

By May 16 of the same year, several measures had been rejected by the Democrat-controlled Senate, and the Treasury Dept. started using accounting tricks to avoid a spending freeze...

By July, a grand bargain between President Obama and Rep. Boehner completely failed. A flurry of failed proposals followed.

Only after intense political weight was a deal signed by all parties on August 2.

Here's how things looked through the Dow (to give you some perspective, on July 12, 2011, there were 14 days with Congress in session before the deal was finalized):

Needless to say, if the market shows similar behavior, we're in for a pretty steep decline over the next several weeks.

There are a couple ways to make sure your portfolio is protected from what's becoming an increasingly likely drop in the market...

As I've talked about before, you can use stop losses to stay in the market and automatically have positions sold if the market tanks. You just have to watch for a bottom and buy in for some potentially massive gains.

Another option is to move into hedge positions, such as gold.

Check out the massive pop in gold prices on November 6, Election Day: 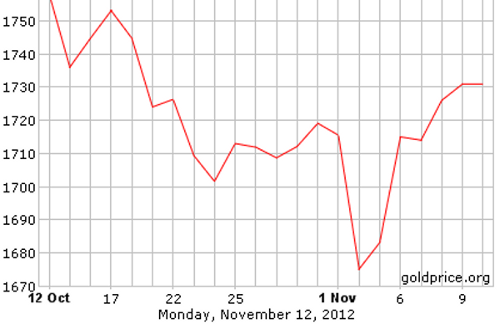 If you've waited until now to get a position in gold, you're a bit behind the curve.

But it isn't too late.

In reality, a mix of positions is probably ideal. You can maintain both a position in pure gold as a hedge against the dollar and economy while investing in equities that should do well during a downturn.

Investing in gold mining companies has become extremely advantageous in recent months after a lull in gains earlier this year...

Christian DeHaemer has been planning a move into junior miners while maintaining bullish sentiment for bullion for months now. You can find more information about the opportunities he has found for his readers here.

P.S. While only a month and a half remains until we go over the cliff, and 14 days with Congress in session, it isn't too late to take advantage of Chris DeHaemer's due diligence on these three gold plays today. But I wouldn't put it off much longer... because in as soon as three months' time, gold is projected to double in value.