Plus Good News From Iraq 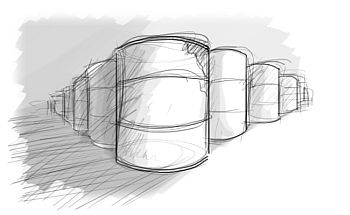 About ten years ago then President Bush told us with a straight face that Iraq would produce 16 million barrels of oil a day and proceeds from sales would pay for the war.

Ten years, and a trillion dollars later, we learn yet again that politicians are liars. So it goes.

But there is some good news from Iraq. The country is poised to have the world's largest surge in oil exports. Southern exports jumped to 2.11 mbpd so far in April. That's a 190,000-barrel-a-day increase.

Iraq is expected to provide the world's largest expansion in oil export capacity in 2012 as new outlets open. Its supply to the world market had been held back for years by a lack of port capacity after decades of war and sanctions.

Oil began loading from a new floating single-point mooring (SPM) platform in the Gulf - the first of several - on March 8. So far in April, the facility has exported four 2 million-barrel shipments, more than in all of March.

The extra port capacity is allowing Iraq to sell more of its increasing oil output.

But now they can export as much as 2.5 million bpd – the highest amount since before the U.S. invasion, though still well below the all-time high of 12.5 million bpd. The new goal is 13 million bpd by 2017.

That goal seems reachable and would represent a 420% increase in output in just five years.

BP is a major player in Iraq and has the service contract for the Rumaila field, Iraq's largest that has the potential to produce 3 million bpd on its own. BP is also working on the Kirkuk oil field in the north.

Iraq is the only country in the region with the ability to ramp up its oil production. Iraq has 115 billion barrels of proven reserves and as many as 200 million of estimated reserves. These have been mostly untouched for 20 years.

There are other smaller companies that will also benefit. We are playing two in Crisis & Opportunity. Expect the Iraq trend to continue.

In other oil news, things are getting interesting in Kenya.

I've written a great deal in the space about the U.S. Africa Command, and the special ops forces that Obama inserted into East Africa.

We wondered about the coordination of Obama-backer and media mogul Oprah Winfrey that sent a viral video about jungle fighter Joseph Kony to the top of Google search. It also lead the network news.

The search for Kony sets the moral high ground for military action in the region.

We also learned of major oil and natural gas strikes in the East African rift. Tullow Oil (LSE: TLW) hit oil in its first exploration well. It was the first strike in Kenya. The coverage was international and Kenya oil stocks doubled.

Now we get another piece of the puzzle.

Today U.S. Trade & Aid Monitor reported the U.S. is stepping up its action in the region.

Kenyan businesses lately are increasingly becoming recipients of U.S. government largesse, as the Obama Administration, among pursuing other endeavors, aims to expand "livestock-related economic opportunities" in that nation.

The U.S. Agency for International Development (USAID) is setting up a five year plan that will invest in livestock but will also include a $50 million investment in U.S. Navy construction projects at Camp Simba, Kenya and Camp Lemonnier, Djibouti.

There will also be a U.S. Trade and Development Agency-led search for a contractor to perform a “definitional mission” exploring possible funding of geothermal energy project.

I have no idea what “definitional mission” means, but I expect its bureaucratic for “government waste.”

To recount: we have oil, expanding regional military bases, moral justification and an increase in “hearts and minds” policies. I'll let you draw your own conclusions.