Two weeks and thirty-eight years ago, OPEC announced it would cut all exports to the United States and other nations that provided military aid to Israel in the Yom Kippur War.

Exports were to be reduced by 5 percent every month until Israel evacuated the territories occupied in the Arab-Israeli War of 1967.

That lasted until December 1973, when a full oil embargo was imposed against the United States and several other countries.

This threw the economy into chaos. 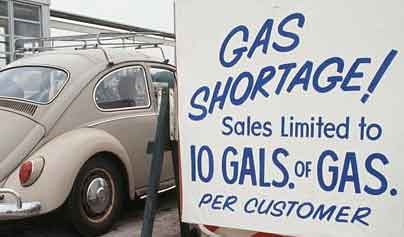 The root cause of the oil embargo was war.

In October 1973, Egypt and Syria launched a joint attack on Israel. After withstanding the initial attack, Israel began beating back the Arab gains with the help of a U.S. airlift of arms and other military assistance from the Netherlands and Denmark.

OPEC turned to oil as a political weapon against Israel and its allies. The goal was to force Israel to return to the 1967 borders.

Israel refused to give up its war gains, and the price of crude increased by 70 percent almost overnight. 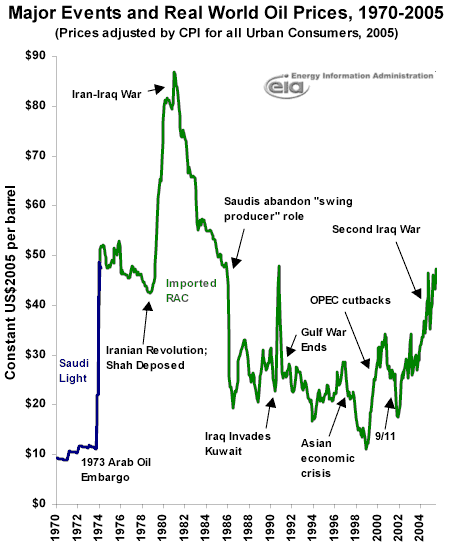 Oil prices jumped another 130 percent by December, when a total oil embargo was imposed on the United States, the Netherlands, and Denmark.

At the end of the day, the price of oil quadrupled, causing a major energy crisis in the United States and Europe that included price gouging, gas shortages, and rationing.

Since then, OPEC has lost leverage and the price per barrel has been up and down. This volatility has been driven by supply shocks caused by wars. There have been demand disruptions as well, due to economic crises, peace, and the 9/11 attacks.

This brings us to today's $94 a barrel price.

Crude prices are now moving up, signaling we are coming out of the global recession.

As you can see by the chart, oil prices have put in a double bottom and broken above resistance level:

The idea of a global expansion is backed by the unemployment data.

The government's number for people seeking unemployment insurance fell below the 400,000 barrier today. Earlier in the week, ADP's numbers beat expectations by 10% for private sector jobs.

Here at Wealth Daily, we have turned decidedly bullish. The private sector is flush with cash and starting to hire and expand.

In this environment, oil is undervalued.

It's even more so when you consider that just last week, Goldman Sachs recommended long oil positions in New York December 2012 oil contracts, citing the work-down of stockpiles in Cushing, Oklahoma. Stockpiles have fallen for the past four weeks.

Sure, Goldman talks its own book. But the oil industry is bullish as well...

Offshore rig utilization rates have been climbing since mid-July. And you don't pay half-a-million-a-day rental fees unless you are pretty certain.

With this backdrop, we have increasing tension in the Middle East.

Israel recently test-fired a rocket capable of hitting Iran with a nuclear bomb. Israeli Prime Minister Netanyahu said Israel considers Iran to be its greatest threat. It has been widely reported that he has tried to persuade his cabinet to authorize an attack on Iran's nuclear weapons program.

But it's not just Israel that is building war possibilities...

Things are heating up in the UK. From the Guardian:

Britain's armed forces are stepping up their contingency planning for potential military action against Iran amid mounting concern about Tehran's nuclear enrichment programme, the Guardian has learned.

The Ministry of Defence believes the US may decide to fast-forward plans for targeted missile strikes at some key Iranian facilities. British officials say that if Washington presses ahead it will seek, and receive, UK military help for any mission, despite some deep reservations within the coalition government.

In anticipation of a potential attack, British military planners are examining where best to deploy Royal Navy ships and submarines equipped with Tomahawk cruise missiles over the coming months as part of what would be an air and sea campaign.

They also believe the US would ask permission to launch attacks from Diego Garcia, the British Indian ocean territory, which the Americans have used previously for conflicts in the Middle East.

As a forward-looking investor, I am seeing a great deal of value in the beaten-down oil explorers and oil service companies.

If you are able to live with some risk at the expense of high reward, now is the time to buy.

The Nixon Shock
Editor Christian DeHaemer tells you how to profit from the biggest commodity move since Nixon took the dollar off gold in 1971.
Mining Strikes in Peru Leave Copper Shortfall
I'm not sure if it was Cannes or Marseille, but it was one of those French Mediterranean towns where the houses waltz down to the sea. We were drinking thick coffee and admiring the boats... The largest was the gilded white pleasure yacht of some third son of a Saudi.
Buy Before the Next Jobs Number
I graduated in the teeth of the 1993 recession. You heard the same complaints from twenty-somethings we hear now: high debt, no jobs, having to work at the Gap, etc. With no ready employment, I moved to a ski resort to run the lift line and work on my moguls. You can do that as a young, single guy... I imagine there are plenty of people doing it now.
Buffett's Envy: 50% Annual Returns, Guaranteed
Warren Buffett once told investors at an annual shareholder meeting, "...it's a huge structural advantage not to have a lot of money. I think I could make you 50% a year on $1 million. No, I know I could. I guarantee that."