The Return of Peak Oil?

Speculators were to blame for pushing oil to these unprecedented levels.

At a June 17 Congressional hearing, an assembled panel of "experts" unanimously agreed that speculation is responsible for driving oil prices 50% higher than they would otherwise be.

As a result of the hearings, the House on June 26 voted 402-to-19 to direct the Commodity Futures Trading Commission to use all its authority, including the agency's emergency powers, to "curb immediately" the role of excessive speculation in energy futures markets.

The House bill required the CFTC to act against "sudden or unreasonable fluctuations" in energy futures prices and other trading activities that "prevent the market from accurately reflecting the forces of supply and demand for energy commodities."

Six months after the Congressional hearings, oil sank to a multi-year low of $32 a barrel.

This prompted a chorus of morons to sing, "Told ya so."

Some even suggested oil would return to its historic normal level of $22 a barrel.

What a difference half a year makes. 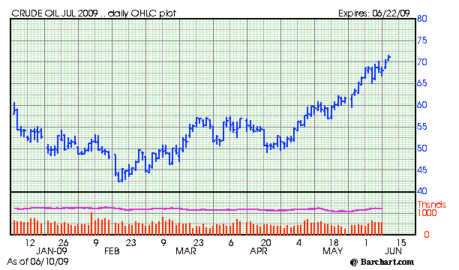 Are speculators responsible for this move?

The Economics Behind Current Oil Prices

Another reason for the rise in oil is a lack of investment. As energy companies pinch pennies to preserve cash and remain profitable, projects to produce costly oil have been delayed or shutdown altogether.

So, as demand has declined with this economic downturn, so has the supply of oil. In other words, supply is keeping pace with demand.

And when the global economy rebounds, there will be hell to pay as demand begins to increase.

Because the projects that were shut down were meant to help supply the global economy with oil. It will take months if not years to bring them back.

This will cause a severe disequilibrium. . . and investors who foresee this imbalance are gonna clean up.

In February, I loaded up on energy and gas trusts. I got lucky.

I held my nose and dove in, purchasing trusts like Baytex Energy Trust (BTE - NYSE) for $9.50. Today Baytex trades for nearly $18 a share. . . and at the time of my purchase, was kicking off a dividend of 13%.

It's not too late to get positions in Baytex or in the oil sector in general. In fact, my colleague, Ian Cooper, recently revealed the details behind one of oil's most profitable secrets... a rare opportunity to actually collect at least double the gains oil makes.

Since that 60% price spike in February? Investors following his advice are already up more than 159%. And this run's just getting started.

To find out exactly how it works and - more importantly - how you can take advantage of it, starting today, just click here!