Owning GE is a No-Brainer

There have been volumes written about the George W. Bush/Dick Cheney presidency and its connection with energy company Halliburton.

You may know Halliburton from such events as laying the bad cement which may have caused the BP oil well blowout that sent record amounts of crude oil into the Gulf of Mexico.

It is no secret that former Vice President Dick Chaney was the CEO of Halliburton Co. from 1996 to 1998, and again in 2000. During that time, Halliburton moved from number 73 to 18 on the list of the Pentagon's top contractors.

Nor is it news that people with connections in government peddle influence and make deals.

Never bring a knife to a gunfight when you can bring a subcontractor... 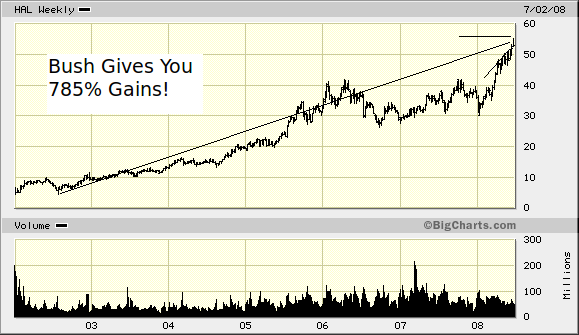 Now, I'm not here to change the world. As an investor, I really don't care about the long list of graft, corruption, and government waste attributed to Halliburton over the years...

I live in the real world, and I want to make money.

Forget about the past. As investors, we want to know the safe, sure, and easy way to make almost eight hundred percent off the graft, corruption, and bribery of the current administration...

I first really became aware of Mr. Immelt in the run-up to the 2008 presidential election. He was on one of those PBS talk shows like Charlie Rose, singing the praises of the future Obama presidency.

My first thought was, why would a major business player want to go along with the anti-business agenda of Obama?

But then Mr. Immelt said, “I look at things like energy security, renewable energy... Both of them are good for GE."

It was at that point I realized GE capital was in a world of hurt and needed a bailout. Futhermore, GE makes a lot of health care technology...

The more I thought about it, the more I realized that GE and Obama were Siamese twins. GE had its thumbs in wind turbines, medical equipment, nuclear, water, power storage, charging stations for EVs, and a whole host of government subsidized green technologies.

Since 2005, GE has created and run a PR and advertising campaign called "Ecomagination." Immelt recently said of this initiative: "Ecomagination is GE's commitment to address challenges such as the need for cleaner, more efficient sources of energy, reduced emissions and abundant sources of clean water."

GE also owns NBC, which in turn owns a ton of cable networks — including MSNBC. That's the one where Chris Matthews was famously quoted as saying “I felt a thrill going up my leg as Obama spoke.”

For his help in getting Obama elected, Jeffrey Immelt got a seat at the table.

A seat at the table

This group set about helping Obama in saving the U.S. economy. And it has worked — for GE's economy, anyway...

Think about what GE makes and who will profit from the recent legislation. In just one easy-to-understand example, Obama has mandated that you can't buy a incandescent light bulb after 2014.

How much money will GE make when everyone has to buy more expensive, higher profit-margin, light bulbs?

Hard to say, but on September 27, 2010, they made their last incandescent light bulb in the United States and fired the last 200 people at the Winchester, Virginia, plant.

The latest in health care reform means everyone will need to join a Health Information Exchange, which will integrate hospital information systems. Again, a GE payoff.

Selling the polls for profits

And then there's the foreign affairs angle.

The Washington Examiner ran a piece about a year ago about some quid pro quo regarding the shutdown of the Polish missile defense shield. After Obama met with Russian Leader Putin and agreed to kill the Eastern European missile shield, Rueters reported:

"Shortly after the pullback on the shield programme was announced, Russia's government said Prime Minister Vladimir Putin would meet several U.S. executives on Friday from firms including General Electric, Morgan Stanley as well as TPG, one of the world's largest private equity firms."

More recently, Barack announced $10 billion trade deals with India, claiming the deal will create 53,670 U.S. jobs. He changed export rules to make it easier for U.S. companies to do business in India. The United States also relaxed control on India’s purchase of “dual use” technologies that could be used for civilian or military purposes — which will clearly benefit GE.

The Indian Air Force and civilian Spice Jet Airlines will buy a combined 44 planes from Boeing, with engines from General Electric. The United States will be in a position to export almost one billion dollars in high technology aerospace products.

GE was also selected to supply six advanced class 9FA gas turbines and three steam turbines for the 2,500-megawatt Samalkot power plant to be constructed by India's Reliance Power Ltd. GE is currently in talks to get around legislation so it can sell nuclear turbines to India.

The Ministry of Railways said GE was one of two bidders for a venture to manufacture 1,000 diesel locomotives over 10 years. The estimated U.S. content of this contract is expected to exceed USD 1 billion.

It is no wonder that GE expects India sales to grow 30% annually. 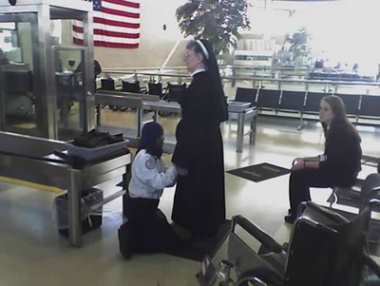 GE said Thursday it will buy 25,000 electric vehicles for its fleet through 2015 in the largest-ever purchase of electric cars.

Ever notice who makes those airport scanners?

Don't get me wrong; I'm here to praise GE, not to bury it. The company has mastered the art of media spin, political control, and hardcore business savvy.

I don't see how they can lose. 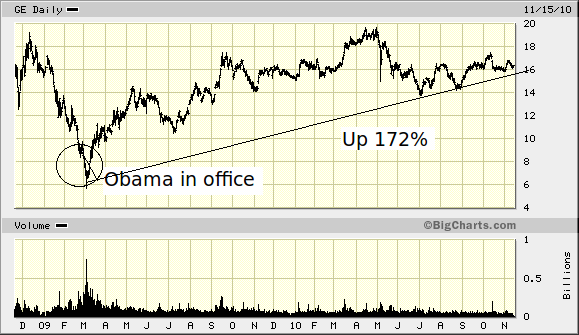 General Electric pays a 2.90% dividend, has a forward P/E of 12, a quarterly growth rate of -17%, and the ear of the American President — the same guy who tops Forbes' Most Powerful People list.

Obama has at least two more years to be generous to his backers. He might have four.

Buy GE today and sell when it is clear Obama will be out of office.