How to Profit from Government Foolishness

Here's the deal: Overt political attacks coupled with an abundance of natural gas is killing the coal industry in the United States.

The country is producing — and using — less coal. And this is happening at a time when emerging markets are rapidly increasing their use of coal for electricity.

Here are the facts:

Fact: The IEA reckons India could surpass America as the world’s second-largest coal consumer by 2017. 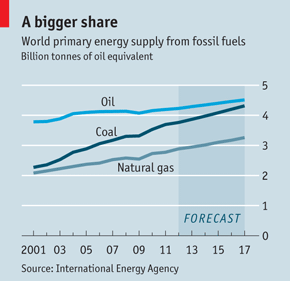 Logic would dictate that the government would smooth the way for exports, and turn America into the Saudi Arabia of coal. This would help balance our global trade deficit, ease debt through export taxes, and create tens of thousands of new jobs.

The reality is the government is attempting to shut it all down.

The most recent example is the death of the $3 billion Las Brisas coal power plant in Corpus Christi, Texas.

Chase Power announced yesterday it was canceling the project. As reported by the Corpus Christi Caller-Times:

Chase Power... has opted to suspend efforts to further permit the facility and is seeking alternative investors as part of a plan of dissolution for the parent company.

The plant would have employed an estimated 2,900. And so it goes for the little guys.

The big boys play by different rules. We've told you before how Warren Buffett and President Obama conspired to shut down the Keystone Oil Pipeline...

According to Forbes, “Coal is one of the biggest single items the nation’s railroads ship every year, making up 21% to 24% of the total volume and upwards of 31% of the company’s freight revenue.”

Other railroads like CSX are getting hurt because they aren't on a coal export line, which runs from the upper Midwest to the Pacific Ocean.

In the Eastern Hemisphere, they have no qualms about coal. China has a pipeline of coal projects estimated to produce 620 million tonnes of coal by 2015, while Australia plans to expand coal exports to 408 million tonnes by 2025.

There are a number of ways to play the long-term growth in emerging market demand for coal.

The problem with ETFs is that you get the good with the bad.

In the current market environment, you want to own a piece of the Australian coal industry. 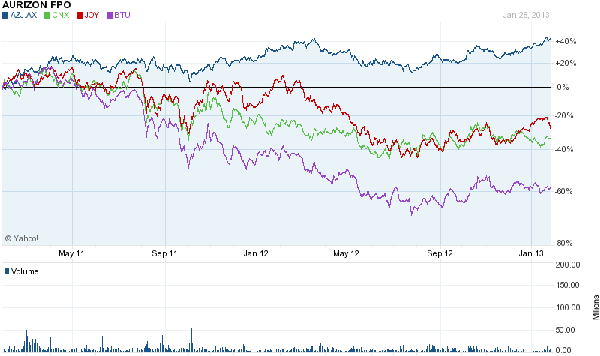 The one that's going up is AURIZON.

In 2011-2012 Aurizon transported more than 250 million tonnes of freight — including coal, iron ore, other minerals, agricultural products, and general freight.

The company also operates and manages the 2,670-kilometer Central Queensland Coal Network that links mines to coal ports at Bowen, Mackay, and Gladstone.

Maybe this Buffett guy knows a thing or two...