Stocks to Buy With Your Stimulus Check

Stimulus checks are coming! I got an email from my bank letting me know that anyone who is getting a stimulus check can start looking today.

Some families will get several thousand dollars depending on how many children they have.

And as you already know from my well-spoken colleague Monica Savaglia’s article yesterday, many folks are planning to invest at least some of that money in the stock market.

The total figure getting disbursed is nowhere near the overall price tag of $1.9 trillion, but it will add up to several hundred billion dollars.

A large chunk of that will go into equities — 37% according to Deutsche Bank and between 53% and 79%, depending on income bracket, according to Bank of America.

Whether it’s the low side or the high side, you can bet it’ll be a major catalyst for the already hot stock market.

So a smart investor is looking at companies right now and trying to figure out the best place to put that fresh cash.

And since you’re reading Wealth Daily, I know you’re smarter than the average investor. That means you’re thinking about where to put what stimulus money you’ll be getting already.

So to make your life a little easier and remind you of why you and all the other smart investors read Wealth Daily, I thought I’d give you my three top spots to grow your stimulus check into a real nest egg...

Stimulus Sector #1 — The Network Behind 5G

If you’ve read my articles for any length of time, you already know how bullish I am on 5G. The network is going to make the technology we’ve only dreamed about a reality.

But there’s a major roadblock standing in the way of a true nationwide 5G network in the U.S., and it’s the physical connections needed to get all that data from the airwaves and onto the cloud.

That’s because the cloud is really just a bunch of massive buildings filled with servers that need a physical connection to the outside world to transfer data back and forth.

The only physical connection that’s fast enough and big enough to handle the speeds and size of the data on a 5G network is something called fiber-optic cable.

There’s not enough of it to go around, so the wireless carriers, cable companies, even government agencies are all scrambling to figure out how to get a 5G wireless network connected to the real world.

That’s where my first stimulus stock comes into play. You see, for years this company had been quietly building a vast network of fiber-optic cables. And now, it has the biggest network of its kind in the entire country.

In fact, every single city that already has 5G access has it largely because it’s privileged enough to be on this company’s fiber-optic map.

Below is a map of 5G-enabled cities on the left and a map of this company’s fiber network on the right:

But this company has no interest in running its own 5G network.

And because of that dominance in the fiber-optic field and its disinterest in being a 5G provider, every single major wireless carrier has already inked deals to “share” this network with the company.

You can think of the access deal like paying a toll to drive on a highway. Sure, you can drive on the backroads for free, but if you want to get somewhere fast, you need to pay that toll and get in the express lanes.

And that’s exactly what this company is doing with its fiber network. It’s charging a little “toll” to access the network, and those tolls are already adding up to billions of dollars a year.

You can access a presentation detailing the company and its dominant place in the future of 5G by clicking here.

Stimulus Sector #2 — The Advance of Technology

The services were great, but switching from one app to another got kind of frustrating. And what happened? A little company called Roku ran with the idea and gave investors a 1,998% profit. 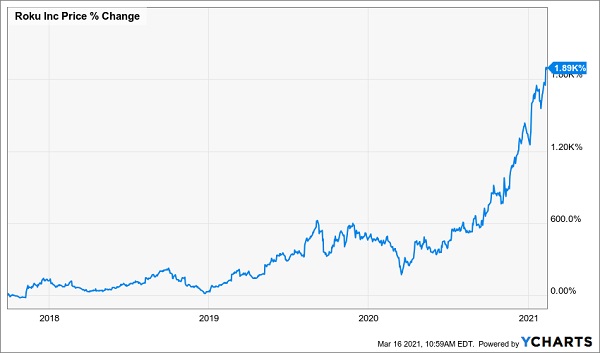 That’s the kind of potential I’m seeing in this next opportunity. My esteemed colleague and confidant Christian DeHaemer tipped me off to it a few weeks ago.

The best way I can describe it is a Roku box for the advanced technologies 5G will usher in. Again, I’m talking about augmented reality, virtual reality, the internet of things...

It’s not an actual box like Roku, but all those new technologies will be linked together by this breakthrough. It’s the kind of thing we’ll marvel at the creation of decades from now, and it’s all getting started as I type.

Oil and gas companies are using this technology to plan and build giant offshore oil rigs because it can predict and prevent dangerous mechanical failures before they happen. It’s already saving millions of dollars and countless lives around the world.

Car manufacturers are using this technology to speed up design times, boost performance, and test drive cars before they’re even built.

This technology is also already guiding drivers in real time and warning them of potentially deadly hazards, potentially saving millions of lives and a fortune in insurance premiums.

Christian has zeroed in on a company that’s going to help make all that continue to happen… and potentially make investors rich beyond their wildest dreams in the process.

He’s put together a presentation detailing the technology and explaining how you can get in on the ground floor today. Just click here for access.

Remember back in 2014, when you first heard about cannabis stocks like Canopy Growth Corp.?

If you do, then you’re lucky because you had the opportunity to ride this massive wave of profits all the way from the bottom to the top: 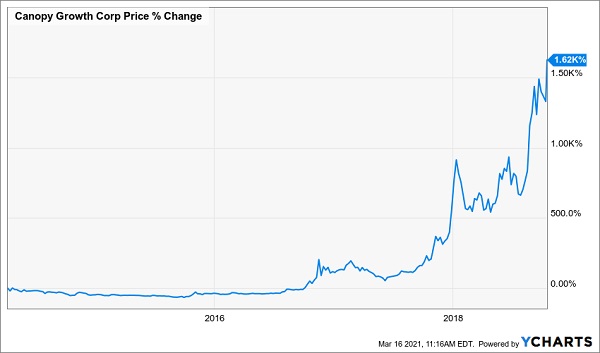 You read Wealth Daily, and we were on top of the cannabis boom very early, so it’s possible you did.

But if you’re like most investors, you didn’t hear about those massively profitable pot stocks until 2018, when all those massive profits were already had. You probably wish you could go back in time and get some skin in the game.

Well, unfortunately, I don’t have a time machine for you. But I do have the next best thing...

My colleague, world-renowned cannabis stock analyst Jeff Siegel was one of the very first people to talk about investing in the cannabis industry way back when it was still in its infancy.

He tipped me off to stocks like Canopy, Cronos, and Aphria back when they were still trading for pennies and changing hands over the counter.

And now he’s telling me he’s found the next industry that’s poised to explode and deliver the same kind of gains those small pot stocks did as they grew to become household names.

It’s all centered around recent discoveries and research into something he calls “Molecule 520.” I won’t even try to explain the science behind it, I wouldn’t do it justice.

But I will tell you that it's already helping doctors treat all sorts of mental health disorders, from PTSD to anxiety and depression.

And it’s already delivering massive gains to investors who know where to look.

Jeff’s put together a presentation on the industry, the molecule, and the companies racing to commercialize it. He’s convinced (and I am too) that these gains could even make the pot stocks look like peanuts.

You can get access to all the information by clicking here.

There’s a big catalyst coming for stocks, and when I say big, I mean nearly $1 trillion big.

So if you have money to invest now, you should be investing it before those stimulus checks hit. That way you’ll get to ride the wave of gains that come shortly after.

And when the checks do come, make sure you’re investing that money in companies that will do well with it. Don’t get caught up in the hype on TV or the memes on social media.

Invest in solid companies that are advancing a trend that has real staying power.

And listen to people you trust; people with a history of being ahead of the curve in the market; people like my fellow editors and analysts here at Wealth Daily and our sister site, Energy and Capital.

If you do that, you could turn that $1,400 stimulus check (or however much you get) into a real nest egg worth bragging about.

So take a little time today while you’re waiting for your check to deposit and get your shopping list together.

If there’s nothing else on it, you should at least have the “5G Tollbooth,” Christian’s advanced technology play, and the company bringing "Molecule 520" mainstream.