I'm not sure if I was in Cannes or Marseille, but it was one of those French Mediterranean towns where the houses waltz down to the sea.

We were drinking thick coffee and admiring the boats... the largest was the gilded white pleasure yacht of some third son of a Saudi.

I was at this cafe with the typical group of high-rolling international investors on some pretense of a telecoms deal.

It was late 1998, and the euro was about to be introduced as the replacement of the ECU. The moneymen around me all believed the great fiscal experiment would fail.

The reasoning went that in the United States, you can pack up and move when you lose a job. So the problems with high unemployment in one state and overheating economies in another don't add too much torque to the system...

But a Greek with all his family on some island is less likely to pack up and get a job in Frankfurt.

Theoretical debates over inflation and interest rates have turned into sovereign debt and the balance sheets of French banks.

Back to my point, one of my brunch mates, Brian Hicks, said ten years ago, “It will fail because the Germans won't put up with it.”

He also added a little-known tidbit. He mentioned that the new euro coins would contain no nickel. And he was telling anyone who would listen to short the metal as millions of coins would go out of production and demand would dry up.

Turns out he was right. The price of nickel fell for two years, until 2001. 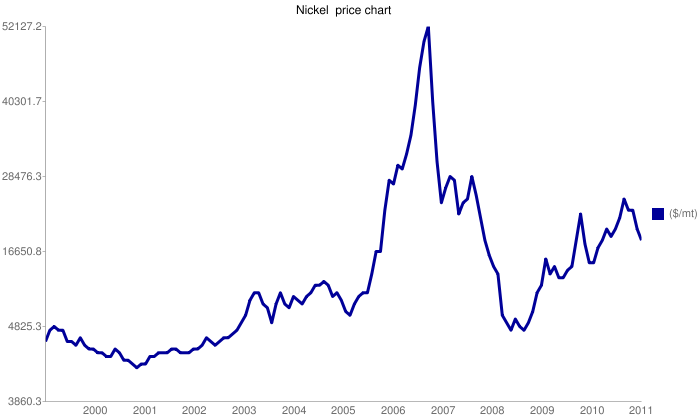 Does this mean a return to pre-euro currencies like the deutsche mark would suggest that nickel would rally?

Jack Up the Printer

Last week, it was widely reported that Germany had started printing up DM again. From MoneyWeek:

"Germany is printing deutsche marks in preparation to leave the euro common currency," says Philippa Malmgren, a former economics adviser to George W. Bush. "My view is that it is Germany that will have to pull out of the euro."

"The decision has already been made by the government that leaving the euro is a possibility. I think they have already got the printing machines going and are bringing out the old deutsche marks they have left over from when the euro was introduced."

Malmgren, co-founder of Principalis Asset Management, acknowledged that leaving the euro would be a radical move that would cause Germany's export prices to jump, but said German industries are strong enough to handle price increases.

Over the weekend, it looked as if the euro mess was going to be worked out and commodities started to rally.

G20 leaders met in Paris and said they expected to "decisively address the current challenges through a comprehensive plan" at another meeting on October 23rd.

But today German Finance Chief Wolfgang Schaeuble said the new meeting would not produce a definite solution to the Eurozone debt crisis. Perhaps it shall be sent to a committee for further dalliance...

The longer the solution takes, the more likely Society General can work the bad loans off its books.

As we wait to see what the new franc and DM will be made of, copper is bouncing off the bottom. 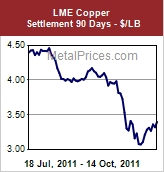 Three weeks ago, the metal rallied and is now looking very much like a dead cat bouncing (I believe I told you to buy copper at that time). The price has climbed some 15%.

Part of the bounce had to do with a resolution of the euro debt crisis; part of it was an increase in risk appetite; but most of it had to do with strikes in Peru and Indonesia.

The Peruvian union pulled out of talks with U.S. miner Freeport McMoRan (FXC). Some members threatened to go on a hunger strike to press demands for a pay hike.

This month-long strike has set up a supply shortage of 670,000 tonnes this year. The annual copper market is 20 million tonnes.

In Crisis & Opportunity, I'm looking at one copper miner that isn't battered by strikes — and that pays a fat 6.2% dividend.

If the Eurozone finds a solution to its debt problem, copper will rally based on more risk appetite.

If the euro disbands, copper may go up on the new production of pfennige.

If the status quo drags on, copper will go up on the supply shortfall.

God forfend if we get a falling unemployment number — or a surprise manufacturing expansion.