Make Your Portfolio Fatter Than a Thanksgiving Turkey

Family gatherings hold a special place in all our hearts.

Spending time with loved ones...

Indulging in the spiked eggnog...

Getting into heated political debates with your inebriated uncle...

Listening to your teenage nephew brag about his huge Dogecoin win...

So when you sit down at the adult table tomorrow, hopefully you can do some bragging yourself.

We’re not supposed to mix money and family, but with retail investors taking charge of Wall Street this year, it’s sure to spark some healthy conversation.

Now, our goal here at Wealth Daily is to lead you down the path to financial freedom.

But we’ve also done our job if you can take our investment ideas to your next family gathering or cocktail party and be the person everyone can’t wait to talk with. 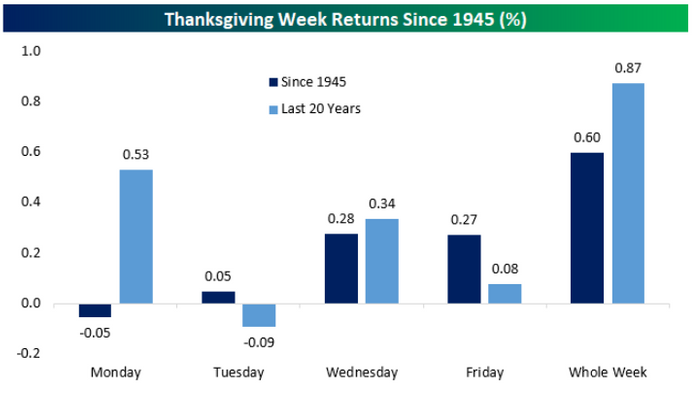 With markets choppy, it’s best to tread lightly but watch the trends intently.

Here are three investing themes that are sure to come up at the dinner table tomorrow, with stocks in each sector that I’m watching.

Video games are no longer just for children.

To say the video game industry has been on a tear would be an understatement.

One company that's been at the forefront of the industry since the '90s is Activision Blizzard (NASDAQ: ATVI).

According to its latest income statement, Activision has $9.05 billion in revenue and $10 billion in total cash.

Just last month, analysts upgraded the stock, with an average price target of $114.52.

But since November 1, the stock’s dropped more than 20%, shaving nearly $13 billion off its market cap after investors and analysts turned against the company.

In July, the California Department of Fair Employment and Housing sued Activision over allegations of harassment and discrimination.

Even worse, in August a second lawsuit filed by the U.S. District Court for the Central District of California on behalf of investors alleged Activision failed to disclose its workplace drama to the board of directors and stockholders.

And just this month, The Wall Street Journal reported that CEO Bobby Kotick knew about sexual misconduct at his company for years and didn’t take action (I recommend listening to The Journal podcast in your free time for some great reporting).

Further, Phil Spencer, vice president of gaming at Microsoft and head of Xbox, said the company’s evaluating all aspects of its relationship with Activision.

Things aren’t looking so hot for the most popular video game-maker...

But a technical indicator I like to use called the relative strength index (RSI) — a measure of the magnitude of recent price changes — shows the stock’s entering “oversold” territory, which means a correction could be imminent.

Analysts were bullish on the stock just last month around $80, and now that’s it trading around $60, I’d say it’s time to buy while there’s blood in the streets.

We’re going to see crazy volume at sportsbooks this week.

The director of trading at William Hill, a global online gambling company, says that historically this week represents the perfect storm for betting on football...

But this year’s different, and sports betting expert Bill Huber at Casino.org notes that although much of the economy has suffered during the COVID-19 pandemic, sports betting has taken off.

With fewer people traveling and spending time with family, many will turn on the TV and place a few bets.

Look, investing in sports betting or vice stocks is a Catch-22. We don’t condone addiction in any way, but companies like DraftKings (NASDAQ: DKNG) have been proactive in giving users the tools and resources they need to gamble responsibly.

Much of the company's advice can be used when trading stocks as well...

At DraftKings, we believe that life is more fun with skin in the game, and we want it to stay that way. That’s the significance of safer play. It’s important to remember that you should only bet what you can afford and always set reasonable limits for yourself. Gambling should not be viewed as a pathway to financial gains. Gambling is not a shortcut to financial success.

That last part is an important distinction between trading and investing.

Investing is the path to financial success, where you buy and hold, reinvest dividends, and let compound interest do its magic.

Trading is a form of investing where you chase short-term gains. And although trading is still nowhere close to gambling, you should never view trading stocks as a shortcut to riches. That’s a surefire way to get burned.

DraftKings is down more than 25% for the month on an earnings miss. It reported a loss of $1.35 per share on $212.18 million in sales compared with analyst estimates of an $0.87 loss per share.

But forward earnings estimates between $1.7 billion and $1.9 billion for 2022 show that DraftKings isn’t slowing down.

RSI indicates that DraftKings is currently oversold, which means a correction could be coming soon.

You can use insider purchases as a barometer for what you should pay for a security, and three directors just purchased more than $2 million worth of DraftKings stock Monday at an average price of $37.66. It's now trading for less than $37.

I always like to get into stocks for cheaper than the insiders did.

If you're interested in learning more about the sports betting market and three little-known companies that'll be raking in the dough this week, you'll want to watch this immediately.

That’s because crypto has exploded in popularity among youngsters, with 15% of Americans between the ages of 18 and 34 owning crypto.

Stocks and exchange-traded funds in the space have outperformed the broader markets as well.

Everything Blockchain (OTC: OBTX) triggered my trading system in July as it entered oversold territory and had heavy insider buying. The stock rose nearly 200% in one month. The company performs blockchain development and consulting, which are much-needed services as more retail investors pile into crypto. I still like the company.

Two years ago, everyone was talking about Bitcoin at Thanksgiving when it was trading around $4,000.

I think a lot of folks forget about the volatility of the market and just how quickly it can turn sour.

Sure, we’ll still see crazy price swings, but crypto in general has since “stabilized” as billions of institutional dollars prop it up.

Year over year, Bitcoin and Ethereum remain the most consistent profit-makers, rising 201% and 642%, respectively. 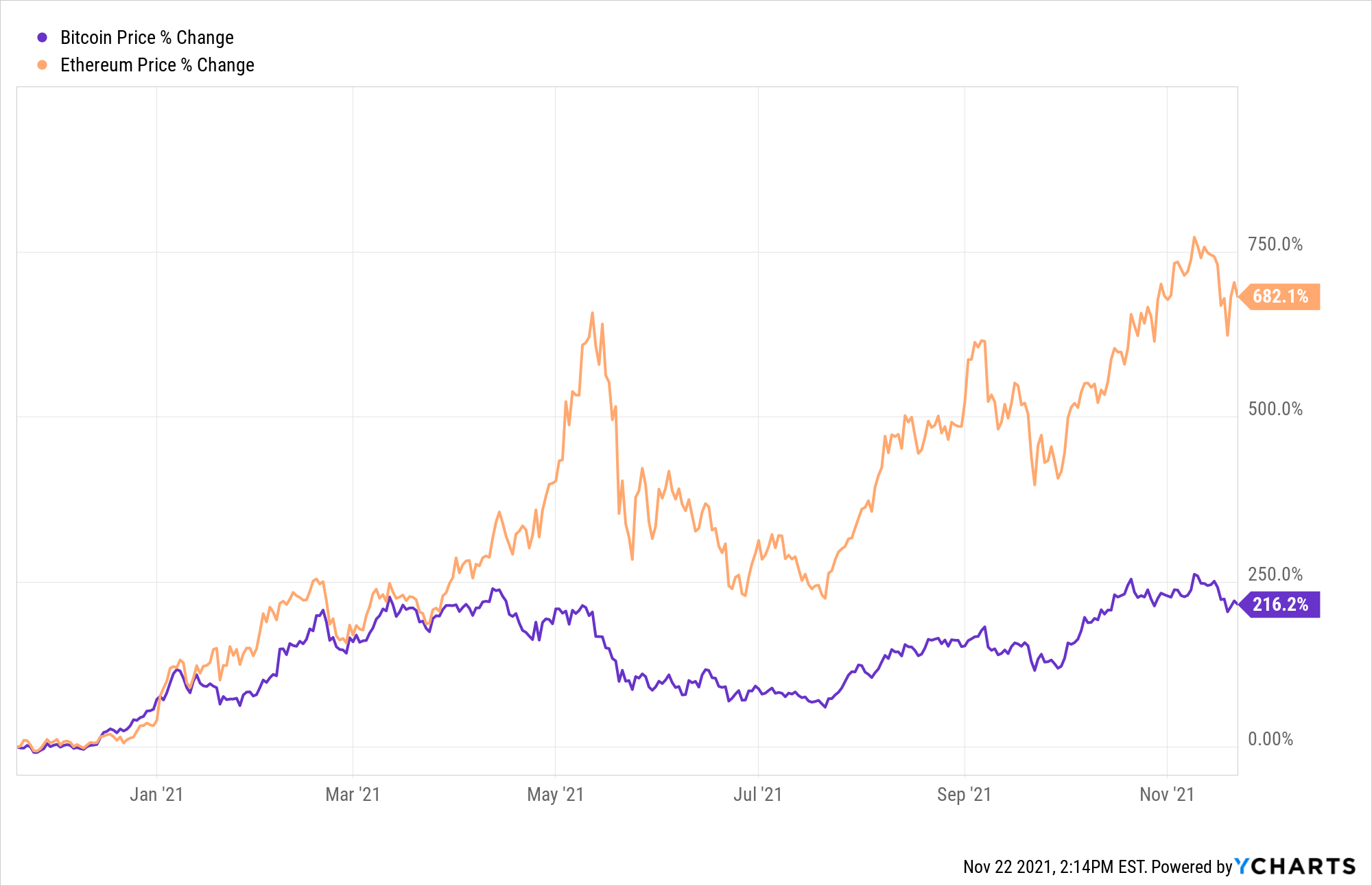 It’s difficult to make outsized returns with Bitcoin, though. You’ve got to plop down $56,000 just for one coin and hope it keeps going up.

But we've found a way get those outsized crypto gains without even owning any crypto... more details here.

Hopefully these ideas give you some fodder for your family gatherings this holiday season.

Cheers to a happy Thanksgiving!