Low Inflation Now, but What Next?

The running of the bulls on Wall Street these past few years has actually been more fantastic than most people realize. As if the S&P 500’s stellar climb of 800 points since the last correction of 2011 wasn’t fantastic enough nominally, the low rate of inflation during this period has made the run even better in net value – especially compared to similar bull runs of the recent past. 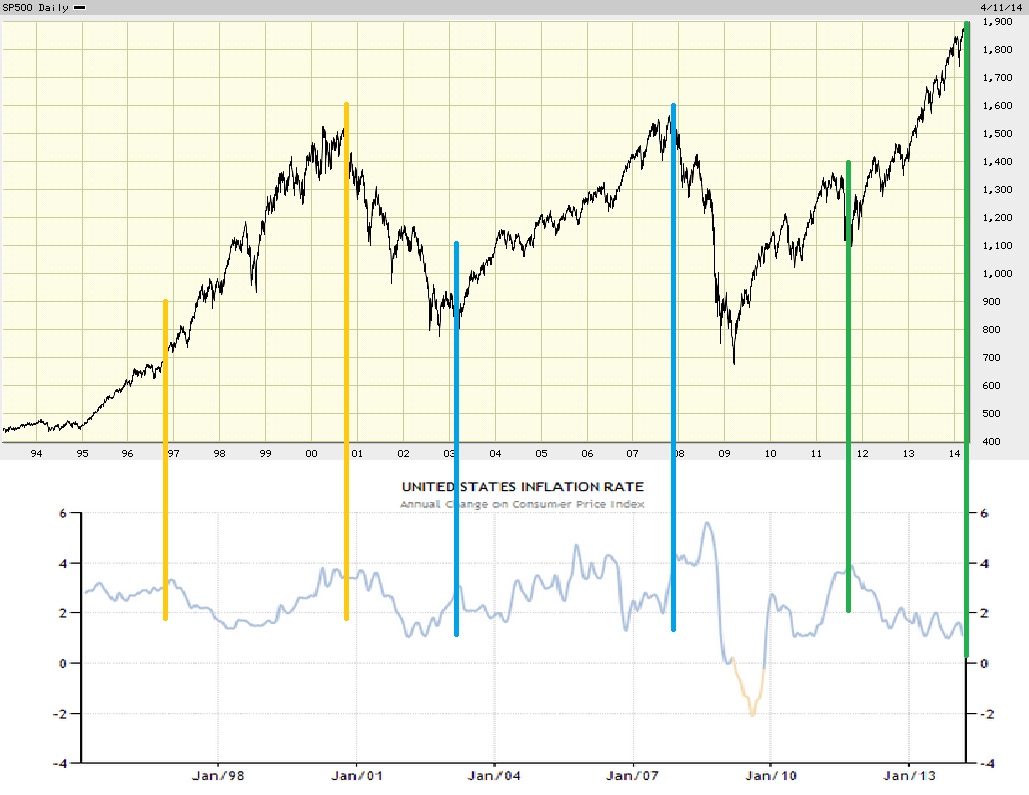 That may not seem like much of a difference, but it does make the recent gains in peoples’ retirement and investment accounts that much more potent when the cost of living does not rise as much as before.

Yet while low inflation may have delivered an added bonus to investors, experts are sounding the warning that continuing low inflation runs the risk of undermining the global economic recovery.

Is inflation too low? Is this a case of having too much of a good thing?

Over this past weekend, the International Monetary Fund’s policy committee drew attention to the harm being caused by what it called “stubbornly weak price increases” over the past five years since the last financial crisis, urging central banks the world over to increase their efforts to coax inflation up.

The IMF is worried that low inflation will undermine the global recovery, in part because it makes debt too expensive to service. While a weaker currency is great for nations with high export income, since they can earn more of their own money when they sell their products, a weak currency is counterproductive for nations with enormous debts, since it requires more of the local currency to cover loan payments and interest.

Draghi seems to also agree with the IMF’s call for continued central bank intervention, as he announced his resolve to flood Europe with liquidity. “A strengthening of the exchange rate requires further monetary stimulus,” Draghi affirmed over the weekend. “That is an important dimension for our price stability.”

Draghi and the ECB remain fully committed to driving inflation up to their 2 percent target, even if it means following in the U.S. Federal Reserve’s stimulus footsteps by purchasing bonds, pumping Euros across the continent, increasing liquidity and igniting inflation.

Investors need to be cautious if they trade Euros, as the currency may come under pressure soon. If the EU’s April inflation rate comes in at near the same dismal 0.5 percent level as in March, the ECB may announce stimulus measures as early as May. Though some experts believe the central bank will want just one more bad number to confirm their move, likely pushing any stimulus measures into June.

Does this mean, then, that the U.S. Federal Reserve got it wrong when it began reducing stimulus? Might the IMF’s warning this weekend influence the Fed to move back toward increasing its bond purchases instead of continuing to decrease them?

Is America’s Inflation On Track?

While the Euro Zone’s inflation rate may be a paltry 0.5 percent, America’s rate is a slightly more decent 1.1 percent, with tomorrow’s updated number forecast to be 1.3 percent. Since the Federal Reserve expects stronger economic growth over coming quarters, it seems confident the inflation rate will soon reach its 2-2.5 percent target before long, and is thus comfortable reducing its monthly stimulus program, which should be terminated before the end of this year.

But that means inflation is on track, doesn’t it? Why are some economists saying inflation is too low? Aren’t equities and housing super inflated already?

In a sense, yes, the Federal Reserve has achieved stoking one type of inflation – wealth creation. But that is only half of the inflation picture. The other half is inflation of wages and the cost of living. All need to rise in balance if the gains are to be retained. If one half inflates without the other, the resulting imbalance creates bubbles at one end which eventually burst as the economy balances itself out. And the result is never pretty when the economy is left to balance itself out.

We have to remember that the financial crisis wiped out trillions of dollars’ worth of wealth around the world.Nations everywhere are attempting to reclaim as much of that lost wealth as they can. One way to do so is by lowering interest rates and flooding the economy with money through stimulus, making mortgages more affordable for home buyers and capital more available to companies. The result is an inflating of homes and stocks.

But that’s just an inflating of wealth; it’s not an inflation of prices. Unless wages and consumer prices inflate by a comparable measure, the inflated values of properties and equities will be unsustainable, since workers will simply not be able to afford them, and prices will correct right back down again. Wage inflation is what holds all other types of inflation up and keeps them from deflating right back down again. In other words, wage inflation prevents bubbles from bursting. And the U.S. does not have enough of that type of inflation.

The whole point of monetary stimulus is to put more money into people’s hands to stimulate consumerism and economic growth. But after three rounds of Quantitative Easing stimulus measures, the only wealth created is frozen wealth (capital) locked in homes and stocks. There hasn’t been an increase in liquid wealth (cash) in people’s hands and bank accounts. As such, there still isn’t enough money circulating through the economy to stimulate consumption and business growth.

That’s why inflation is still low, despite highly inflated stock and home prices. Wealth may be high, but it’s frozen and does not turn the gears of the economy. Capital wealth may be high enough for the Fed to scale back its monthly bond purchases. But liquid wealth is still too low for interest rates to begin rising just yet. And this has implications for investors.

What Inflation Means to Investors

As we have already considered at the outset, low inflation has improved the gains in equities over the past several years. And if you are a home owner, you have faired just as well, as the value of your home has risen by a faster rate than the cost of living.

But if central banks around the world – including the U.S. Federal Reserve – are still sticking to their 2-2.5 percent inflation targets, investors should expect slightly lower gains in their stock portfolios. Stocks will still rise in price over time, but their value will be slightly reduced as the cost of living picks up.

So if equities will not present as great a value as they have, what other assets should perform better when the cost of living inflates? Since inflation weakens the USD, we can expect anything that generally trades opposite the dollar to increase in value as the national inflation rate rises. Gold and other commodities should increase, as should foreign currencies relative to the USD.

Bonds, on the other hand, typically fall as inflation rises, since rising inflation is often followed by slight raises in interest rates to keep inflation under control, and rising interest rates increase bond yields which lower bond prices.

Yet now is not the time to transform our portfolios from a low inflation configuration to a high inflation set-up, as inflation simply is not here yet, and the Fed will not raise interest rates until inflation shows up. In fact, some U.S. policy makers are proposing the Federal Reserve should scrap any timetable for raising interest rates and simply pin the Federal Funds rate to zero until after inflation has climbed above and remains above their 2-2.5 percent target.

Remember that while the Fed has been focused on inflating the stock and housing markets, these are not the type of inflation that will prompt the Fed to start raising interest rates. The cost of living and wages need to inflate before interest rates start to rise.

And even when the Fed does begin raising interest rates, they will rise only a little at a time, so that Fed rates above 2 or 3 percent will probably not be upon us until 2016-17. The current period of low interest rates will continue with us as low inflation lingers, meaning that equities and bonds should continue to shine for a year or two more.