The latest scam being perpetrated on citizens of the world by the United States government and the mainstream media is the situation in Libya.

The pile of lies we are told regarding this unfolding drama by the media is absolutely amazing — and it's all designed to keep you from understanding what’s at the heart of the matter: power and oil money.

This is all part of an unsustainable world political situation that's rapidly unraveling.

Look at what happening around the world right now...

People are beginning to rebel against the status quo power block in Washington.

There's chaos in the Middle East and elsewhere, collapse and rioting in Euroland, and wars and rumors of wars as the power junkies jockey for position in almost every corner of the world. 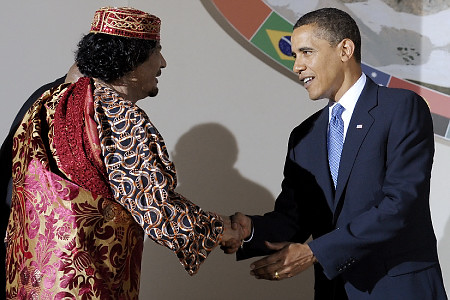 The European Union — once advertised as the ultimate “Garden of Eden” utopian model for the world to follow — is in shambles as one country after another line up for a bailout from Germany, the only country within the EU that has any money...

Economic reality has hit. Major changes are in store.

In the Middle East, the chaos threatens the economic lifeblood of the global economy: oil.

Any disruptions to the flow of oil would be catastrophic to the economies of the world.

Higher oil prices are already sending shock waves throughout the system; even higher prices are likely, given all that is happening.

Intelligent people are sensing and understand that something is going to give, and it looks as if the first thing to take the plunge is the U.S. dollar.

This brings the wisdom of the ages to the forefront for those who know history...

Richard Russell said it best when he recently pointed out: “There is only one certainty regarding paper money — the longer you hold it, the less it will buy in terms of real goods or real money — gold.”

Now these people are beginning to rise up and blame their economic problems on Washington and the Federal Reserve — and rightfully so!

These jackals of economic insanity are the root cause of the ruthless manipulation that has been going on for decades.

As history clearly shows without exception, however, the consequences always come to governments and countries that try create something out of nothing...

The economic consequence phase is definitely underway, and gold and silver prices will absolutely head to much higher ground as more and more evidence and chaos show up in the headlines.

As investors, the choice is clear: You must do something to protect yourself against the coming destruction and collapse of the U.S. dollar.

Stay in dollars and lose, or move to a better store of value like gold and or silver and protect your life’s work and savings.

My mantra for over ten years has been to own physical precious metals and the quality precious metals mining stocks. They have performed extremely well over the course of that 10-year period — better than any other asset class!

They will continue to perform well and, at some point, will go parabolic... but the market will not be without volatility.

When the downside volatility comes, this is your buying opportunity. Take advantage of it.

In some cases, the downside volatility may only last a few days.

As meltdown number two comes, make sure you have cash on hand to invest in what will probably be the last great opportunity to buy on the cheap.

In investing, you either learn to be a contrarian or you become a victim...

Don’t believe the government, Federal Reserve, and Wall Street lies that are designed to bankrupt the country and steal your wealth. Their time is at hand, and a new paradigm shift is underway that will help us get back to true liberty and freedom for all.

It is not going to be easy, and there will be dark years ahead.

But for those who are prepared, there is no need to be fearful... Forewarned is forearmed if you prepare.