It's not often that I support new legislation in Washington.

Truth is, I'd rather see less new legislation and more gutting of current legislation.

But that's a philosophical issue that serves few purposes on these pages.

Instead, I want to tell you about a piece of legislation that was just introduced by a bipartisan group of senators. Because if this particular piece of legislation were to ultimately make it to Obama's desk — and he signs it into law — we could see two wonderful things happen...

First, a huge score for liberty, and second, a huge opportunity to make a boatload of cash.

Right now, legitimate cannabis-related businesses operating in the United States can only operate in cash because the banks won't hold their money or help facilitate financial transactions.

You see, banking services fall under federal law, which also identifies marijuana as a schedule 1 substance, meaning it's illegal to manufacture, distribute, or posses marijuana.

No bank wants to go toe-to-toe with the feds over this. So as a result, most marijuana dispensaries have to hire expensive private security firms to protect all their cash, not to mention their buildings and customers.

It's hard enough to run a profitable business these days; try doing it without being allowed to work with a bank to help you with sales transactions, loans, and safe storage for your profits.

The folks over at Law Enforcement Against Prohibition put out a statement on this very issue, writing:

Right now, it’s the Wild West for marijuana businesses. Criminals know where the dispensaries are. They know the businesses are making thousands of dollars a day and that all of those transactions are in cash. It’s led to some horrific incidents, all courtesy of the federal government. They’re setting these businesses up to fail and, worse, they’re endangering people’s lives.

The Threat of Federal Thuggery

With the threat of federal thuggery still very much a reality for legal marijuana businesses, it's also very difficult to raise capital.

The risk of federal raids makes it very difficult to court investors. Who wants to invest in a company that could be shut down in a matter of hours because some overzealous bureaucrat wants to make a point?

This is why I tend to stick to marijuana investments in companies operating outside of the United States.

More and more, Canada is becoming a safe haven for marijuana investors, and one of my best marijuana plays thus far is GW Pharmaceuticals (NASDAQ: GWPH), which is developing cannabis-based prescription drugs. It's based in the UK, and we're up nearly 80% for the year. Check it out: 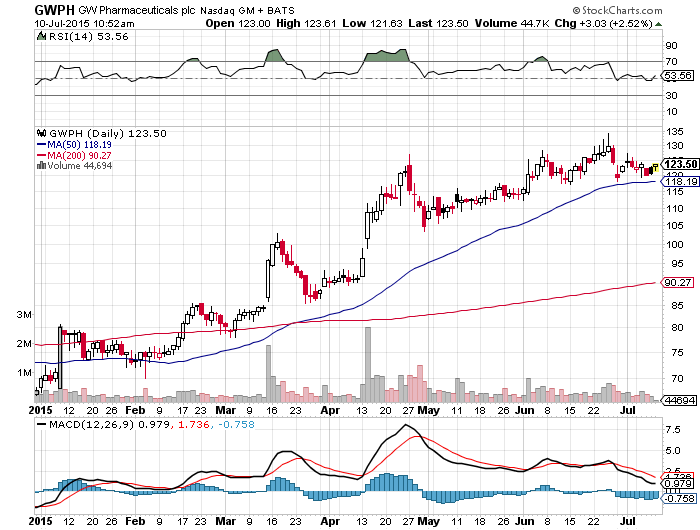 When played right, the cannabis industry can make you a ton of money. But until the federal government stops treating state-approved marijuana operations as criminal enterprises, only marijuana companies operating outside of the U.S. are worth your time. This is one of the reasons I'm so hopeful this new legislation gets some traction.

That being said, this is still a very young industry shackled to a lot of uncertainty. And to be honest, outside of GWPH, there are really only another three or four stocks — out of about 100 — that can actually make you money.