It's Time to Buy Pot Stocks

Can You Hear Me Now?

Earlier in October, I warned you that cannabis stocks were getting too expensive. There had to be a correction coming. And I advised you stay away from those high-flying growers.

I even called out five companies by name. All of them have great value, but all of them had gotten incredibly expensive.

Investors weren’t investing; they were speculating. They were just plain gambling on the future of an industry they didn’t understand at all.

I warned that the Canadian cannabis industry wasn’t big enough to warrant such high valuations. And I said, “When that reality sets in, these high-flying growers may just take a nosedive back to reality.”

And in the week following my warning, all five of those companies saw their stocks drop by double digits: 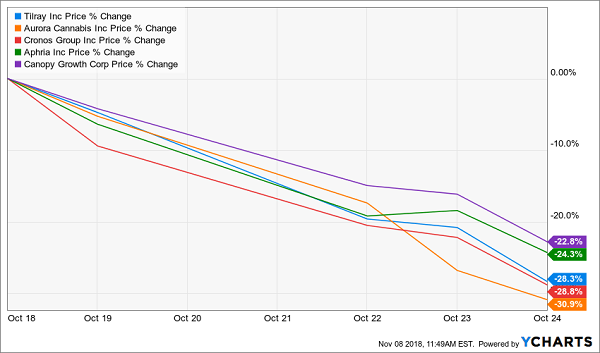 But after that massive drop, I saw an opportunity. Everyone was fleeing the cannabis market. And it was creating some impressive deals for those with a good understanding of the industry.

People were worried it was a crypto crash all over again. But as I said in that week’s article...

There’s a big difference between cannabis companies and cryptocurrency.

That’s intrinsic value. These pot companies have [it].

So, I gave you a list of three of my favorite cannabis investments.

But there was real value behind these companies. And now a lot of that overinflated price tag had fallen off.

So, I gave the go-ahead to start buying the dip. And all three companies I recommended are up double digits since then: 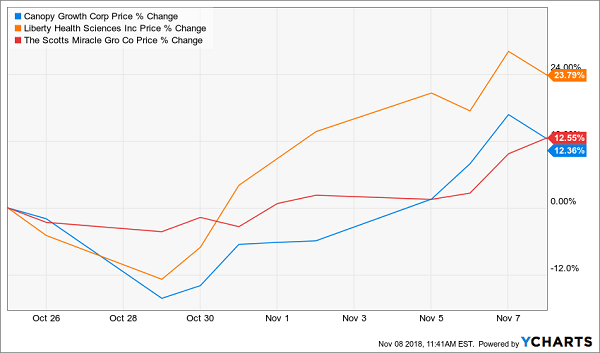 Even boring old Scotts Miracle-Gro popped 12.5% in the past two weeks.

But many of you ignored my advice. Perhaps you got caught up in the fear. Maybe there was a typo in my article. I really don’t know why you didn’t hear me...

But I’m the giving type. So, last week, I wrote again about the opportunity we’ve still got.

I said cannabis stocks still have way more to grow. But you’ve got to know where the intrinsic value lies.

I gave you three more companies that have valuable operations and should weather the storm with ease. They’re all up double digits in this past week alone: 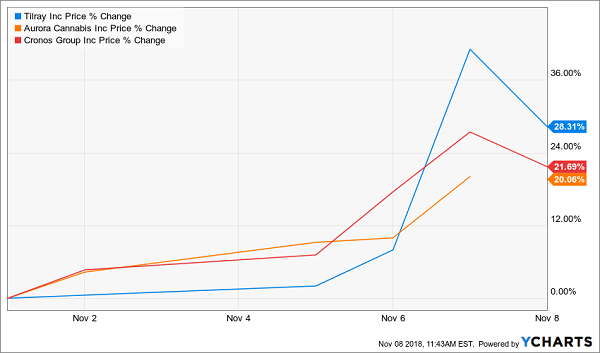 And they’re going to keep on growing. Because U.S. legalization is no longer a pipe dream. It’s a forgone conclusion. And every day we get more news that signals the time is nigh...

Dems Get the House, Everyone Gets the Greenhouse

The major media focus of the midterm elections this week was the shift of power in the U.S. House of Representatives.

But the real news for investors came from three states and one president...

We had four states voting on some form of cannabis legalization. And three out of four voted “yes.”

Voters in North Dakota, where medical cannabis is already legal, voted down a proposition to make recreational grass OK, too.

But both Utah and Missouri relaxed their laws and now allow consumption of cannabis for medical purposes.

The really big — and market moving — news came from the home of Motor City, though. Voters in Michigan approved a measure to make recreational cannabis legal.

And with the massive population in and around that state, the industry stands to see a nice influx of revenue.

Investors liked this and sent shares in cannabis companies up immediately following the results. But those gains were short lived, and most companies gave them up by the next day.

Sessions Out, Cannabis In

Then the real treat came. President Trump made a move folks on both sides of the aisle can agree with and fired Jeff Sessions.

Sessions, in case you don’t remember, was a staunch opponent of legal cannabis. He had gone so far as to threaten to use the power of the federal government to go after companies operating within the confines of their state’s laws and borders.

And pretty much every time he opened his mouth, pot stocks took a hit.

But he’s gone now. And that’s incredible news for cannabis investors in the U.S.

It puts us one very big step closer to federal legalization.

With Democrats in control of the House and a guy in the Oval Office who’s talked before about the tax benefits of legal marijuana, we’re likely to see some more major progress in the fight for full legalization.

So, I’m begging you to take my advice this time.

I think I’ve proven I’ve got a good understanding of the market. And if you’ve taken my advice in the past weeks, you both saved yourself from taking massive losses and pocketed yourself some very impressive short-term gains.

Now, it’s time to start thinking about the long run.

As sin stocks go, cannabis is going to be bigger than alcohol and tobacco. And we’ve got the opportunity to invest in it at its infancy.

There are still going to be ups and downs, but the long-term trajectory is up. And nothing is going to stop it.

All the companies I’ve recommended so far are great. And they’re going to last for the long haul.

The Happiest Place on Earth

But I’ve saved the absolute best ones — the ones with the biggest potential for quadruple-digit gains and the least potential to crater on any bad news.

I’ve saved them for the members of my investment community, The Wealth Advisory.

And they’re incredibly happy with the results so far. Because they’ve been taking my advice this whole time.

So, I implore you to join us and profit alongside the successful investors in our community.

The founder of our company put together a presentation telling you about our absolute favorite cannabis investment and also explaining the many other benefits of becoming a member of The Wealth Advisory nation.

Do yourself a favor and check it out. Then join us for the wildly profitable ride still to come.

Thousands of other investors have, and they’re all very happy they did.