It's Not Time to Get Greedy... Yet

We're keeping an eye on the Fed...

On the Morning of June 6, 1944, Allied troops awoke to a hearty, luxury breakfast of steak, bacon, eggs, toast, butter, and coffee.

It was good for morale.

But according to interviews with WWII veterans, those who ate a light breakfast before the invasion of Normandy — maybe just a Hershey's chocolate bar — fared better on the beaches, as they weren’t weighed down by the greasy chow.

I’m fascinated by little nuggets of wisdom like this.

That eating light can help you survive.

And that something as innocuous as a chocolate bar can be just as deadly a weapon as a Tommy gun.

Hershey even created the first chocolate ration bar for the U.S. Army in 1937.

And it helped win the war.

There’s a Lot of Religion in a Candy Bar

Before the invasion of Europe, the U.S. Army knew that troops would need nourishment throughout the war but that it would be difficult, if not impossible, to supply them.

Troops wouldn’t be able to carry heavy rations of food, either, because it would weigh them down.

So U.S. Army Capt. Paul P. Logan traveled to the Hershey Chocolate Company in Hershey, Pennsylvania, on a secret mission.

Milton Hershey and Logan discussed a plan to make a portable, lightweight, nutrient-dense bar that would only taste slightly better than a boiled potato, since they didn’t want soldiers to eat it too much of it.

What Hershey invented was called the Ration D, made from oat flour, sugar, powdered milk, cocoa butter, and chocolate. It could withstand high temperatures and apparently tasted pretty awful. 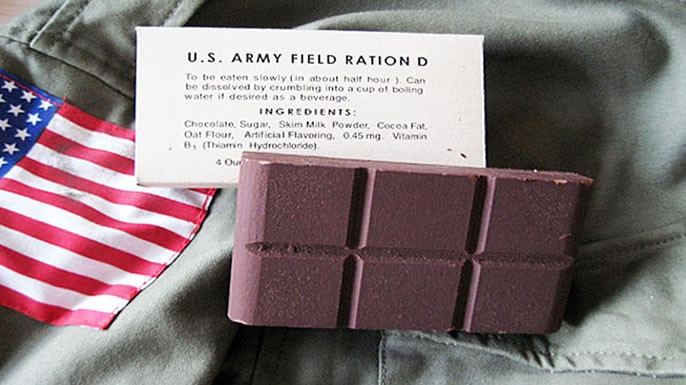 Soldiers recounted that they would in fact rather have eaten a boiled potato.

But it was this ingenious invention that helped fuel Allied soldiers, as the Germans didn’t have anything like it.

According to the Academy of Chocolate...

The Hershey chocolates at that time played a role in maintaining a healthy fighting soldier, particularly during Operation Overlord, which culminated in the invasion and capture of Normandy. The fall of Normandy to Allied troops was a turning point in the war, and the energy that kept American soldiers moving came mainly from the Hershey Chocolate. That made Hershey’s chocolate a part of America’s weapon during the war. Europeans at the time had never seen such a bar of chocolate, and they didn’t have it either. 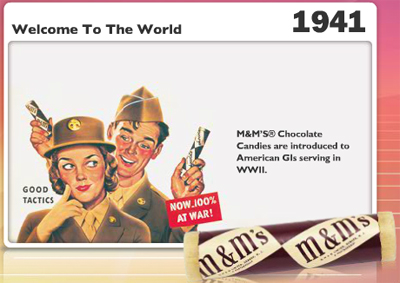 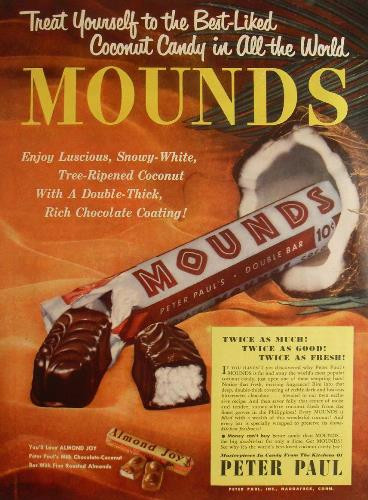 The maker of Mounds and Almond Joy, the Peter Paul Manufacturing Company, even helped the U.S. spy on the German navy in the Atlantic as the company sailed to the Caribbean to purchase coconuts.

If you can’t tell, I’ve got a sweet tooth.

That's because I just took a trip to Hersheypark this past weekend to experience the park on Halloween.

Hands down the best time to go.

Most of the rides turn their lights off so you can ride them in the dark.

One of my favorites and easily one of the greatest of all time, the Great Bear, didn’t fail to impress.

But it reminded me of what we’re seeing on Wall Street this week.

It’s a big week on the Street.

Greed returned to the markets early in the week, with CNN’s Fear and Greed Index giving a reading we haven’t seen for months.

Could this be the start of a market rally?

Unfortunately, it looks like just another bear market rally.

The key driver right now is that companies are posting better-than-expected earnings, which is what truly drives stock prices.

But we’ve got earnings season intersecting with the Federal Open Market Committee’s (FOMC) meeting today, which could bring this party to a grinding halt.

The Fed’s expected to raise rates for the sixth time in a row, another 75 basis points.

That’s because despite the Fed’s aggressive rate hikes, inflation has yet to cool off.

Historically, the Fed raises rates to increase the cost of borrowing, which in theory should bring prices down.

But this inflation cycle wasn’t caused by a red-hot economy that needed cooling.

The pandemic, supply chain struggles, foreign wars, and a determination to kill domestic fossil fuel production have all factored into inflation.

So it has many of us wondering whether the Fed’s rate hikes are even having a positive impact on the economy at all.

Where Rates Are Headed

The Fed’s meeting is scheduled for 2 p.m. today.

Reuters says that 95% of economists polled predict the Fed will raise rates today another 75 basis points, which will put the Fed funds rate at 3.75%–4%.

According to MarketWatch, chief UBS U.S. economist Jonathan Pingle said, “The November decision is a lock. Well, I would be floored if they didn’t go 75 basis points.”

So we should see stock prices slowing or dropping after the announcement.

But it’s important to keep our eyes on the future.

Bloomberg writes that "Contrary to the myth of equity markets being forward-looking, past experience shows stocks kept rising right into a recession and falling through much of it. That means there is more pain to come if you think the U.S. is heading into a recession."

What we're focusing on is any signal from the FOMC about plans to slow or stall rate hikes.

The Fed's dot plot currently shows a half-point increase in December followed by a quarter-point hike in early 2023.

But it's not what's going to pull us out of the bear market.

What the Fed's focused on is inflation metrics.

And there's one critical inflation signal that the FOMC's watching like a hawk.

Because once this inflation metric starts dropping, stocks may very well enter a new bull run of epic proportions.

There's still time, but you'll want to get positioned in these three stocks before then.