It's Always Different Until It Isn't

You know some of the most fateful words in finance are, “It’ll be different this time.”

And I’m hearing them a lot these days about the economy.

And in case you didn’t know, that was a period of high inflation and low growth, or stagflation.

But I’m hearing a lot of analysts out there claiming that it’s different this time.

And one of the strongest arguments they make is that inflation didn’t peak back then until it was well above 14% in 1980.

They’re saying that’s a lot higher than the peak this time of around 9%.

But in order to make that argument, they’re assuming that we’ve already seen the peak of inflation.

They’re assuming that because energy prices have fallen, inflation must be falling too.

But energy prices are notoriously volatile. And they’re being manipulated into falling right now.

Every day since March of this year, the U.S. has been releasing 1 MILLION barrels of oil from our strategic reserves into the open market.

To put that into perspective, that’s about one-third of the daily production of the oil-rich United Arab Emirates.

It’s a lot of oil. And it’s had the desired effect of making gas cheaper at the pump for millions of Americans.

But it’s got to stop eventually. It was only scheduled to run until the end of this month.

And that’s because there’s a limited amount of oil in the reserve. It’s not endless.

It’ll need to be refilled pretty soon because currently, it’s at its lowest level since 1984. 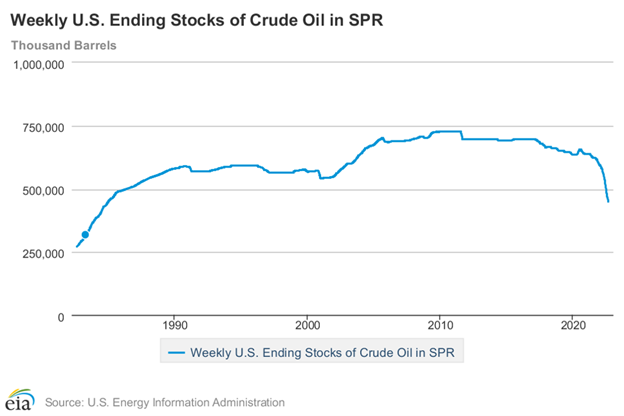 The U.S. government buying hundreds of millions of barrels on the open market is going to have one effect and one effect only: It will drive prices up.

So we can pretty much bet that we haven’t seen the peak in energy costs here in the U.S.

And we can be 100% sure it’ll get more expensive in Europe as winter rolls in and that Russian gas does not.

So there’s one argument for why it’ll be different this time out the window.

Then they tell me that the Federal Reserve has shown that it’ll “do what it takes” to rein in inflation.

But will it really? I mean, seriously…

These people all have their eyes on cushy jobs working for the Treasury Department (like Janet Yellen) or for political think tanks (like her predecessor, Ben Bernanke) or consulting for investment banks (like their predecessor, Alan Greenspan).

And they don’t want to kill their future job prospects by making life difficult for those bankers, politicians, or political donors.

So while they sound pretty serious and hawkish right now, I’m not sure I believe they’ll stick to their guns when the stock market’s down a full 40% or 50% from the peak.

I’m pretty sure they’ll go neutral then. And after a relief rally in the markets that ends in more pain, they’ll start lowering rates and easing financial conditions again.

Got to keep the future boss happy.

But even if they had the gall to stick to the plan and do what’s necessary to kill inflation, they couldn’t afford it.

They do it because they have to. It’s a law that came into effect after the 2008 banking crisis.

Now they’ve got to keep reserves on deposit at the Fed to make sure they can cover enough losses in the event that something like 2008 happens again.

And as with any bank account, they get paid interest on their deposits.

But now it’s up above 2.5%. And that adds up to hundreds of billions of dollars in interest due to be paid by the Fed.

Boost the fed funds rate and that interest rate goes up too.

Boost that interest too rate much and the Fed doesn’t have enough money to pay interest on those deposits.

So they’ll do their best but likely fail.

They’ll either lose their courage in the face of mounting losses and growing political pressure...

Or they’ll realize that they are having a hard time paying the bills and act to make their bills lower.

Unfortunately, that action will add fuel to the fire that’s driving our bills higher.

So there’s another “it’s different this time” argument we can leave by the wayside.

I’ve saved the dumbest argument for last, as you can see…

And that it's going to spend our way out of high inflation and slow growth.

Now, if we were just battling slow growth, I might be on board. Government spending can stimulate growth.

Thinking that more spending will solve the problem that overspending caused is just plain stupid.

And I know you’re not that dumb, because you’re reading Wealth Daily and not watching MSNBC.

So I’m not even going to waste your time explaining that one.

But let’s talk about price controls and punitive taxes…

Because they don’t work either.

Never in the history of taxation has a corporation not passed on new taxes to its customers.

Literally every time a corporation's costs increase, so do the prices we pay for its goods and services.

Period. Hard stop. Sure, it’s not right. But it is what it is, and that’s how it works.

But who pays it? You and I do, because companies can pass it on in the price of their items.

So don’t hold your breath for punitive profit taxes to put a lid on price increases. They’re more likely to make your prices go up than down.

Then we come to price caps. That’s literally when the government tells a company how much it can charge.

It’s the opposite of a free market. And while price caps do tend to hold prices down while in effect, as soon as they’re gone, prices tend to shoot up past where they’d have gotten on just inflationary pressures alone.

Nixon tried it back in the 1970s (so I guess the situation now is not that different if we’re hearing talk of them again).

But they failed miserably.

In 1971, Nixon imposed a 90-day freeze on wages and prices in order to counter inflation (which was then running at what seems today like a low 5.84%).

It was part of a policy shift that earned the moniker the "Nixon shock."

Yet here we are again with our esteemed leaders tossing the same ideas around.

Doesn’t sound very different to me.

So what’s an investor to do?

Well, one thing we can do is take a look back at the investments that succeeded during the 1970s…

Energy and commodities were good too…

Energy-related investments like Schlumberger (SLB) returned even better, clocking in at nearly 900%: 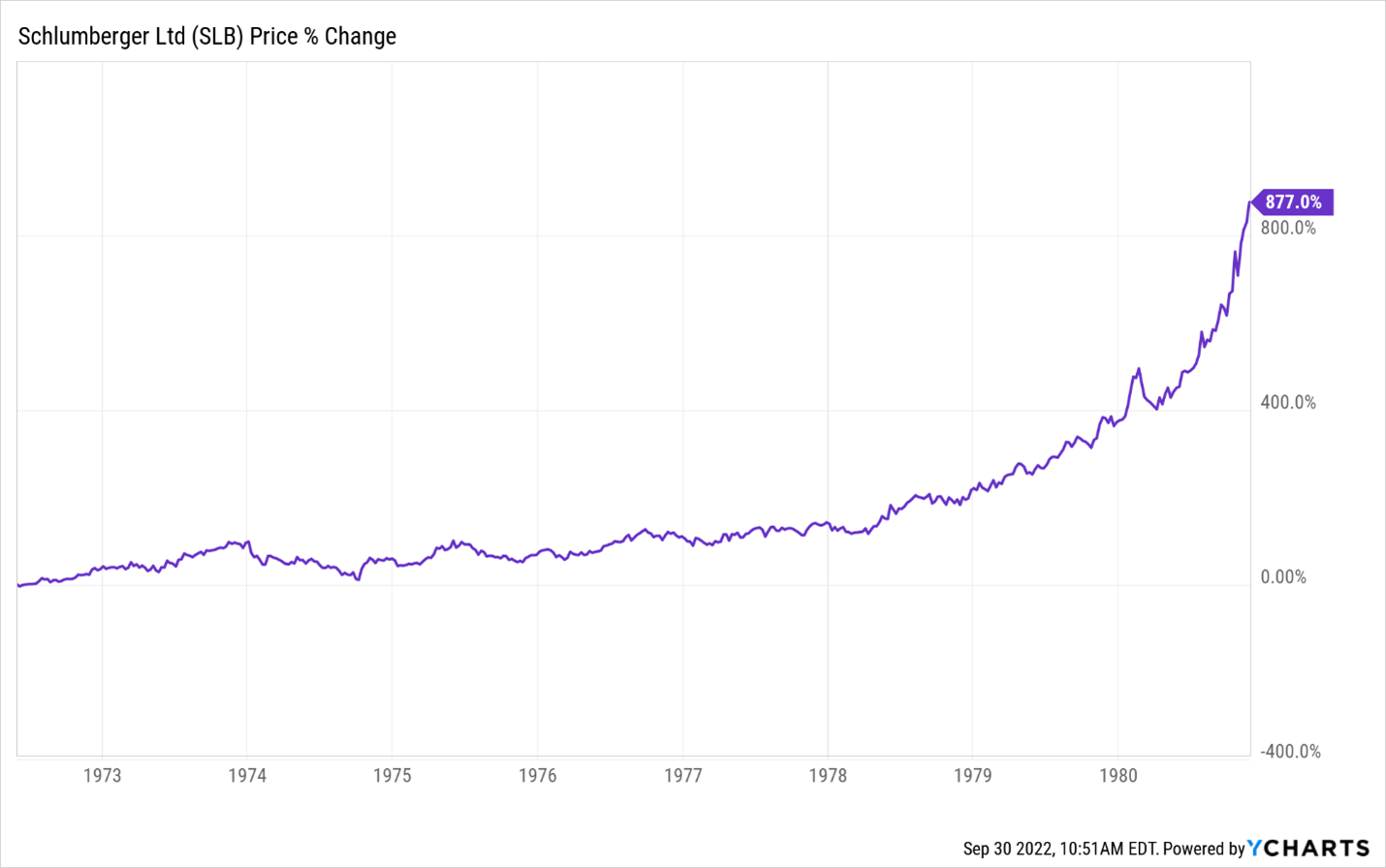 So there are reasons to expect that we’ll see something similar to what we saw in the 1970s.

But there are also ways to beat stagflation.

These are just a few of them...

But if you keep reading the commentary from me and my fellow authors here at Wealth Daily and our parent company, Angel Publishing, you’ll have access to all the best ways to beat the market and protect your portfolio from whatever comes our way.

So make sure you’re keeping an eye out for our next article. It’s sure to be a good one.