It’s All a Bunch of Bull$hit

Have you ever stepped back and taken a look at what’s going on around you and wondered, “Am I taking crazy pills?!”

I sure have. It’s been happening a lot this year — even more in the past few weeks.

Those of you who’ve been reading my articles for a while know I’m not one for swearing. My mom’s an Episcopal priest. I got my mouth washed out with soap a lot as a kid. And I try not to write anything that would make her want to break out the Dawn again. That would be really embarrassing at my age.

But when I get together with my friends, especially after a few adult libations, my swearing gets pretty casual. And since you’re my friends, today, while I haven’t had any drinks, I’ve got to let a few vulgarities fly as I call bull$hit on everything...

Remember a few weeks ago when the yield curve inverted? Remember all the so-called experts on TV and Twitter talking about the end of the world? Because one single technical signal can totally predict a catastrophe.

They were showing you charts that proved every time the curve inverted, a recession followed. Granted, they left out the parts of those charts where an inversion didn’t precede a recession. But who cares about the facts when you’re trying to get eyes on the screen?

What happened to all that?

Oh, that’s right. After inverting for all of a couple hours, it straightened out. And after stirring up fear of a market collapse for a few days, the “experts” got bored and moved on to the next buzzworthy headline.

Nothing really changed fundamentally. The recession they predicted just wasn’t happening immediately. And the average attention span isn’t that long.

So no more talk about how this single indicator is going to tank the market and erase a decade of profits. Not until it’ll get better ratings and more retweets, at least. That’s some bull$hit, if you ask me.

And so now it’s back to trade wars.

This Wednesday, President Trump used Twitter to let everyone know he’d be pushing back tariff increases to October 15.

The two-week delay was explained as a show of goodwill toward the Chinese government as it prepares to celebrate the 70th anniversary of the founding of the People’s Republic of China.

And markets loved the news. The Dow, S&P 500, and Nasdaq all closed up about 1% after being pretty much flat since last Thursday. 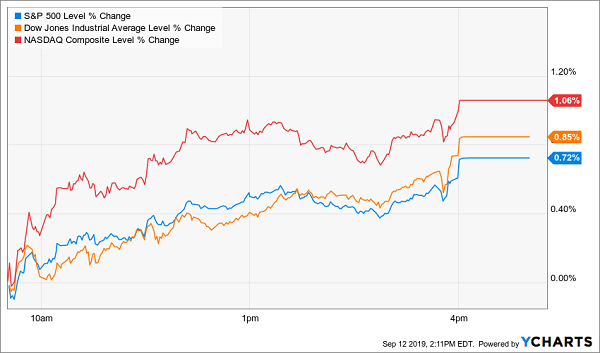 But what does two weeks really get us? Is it worth the gain we saw? Keep in mind he’s postponing a 5% increase on tariffs that already exists on $250 billion worth of Chinese imports. For 14 days.

That’s not really a huge deal. Especially when there are brand-new 15% tariffs on an additional $160 billion potentially coming before the end of the year.

But that’s not the extent of the bull$hit on this move. It’s what happened to the Russell 2000 index that should have you shaking your head and wondering about those crazy pills.

The Russell more than doubled the performance of the major indexes thanks to news that China-U.S. trade relations might be cooling off some. 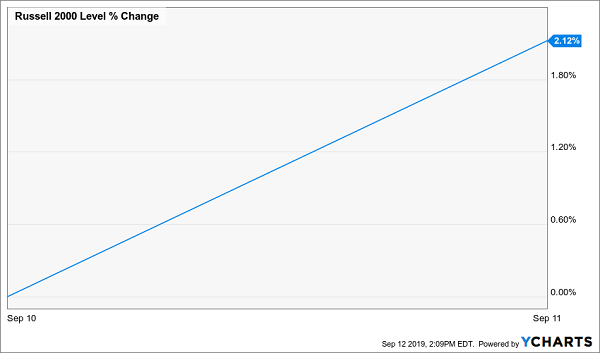 For those of you wondering why that’s the biggest load of bull$hit, let me explain the Russell 2000.

It’s what’s known as a U.S.-centric index. That means the majority of the companies represented are not affected by global trends. That’s what makes it a great barometer for the U.S. economy.

And that’s what makes it absolutely bat$hit insane that it jumped 2% on good news about trade with China. Trade with China doesn’t matter to those stocks, people!

So the trade wars with China are over after this “goodwill” gesture? The U.S. economy has been saved from the fiery hell it was headed for a few weeks ago? And the yield curve inversion is a distant memory?

I think I’m going to need my hip boots to wade through all this.

That Was Over Fast

And then yesterday (which is today while I’m writing), some “unnamed officials” from D.C. allegedly reported to some “news agency” that China and the U.S. were about to work out an “interim trade deal.” 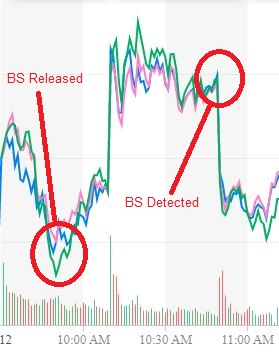 But that only lasted about an hour. Then it turned out the report from those “unnamed officials” was bull$hit, too. How many times has that happened this year? And yet we still fall for it. Absolute bull$hit.

The official word from the White House is that no deal has been reached, interim or otherwise. And the market immediately gave back those gains.

Now, markets are likely to recover some because the European Central Bank (ECB) announced a massive round of bond purchases (remember quantitative easing?). Free money and lots of it always makes the party better on Wall Street.

The ECB is also dropping its interest rate by another 10 basis points because that’s been working really well so far. Whether that’s more bull$hit or not, I’ll leave up to you.

How about Saudi Arabia selling its crown jewel? Yeah. The princes and kings are putting their most valuable asset — Saudi Aramco — up for sale.

So what makes everyone think they’d give up the source of their wealth to everyday folks like you and me?

They want to share the billions of dollars still hidden beneath their sands? They’re feeling generous? Or is it maybe because Aramco is past its prime?

I’d wager an educated guess it’s the third reason. The Saudis got filthy rich off oil. But they know that’s not the fuel of the future.

So they’re trying to sell Aramco while it’s at the very peak of its value. You know, buy low and sell high. 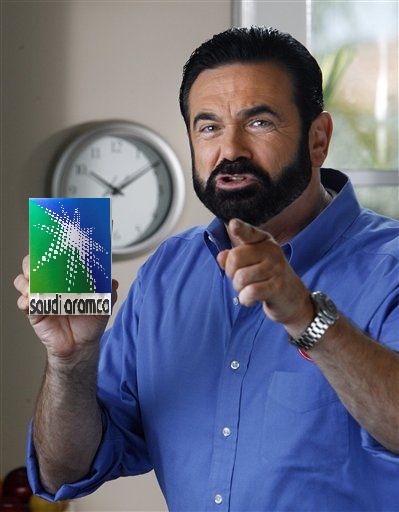 Which is why they’ve got some of the best pitchmen in the world working to drum up sales. They’ve hired the Billy Mays of investment banking to convince people that they’re not buying a dying pig, but in fact getting a thoroughbred colt.

And people seem to be buying it. How’s that for some bull$hit?

If you’ve been sitting there reading this and nodding in agreement or shaking your head in amazement, you’re probably happy to learn that you’re not alone. There are other people watching the same things as you and wondering if they’re crazy or if the rest of the world is.

A lot of them are here at Wealth Daily. And that’s why our readers are faring so much better than most investors. We strap on those hip boots and wade through all the bull$hit for you. And we deliver actionable advice.

We’re not the kind of researchers who’ll charge you thousands of dollars for a report that tells you something is “likely” to happen. I mean, I can tell you it’s likely to snow in Maryland this winter. But that’s not really helpful advice, is it?

And that’s why it’s so important that you come here for your investment research. You just can’t trust the people on Twitter who are cannabis experts one day and yield curve experts the next. And you certainly can’t trust the ones on TV just looking to boost ratings (and their bonuses).

But here at Wealth Daily, we don’t exist because we’ve inked multibillion-dollar corporate advertising contracts. Our success depends entirely on your success.

If we’re not giving you actionable advice and factual news coverage, you won’t want our advice anymore. And rightly so.

But if the guys on TV give you bad advice, they don’t care. They get paid by the companies paying to advertise. And those companies pay more to be on shows with higher ratings. Doesn’t matter if the people watching are winners or losers, just as long as they’re watching.

And if someone on Twitter (whose real name you don’t even know) costs you money with a bad call, what’s the worst that happens? People stop following, and they open a new anonymous account.

We're here no matter what happens. You know who we are. And we're in it for you, not for the fame and fortune.

So, to close things out today, how about some of that actionable advice?

It looks like cannabis stocks have hit a bottom after sliding much of the summer. And my partner and I have uncovered a cannabis company that’s poised to shoot higher as buyers return to that market.

It doesn’t matter how much the EU spends on its new QE. And it doesn’t matter what tweet disrupts the markets next. It just matters that Americans are certain to keep on toking up.

And I think we can all agree that’s not bull$hit.