It Is What It Is, but Not What They Say

What a week. What a couple of weeks, for that matter. Or maybe, what a year!

Because for over a year, I and my colleagues here at Wealth Daily’s parent company, Angel Publishing, have been shouting at the top of our lungs to watch out for inflation and a coming recession.

And now the chickens have come home to roost, as they say.

The Federal Reserve and the politicians in Washington waited too long to make a move and now they’re trapped between a rock and a hard place.

They’re still saying that a recession isn’t a given, but they’re about the only ones who still seem to feel that way.

The “Great Resignation” Just Got Laid Off

And I say that because of all the layoffs I’m hearing announced every day.

Just look at a screenshot I took the other day: 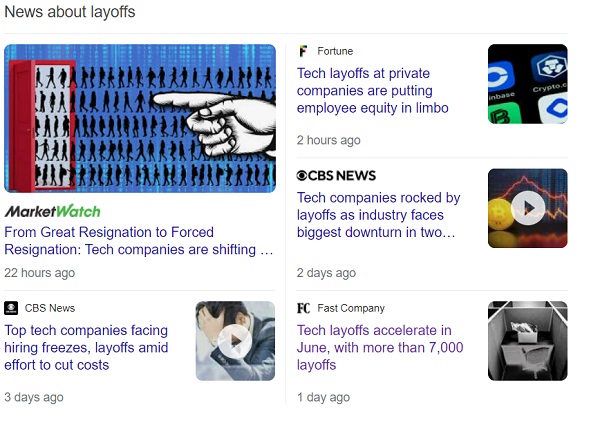 According to Fast Company, we saw 16,000 layoffs in tech-related jobs alone during May.

Coinbase recently announced it would be laying off 18% of its workforce. Security company OneTrust plans to cut 25% of its staff. Fashion company StitchFix announced plans to fire 15% of its employees...

The list goes on and on and on. And it’s going to get longer. Why?

Because the executives at those companies know what our politicians and central bankers refuse to admit: We’re heading for a recession (if we’re not already in one).

Why else would they be reducing their biggest expense unless they think tougher times are ahead?

And let’s be honest, all of the companies I just named were burning through way more cash than any successful business should.

And a recession is the time to cut literally all the fat from your company. Every employee MUST satisfy a critical role. Everyone must be making the company more profitable.

So it’s probably a good thing that these companies are cutting staff. In the long run, that is. And for investors.

It’s not so great for the thousands of folks who thought they had bargaining power because they’ve heard how tight the labor market is.

They’re about to find out just how much clout they really have.

Can’t Fix What You Can’t See

It’s definitely a scary situation for a lot of workers out there who aren’t sure if they’ll still have a job come Monday.

How are they going to help get us out of it?

They’re not. And that’s why I say that it is what it is, but that’s not what they’re telling you.

Fortunately, you get your information from more reliable sources than the lying politicians in D.C.

You get (at least some of) it from us. So you’ve been preparing for this worst-case scenario for over a year.

And you’re probably a whole lot better off than the average investor right now.

But just because you were prepared early doesn’t mean you can rest on your laurels now.

In fact, it means you need to be even more careful about where you’re putting your money now that you’ve protected it through the worst of the crash.

You don’t want all that hard work you put in to go to waste, washed down the drain by the drag of inflation.

And that’s why my colleagues and I are determined to help guide you through the worst of this market melee.

That’s why we’re committed to helping you find the best investments that will weather the storm and return tenfold on the other side.

And that’s why I want to share some research with you about an industry that’s getting destroyed in this crash but has a history of coming back VERY big.

It’s incredibly out of favor now, but that’s exactly when you want to be a buyer.

And history says that every time investors bucked the trend and bought while this industry was down, they made their money back hundreds of times over.

So don’t let the fear that’s permeating the market stop you from making the investments that will rewrite your future.

You’ll thank yourself a few years from now. I promise.