Is the Market Rally Over?

Is it just me? Is anyone else starting to think that the stock market has gone a little crazy... that maybe, just maybe, stock prices have gotten a little ahead of the fundamentals?

First-quarter earnings weren't that great. Sure, we got the usual 65–70% of companies on the S&P 500 beating expectations. But those expectations were lowered to the point that an elephant could have easily cleared the hurdle.

Of course, earnings are all about the future: If business is looking better down the road, then it's no problem for investors to shake off a bad quarter and buy ahead of better times...

So that's another problem. Second-quarter earnings aren't looking so hot, either. Research firm FactSet tells us that 112 companies on the S&P 500 have issued forward earnings guidance for the second quarter. Eighty-one of those companies have lowered their estimates... 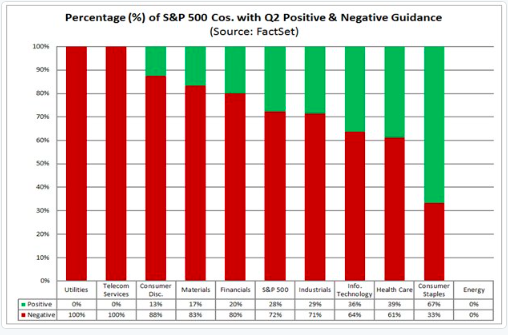 So again, maybe it's just me, but when 72% of the companies that offer forward earnings guidance are telling analysts that they should lower the expectations, well, that doesn't seem like an urgent call to run out and buy stocks.

After all, companies are lowering their guidance. And analysts are going to lower their estimates. That means the "E" part of the P/E ratio — earnings — will be lower, so the P/E ratio itself will be higher.

As it happens, this is typical behavior from the prognosticators. I'd have to take off my shoes to count the number of times I've heard them say, "Well, we expect that growth will improve in the second half of the year."

Sometimes it happens. Usually not. Most times, analysts are lowering their earnings estimates as quarterly reporting season approaches.

If you wonder why analysts and economists think the second half of 2016 will be better, well, I wonder the same thing. There's really not much evidence that the global economy is on the verge of some kind of growth spurt. Europe is a slow-motion disaster. Japan is a full-speed disaster. And who knows what the heck is going on with China...

Goldman Sachs just released a report suggesting that China has way more debt than it is reporting, saying, "The Chinese economy is so addicted to credit that any effort to tighten the money flow is likely to result in severe disruptions."

Of course, Goldman might be playing the China-economic-crash card for its own reasons. It's standard operating procedure for hedge fund guys to short Chinese stocks and then go on CNBC and tell anyone who will listen that China is on the verge of collapse.

The U.S. economy is muddling along. But that didn't stop the World Bank from cutting its global growth estimates from 2.9% to 2.4%, citing "stubbornly low commodity prices, sluggish demand in advanced economies, weak trade and diminishing capital flows."

That's not really what you want to hear if you're betting that earnings are going to improve enough to make stock prices look attractive. In fact, it's the opposite of that. But still, stock prices keep moving higher and higher...

The S&P 500 is now up 300 points from the February lows. That's a huge 16% gain, a couple years' worth of gains packed into about four months. The S&P 500 is now a stone's throw from all-time highs. That seems a little precarious to me.

The Fed and Oil

But the fact is, I can't help it. I have to try to understand just what the heck is going on, no matter how futile the attempt. And I gotta say, this attempt to understand the market is likely to prove futile...

Near as I can figure it, the stock market is roaring higher for two reasons: oil and the Fed. Of the two, oil is by far the more interesting (and potentially profitable) scenario.

Full-bore production from Saudi Arabia doesn't seem like a good setup for an oil rally, but that's what's happening. And for a few reasons. One, low prices have pushed demand higher, as they should.

Two, new oil production is not coming online. There's simply no economic reason for any oil company to spend money to develop existing fields or explore for new ones. This sets up a dangerous situation down the road, but for now, it's keeping total production fairly level.

Finally, oil production in Nigeria and Venezuela is falling because of the problems that low oil prices have created. Nigeria's economic downturn is fueling insurrection. And Venezuela reportedly can't afford to print money.

They say the cure for low oil prices is low oil prices. We're seeing that. As oil rallies, it means more money for oil producers. It also means better earnings for the S&P 500. It's no secret that oil companies have been a big drag on earnings...

Then there's the Fed. Janet Yellen wants to hike interest rates so bad she can taste it. She has openly said a rate hike is coming soon, either in June or July. That should be not-good news... as in, it should be bad news. I'm sure you remember what happened the last time they hiked rates in December.

I can't say whether Yellen will indeed hike rates or not. The market is clearly saying "not." Or at least, it's saying that if the Fed does hike rates soon, it will be the last one for a while. I can see why that realization would be good for a nice relief rally. But all-time highs? That seems a little far-fetched to me.