Is Netflix (NFLX) Stock About to Collapse?

Netflix soared to astronomical heights this decade as more and more consumers abandoned video stores for the convenience of online streaming.

Early investors who got in around the time the company went public in 2002 saw their shares rise as much as 33,760% by last July. 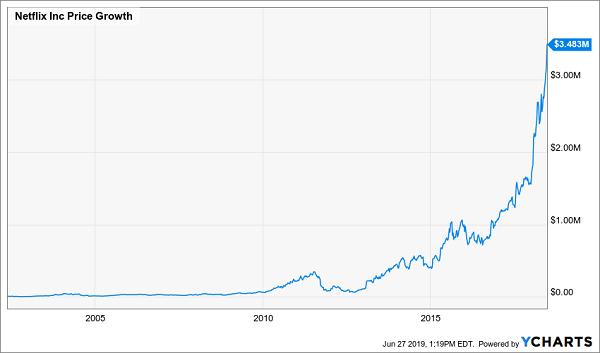 That’s certainly enough to pay off a house, take a lavish vacation, splurge on yourself and your family, and still have a comfortable retirement.

Even folks who didn’t see the writing on the wall that early made out like bandits. If you’d have signed up for Netflix back in 2009 and liked it enough to buy some shares, you’d still be sitting on over 6,000% gains.

But if you waited and want to invest now, I’ve got some bad news for you: Netflix isn’t going to ever deliver gains like that again.

And folks who buy the streaming giant now may even be looking at a pretty big loss as soon as next year...

The Office Is Closed

It may not seem like a big deal. You may not even know it happened. But Netflix just lost the rights to stream its most popular show.

NBC’s take on the British television comedy series The Office is no longer gracing the list of streaming options on Netflix.

Like I said, that might not seem so bad. But Netflix’s second most popular show is Friends. That’s also an NBC gem. And you’ve got to imagine the company is likely to pull it, too.

The titans of content — Comcast (owner of NBC), Disney, AT&T (owner of Time-Warner), etc. — finally realized a fact that could lead to the downfall of Netflix.

At first, it was Netflix’s platform that made it so valuable. It was the only way to get streaming video on demand whenever and wherever you wanted.

But that’s no longer the case. There’s a myriad of competing platforms now, and more are on the way.

But a lot of that content is owned by companies like Disney, AT&T, and Comcast. And when they pull it — which they will — Netflix will lose the only edge it has on its much larger competitors.

Disney is already starting to remove its content in preparation to launch its own streaming service. And after buying Fox and getting all that content, plus a bigger share in Hulu, it’s got even more muscle to flex.

Netflix’s only option is to keep creating original content that can compete with the likes of Disney’s Avengers and Comcast’s The Office.

But that’s expensive. And Netflix really can’t afford it.

When it Costs More Than it’s Worth

You see, Netflix did about $15 billion in revenue last year. But it spent over $13 billion on its search for original content.

That’s a pretty huge burn rate. And in order to keep its original content and revenue growing, the company has taken on a ton of debt. It’s pretty much the only reason there’s growth at all... 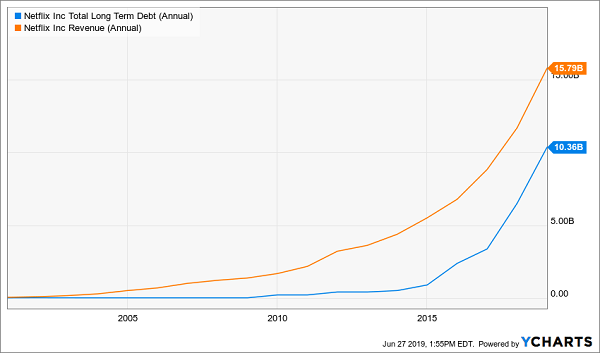 That’s only going to get worse as Netflix spends more and more to replace the content being pulled from its platform.

And if that wasn’t bad enough, the company is practically hemorrhaging cash. Last year, over $3 billion flowed right out Netflix’s doors.

The writing is on the wall for Netflix and its shareholders. The market may not have fully realized what is going to happen. But it’s a question of when the stock will fall now, not if.

Well, you know I’m not one for shorting stocks. Losses can be limitless on a short, and your gain is capped at 100%. And you only get that if the stock goes all the way to zero.

And in my opinion, there isn’t going to be one winner to this new streaming war.

Amazon has lots of money to grow its Prime offerings. Disney has some of the best content on the planet. Comcast and AT&T are IP powerhouses, too.

And all of them have more money and better balance sheets than Netflix.

So, yes, I’d recommend an investment in Disney or Amazon. But no, I don’t see them delivering the kinds of gains Netflix stock got famous for.

But I do see another company that looks very much like Netflix did back in the early 2000s. It’s got more active users than Netflix ever did at that stage. And it’s finally gotten big enough to start scaling and growing faster than Netflix ever has.

Plus, with its massive user base, it’s got leverage over the content producers. It’s like Netflix at the start — if you want your content in front of customers, you’ve got to have your content on this company’s platform.

And it’s poised to deliver the kinds of gains early investors in Netflix are still living large on.

In fact, next month, the company is going to make an announcement that’s almost sure to send shares skyward.

You might be wondering how I know when this announcement is going to come. Well, I’ll tell you.

A Netflix insider recently jumped ship to join this company before it really gets massive. He saw that Netflix had outlived its glory days. And he’s going all in on this up-and-comer.

I’ve been watching this titan of business for a while. It was his game plan that helped drive Netflix to the top of its industry. And now, he’s using that same plan to send this company’s stock even higher.

Netflix got its start here in the U.S. But it was international markets that really fueled its expansion.

And on July 26, this company is going to make an announcement about a frontier market it’s already in the process of cornering thanks to this former Netflix exec’s skill set.

And thanks to my stalker-like curiosity about his career, you’ve got the chance to invest before the rest of the market hears what he’s got to say. And you’re going to be able to cash in on the rally that’s sure to follow.

I’ve compiled all the information you need to get yourself invested in the Next Netflix and ready to cash in as it dominates this $6.2 TRILLION industry in a comprehensive, easy-to-digest report.

Just click this link and you’ll get everything you need to start growing your wealth the way early Netflix investors did.

But remember, you’ve got to act quickly. The announcement will become public information in less than a full month. And once it’s out there, the stock is likely to start shooting up.

As with Netflix, you’ve got to get in before the growth if you want to get out with a massive profit.

So don’t delay. Click here now and get access to the Next Netflix and all the life-changing profits that are coming with it.