Is It Too Late for Legal Cannabis?

For the past three months, I’ve been using my weekly column here at Wealth Daily to impress upon you the immense profit opportunities in the legal cannabis market.

I’ve told you about politicians — even President Trump himself — who’ve changed their stance and now support federal legalization.

You’ve heard about the massive gains investors have already made. And you’ve watched as more and more major American companies make billion-dollar bets on the industry.

But the time for you to become an early investor and make the really massive gains is ending. And it’s ending very quickly.

After Constellation announced a $4 billion increase in its cannabis investment, pot stocks went through the roof.

The growers were the focus. And the three that trade on U.S. exchanges saw most of the action.

Investors got excited by the scent of profits in the water and started driving the share price higher and higher. It was a true feeding frenzy.

And it lasted all month.

The story is the same for both Cronos and Tilray, the other U.S.-listed growers. 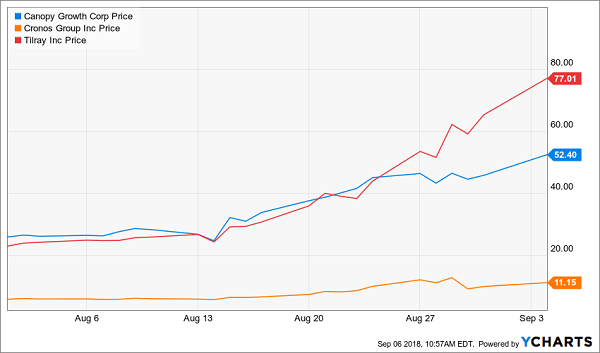 Those are massive gains any way you slice it. But to get that in a month... Just wow!

Cronos ended the month up 93%. Canopy shareholders saw a gain of 103%. And Tilray’s early investors got a one-month gain of 236%! 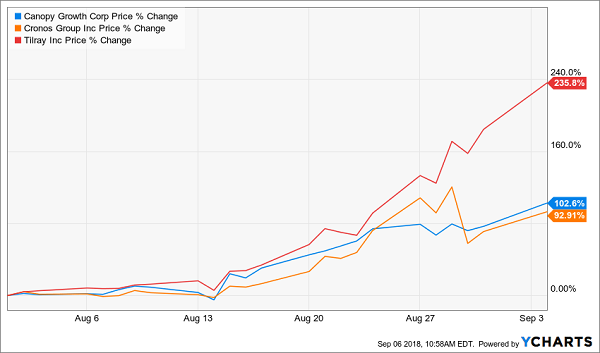 How’s that for phenomenal profit potential?

But you see, a lot of that increase — in fact, most of it — came from pure speculation.

Canopy just got a massive influx of cash from Constellation. And Constellation has the option to invest another $4.5 billion. That would give it about 51% of the common shares of the company. And it would be the majority owner.

Canopy’s price jumped on the news. But it kept climbing because of speculation that Constellation would exercise warrants and perhaps invest even more.

The other two U.S.-listed growers, Cronos and Tilray, well, they went crazy because there are other massive brewers out there who aren’t going to let Constellation have a monopoly on the cannabis beverage industry.

Diageo is one. It’s currently courting a handful of growers. And it will partner with one of them. But nobody knows who’s on the short list. So the available stocks are all getting driven higher.

Molson Coors is another. It just partnered with a small, Canadian-listed company, Hydropothecary, to develop beverages.

But that was a small investment, and more could be on the way from Molson Coors, too.

So investors are betting on which will be the next company to get a massive infusion of cash from a major international operation.

And if you don’t believe me, just look at the charts for Canopy, Cronos, and Tilray for the entire year before Constellation announced its investment last month... 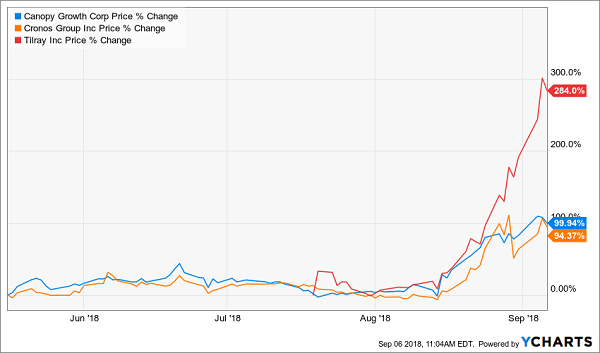 Notice anything interesting? Yep, all of the gains happened in one month.

Before that, all three companies were just bouncing around.

So yes, the gamble paid off in this case. But will it pay off again? And will you be able to guess which company will get the rose and which will get the boot?

Even more importantly, are you willing to bet your hard-earned money on that?

I’m not. At least I’m not willing to bet more than I’m willing to lose.

That’s why I don’t hold any of those companies in my retirement account. They’re speculations. And I need that money to support my family and me through my golden years.

I’m not gambling it on a possibility. That money goes into sure things.

Now, to be clear, I do have investments in Cronos and Canopy. But they’re in my speculative account. I invested as much as I was willing to lose. And if I’ve got some extra cash after bills and IRA contributions, I might add a few more shares.

And to be honest, I do have cannabis stocks in my IRA. But not the growers. Like I said, I want to put that money to work on a sure thing.

I know what you’re thinking. But I’m going to show you why that’s not a contradiction.

You see, I’m a believer that the best investments are the kind you can buy and forget about for months, even years at a time. Then when you come back to check you’re pleasantly surprised at how much money they’ve made you.

So, I invest in companies that will stand the test of time. Maybe they’re just that good. Maybe they’re in an industry that’s projected to keep growing for decades. Or maybe they’re at the forefront of an entirely new technology.

Whatever the catalyst is, it has to be a lasting one. I don’t want a flame that’s going to burn really bright but use up its fuel too fast. I want one that’s going to flare up from time to time but keep steadily burning forever.

And that’s what the growing legal cannabis market is here in the U.S. It’s a catalyst. It’s a massive one. And it’s extremely long term.

But the companies in the industry now may not be here in five, 10, 20, 30 years. And I want investments that are going to be around even after I’m “done” with my retirement.

Some of these companies are growers whose operations have grown too fast. Some are selling a product that’s about to flood the market and drive prices down. Some just don’t add any value to the industry.

But there’s one particular company that will last as long as the industry does.

Except that it has a monopoly on two resources every single cannabis company needs, two resources the industry itself can’t survive without.

But what's perhaps the best thing about this company is that it’s already got a special deal with the U.S. government. And that deal means it doesn’t even matter how high the taxes on legal cannabis operations end up being.

No, that's not the next cryptocurrency sensation. “Cannabis cash” is what this company's shareholders are collecting every day.

You see, as long as this company pays the majority of its pot-related profits to investors, it gets special tax treatment that other companies in the industry won’t.

Not a bad deal for the company, right? Well, it’s an even better deal for investors.

And that’s because this company has been bringing in more and more pot profits every quarter since it went public.

And unlike those speculations I showed you earlier, it’s maintained an upward trend the whole time (with a few flare-ups here and there). 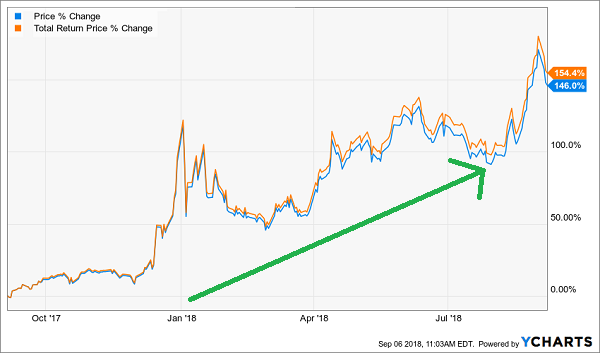 That 8.4% difference? It’s the share of profits — the "cannabis cash" — the company has to give out to stay in compliance with the government.

Think about that for a minute. Over one year, this company gave investors an extra 8.4% in profit. That’s about half the gain for the S&P 500 last year. And it’s about the average yearly gain for that index over the long term.

Plus, investors saw their shares double in value and keep growing. And they didn’t have to wait out a really long, flat stretch like those gamblers did with the growers.

And that’s why I’m writing one more time about the benefits of getting invested in cannabis now.

And why I’m giving you another chance to learn all about this “sure thing” I’m so happy to have in my retirement account.

But you have to act soon. Next month we’ll likely see another big rally as Canada’s recreational industry comes online.

Then we’ll be on our way towards legalization here in the U.S. And all of the truly massive share price gains will be gone.

Getting yourself invested now sets you up to ride every single rally on the short path left toward U.S. legalization.

And investing in this company protects you from the wild swings and imminent declines of those gambler stocks.

So don’t delay. View this presentation to learn everything you need to know to get invested today.

Or, if you prefer to read about this amazing opportunity, click here and you’ll be directed to a written report detailing everything.

Whatever you do, don’t wait another second, let alone another day.

You’ve already seen how fast these stocks can move. Every second could cost you millions in the end.

So act now, and set yourself up for the best future.

To your wealth (and acuity),