Is Boeing’s Stock Fiery Wreckage or a Phoenix Rising?

In case you missed it, Boeing had a tough weekend.

Another 737 MAX 8 class jet crashed. And people are speculating that a faulty pilot assistance system is the cause.

This wouldn’t be a major issue for the company if this had been the first crash. But last October, a first 737 MAX 8 crashed into the Java Sea.

After an investigation, it turns out that a faulty sensor was to blame. And Boeing knew about the issue before the crash.

In order to make the jet more fuel-efficient and extend its range, the company adjusted the wings in relation to the body. But that adjustment caused an issue during takeoff.

The nose of the plane would pull up too high, too fast. And that could cause the plane to stall at a critical point.

So, Boeing came up with a pilot assistance measure to correct this and force the nose back down. The company insists that it provided proper guidance on the system to pilots.

But some pilots are still having issues with the system. And Boeing is going to have to fix it. That’s not a question. The question is why haven’t they fixed it already.

The cause of the second crash hasn’t yet been determined. And it might not be the same faulty sensor. But that’s beside the point.

And now, pretty much every country but Canada and the U.S. have grounded all 737 MAX 8 aircraft.

So, Boeing is facing a major PR nightmare. And it’s definitely going to have to fix that sensor.

That’s going to cost money. But just how much is open to debate.

The Last Time This Happened…

This isn’t the first time Boeing has had an issue with one of its aircraft lines.

In fact, when the 787 Dreamliner first debuted back in 2013, the planes suffered major electronic issues thanks to faulty batteries and charging systems. Several caught fire with passengers on board.

The entire fleet was grounded for three months. And Boeing even picked up the tab for some carriers that had to lease replacements while the 787s were out of commission. Plus, there were lawsuits aplenty.

And the stock price took a pretty big hit because of all that.

The market cap dropped around $5 billion in a matter of days.

But the costs were limited. The repairs cost about $465,000 per plane. The lease payments were the most expensive part. And they top out at around $1 million a month for even the biggest, most fancy jetliners.

You take those costs, multiply by the number of planes out there, add a bit for the lawsuits, and you’ve got your total.

And it turns out the drop in share price was far greater than the negative impact on the company. Since that debacle, which killed the company in the eyes of many investors, Boeing’s doubled its share price nearly six times over: 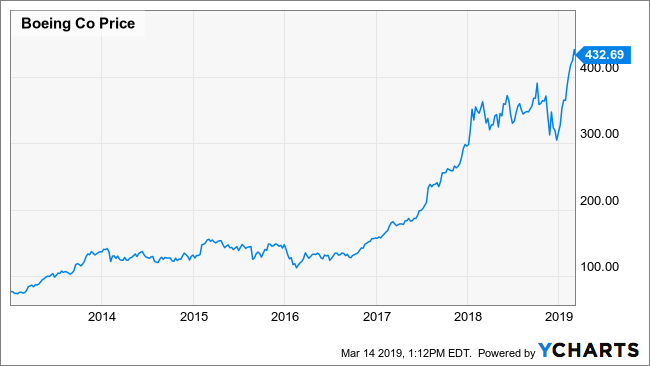 The 787 fiasco was just a blip on the radar.

Boeing sells a lot more 737s — they account for the majority of the company’s 5,900-order backlog. But this is still going to be just another buying opportunity in the history of Boeing stock.

The Business Side of Things

Now, obviously, from a human standpoint, this is appalling. But we need to look at it from a business standpoint. And we need to ask how expensive appalling is in this circumstance.

Well, fortunately, we’ve got a similar example with the same company we can use for reference. And, while there are some unknowable figures, most of them are pretty easy to estimate.

So, how much is this going to cost Boeing? Lots of folks have been quoting Jefferies analysts' number of $5.1 billion. I’ve seen the number, but I’ve yet to find the analyst report that details how it was calculated.

And I disagree. I see this costing Boeing far less. My estimate is in the $2 billion–$3 billion range at the absolute most. I can honestly see it costing a whole lot less than that, too.

And I’ll tell you how I got there…

How’s That Add Up?

One cost I’m not factoring in is future 737 MAX 8 deliveries. It’s Boeing’s most popular model. And there are tons of orders that can’t be shipped until this is sorted out.

But I’m not including them because any repair will be worked into their assembly process. And none of the countries or airlines that’ve grounded the planes have reduced or canceled their current orders.

But like I said, there are costs here that are easy to estimate: Repair costs and leasing costs are the two most concrete. So, we’ll start there.

We’ll use the high end to keep our estimate as negative as possible. That’s $350,000 multiplied by 350 aircraft in operation.

That works out to $127.75 million per month if Boeing covers the lease of a similar model aircraft for the carriers.

Now we start to get into the trickier numbers. How long would it take Boeing to repair all 350 planes and get them back in the air?

Well, there were about 50 787s needing repairs, and they were grounded for three months. That’s how long it took Boeing to figure out the problem, design a solution, and implement it on every plane.

If the company could do the same feat this time, but with seven times the number of planes that would be amazing. And it would bring total leasing costs for 350 substitute planes to $696 million.

But I don’t know if Boeing could get it done that fast. So, I calculated another number — far more negative.

Since there are seven times more 737 MAX 8s than there were 787 Dreamliners, let’s imagine it takes Boeing 21 months to fix every plane out there.

And the company has to pay the lease on 350 substitute planes for the whole time. That still only works out to $2.996 billion.

What about the lawsuit settlements? Well, that’s another very complicated assumption. But to make it easier, I checked airline settlements in the U.S.

Those only come in around $4.3 million on average, and the U.S. has the highest global average. I wanted a worse figure, something really damaging for Boeing.

So, I found the highest settlement amount in airline history. It was a combined settlement where two airlines paid about $150 million — biggest ever.

I added that to my calculations and voilà. I had a final number.

And I had a really good case for buying Boeing stock on the drop.

How Is This Possibly Good?

If Boeing pays a settlement equal to the highest in airline history — $150 million — and it takes a full 21 months of grounded 737s to get it fixed, you’re talking about a total cost around $3.31 billion.

If it only takes three months to get the planes back in the air, that brings our total down to just over $1 billion.

And right now, only about 118 of the 350 planes are even grounded. That’s most of the global fleet. But two-thirds of the 737 MAX 8s operate in the U.S. And the FAA says they’re safe to fly.

So, there’s even a possibility Boeing gets out of this without spending anything but maybe a few hundred million on repairs.

Heck, even if it costs the lofty $5.1 billion Jefferies says it will…

That’s a far cry from the nearly $25 billion investors axed off the market cap this week. 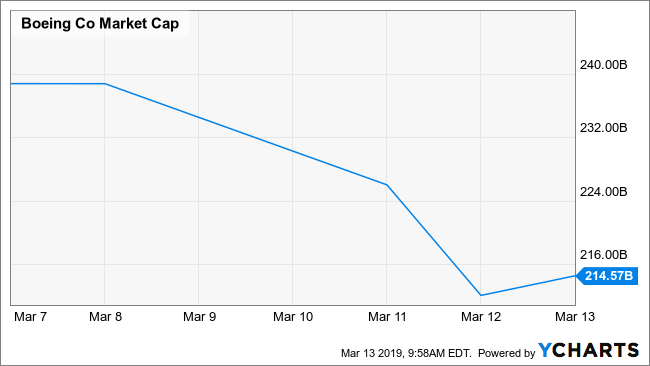 The bottom line is Boeing lost $24.75 billion in value for an issue that’s going to cost it $5.1 billion at most (and potentially less than $1 billion) to fix. There’s at least a $20 billion in overreaction baked into the shares.

I recommend buying low so you can collect part of that money when it comes flying back in later this year.

After the Trade Deal
The U.S./China trade deal is a done deal. I'm sure there are still things that need to get worked out. But the U.S. trade delegation isn't walking away from this table... So here's what to expect.
Levi's Is Getting Closer to Going Public
The 166-year-old denim and retail giant Levi Strauss is expecting to make its second public debut on Thursday, March 21. Wealth Daily editor Monica Savaglia has the details...
The Amazon Problem
While retail stores begin to focus more on e-commerce, Amazon is doing the opposite and getting further into brick and mortar. How should investors approach this? Briton Ryle explains...
Buffett's Envy: 50% Annual Returns, Guaranteed
Warren Buffett once told investors at an annual shareholder meeting, "...it's a huge structural advantage not to have a lot of money. I think I could make you 50% a year on $1 million. No, I know I could. I guarantee that."