Will the Dinar be Revaluated?

For a nation that has only recently come out of decades of dictatorship, war, and mismanagement, Iraq’s currency—the dinar—has been remarkably stable.

Perhaps too stable. Something is going on with the Iraqi dinar. 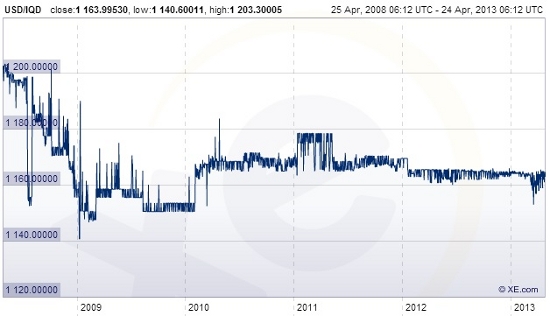 After a gradual strengthening from 2007 to 2009, the Iraqi government decided it wanted a weaker dinar in early 2010, and the currency has remained remarkably stable ever since.

A couple of months ago, however, the currency abruptly strengthened against the USD, as can be seen by the sharp drop at the far right. Immediately, the Central Bank of Iraq scrambled to weaken the dinar back to 2012 target levels.

Why? Isn’t it supposed to keep strengthening? After all, Iraq has the world’s second largest oil reserves. What ever happened to that highly anticipated revaluation? Is the CBI deliberately weakening its own money?

One short sentence answers all these questions: the Central Bank of Iraq regulates the flow of money through controlled auctions. 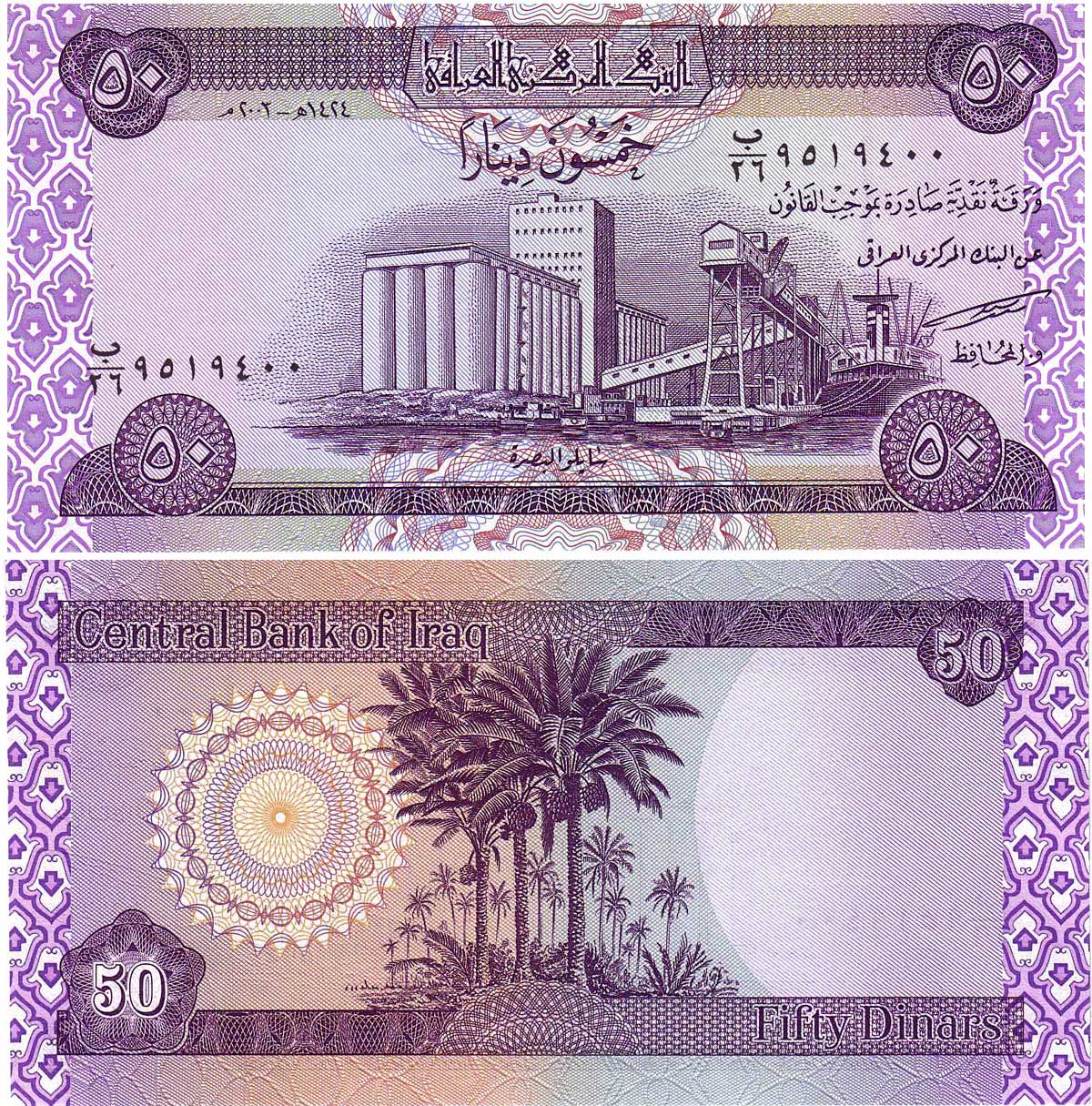 Needless to say, this is not normal. In most other countries, money can be easily exchanged into a number of currencies at the will and whim of any citizen. The exchange rates are allowed to move freely according to the forces of supply and demand, interest rates, etc.

According to Middle East e-paper Al-Monitor:

“Every day since 2004, the CBI has held an auction through which hard currency is sold to banks, companies and traders in exchange for evidence of import and transaction receipts. The auctions aim to prevent market speculation and stabilize the exchange rate of Iraqi dinars to the US dollar.”

The purpose of these auctions is to control the IQD:USD exchange rate by controlling the amount of USD circulating in Iraq. At these auctions, USD is issued exclusively to banks, companies and traders for the purpose of conducting business transactions with foreign entities (ie: importers, securities traders, banks, etc).

By controlling the amount of USD available in Iraq, the Iraqi government controls the value of the USD relative to its own currency, thereby stabilizing the dinar. It is as close as you can get to an outright currency peg.

Cracking Down on Auction Abuses

Things were going really great for years, until evidence turned up that some buyers at these auctions were falsifying their transaction receipts, enabling them to purchase more USD than their business activity legitimately entitled them to have.

The government believes much of the excess dollars purchased were smuggled across the border into Iran, which has a shortage of hard international currency due to sanctions. Money laundering and black market demand account for the remainder of auction abuses.

When it came to light earlier this year that more USD had made it into circulation than was officially thought, the value of the USD relative to the dinar abruptly dropped and the dinar rose. The supply/demand ratio dictates that the more supply you have of something, the cheaper its value. More USD in circulation than previously thought meant a cheaper USD, which meant a stronger dinar. Hence the sudden inverted spike at the right of the chart.

“The CBI prohibited any bank or company with capital of less than $400,000 from taking part in the currency auction. Additionally, all participants had to submit their [transaction receipts] to the criminal division in the Ministry of Interior, the economic crime unit and the money-laundering division of the CBI for approval.”

Reducing the number of buyers at the auctions meant reducing the amount of USD making it into circulation, strengthening the USD relative to the Iraqi dinar, and weakening the dinar back to that desired 2012 target level.

Iraqi parliament’s Amin Abbas stressed to Al-Monitor that the CBI must take “full responsibility for the fall of the … Iraqi dinar … because of its restrictive measures in granting permits to exchange companies.” And Mohammed Khalil, an official on Iraq’s Economic and Investment Committee, accused the CBI of deliberately “hinder[ing] the flow of US dollars into the market.”

Others are pinning the blame on Iraqi banks, as Al-Monitor informs:

And Iranian involvement is still suspected by Ahmed al-Alwani, head of the Iraqi parliament’s economic committee, who believes Iran is supplying Iraqi partners with false trade receipts in order to obtain USD from the auctions.

But Ahmed Bureihi, a former senior official at the CBI, denied such accusations. “Iran has nothing to do with the increased exchange rate,” he told Al-Monitor. “The CBI sells foreign currency to Iraqi customers to be used in funding trade transactions outside the country.” “There are Iraqi traders who defraud the CBI and provide counterfeit documents of virtual imports to Iraq. However … this has nothing to do with political issues.”

For its part, the government has a simple explanation for the dinar’s weaker value back to 2012 levels: the country spent it down.

“A former senior official at the CBI [Bureihi] said the rise is linked to increased government revenue from oil sales, leading to an increase in government spending,” Al-Monitor explains.

On the dinar’s side of that equation, as more oil is exported, more revenue is generated, and the nation becomes wealthier “per capita”. Enabled by this increased wealth, the government starts funding sorely needed rebuilding and expansion projects on infrastructure, energy, education, health care, and industry. In so doing, it pumps more of its local currency into circulation, which in turn weakens it.

This is a valid explanation for the stronger USD and weaker IQD. However, what the CBI is reluctant to admit is that apart from these increased oil revenues, the government is controlling the dinar’s exchange rate by controlling the amount of USD in circulation via its daily auctions.

It will only let into the economy the same amount of USD that is leaving the country. “X-amount” pumped in equals “X-amount” wired out. The balance of USD in circulation stays unchanged, and thus the exchange rate stays the same.

(Actually, the CBI does have to pump in very slightly more USD than is going out of the country in order to apply upward lift to the dinar as a counter to the downward push on the dinar exerted by the increased spending described earlier. Spending pushes the dinar down, USD auctions lift the dinar up, cancelling each other out to keep the exchange rate flat and steady.)

What About the Revaluation?

But what ever happened to that dinar revaluation everyone has been expecting? Even I wrote about it a couple months back (Dinar Speculation).

All over the web you will find plenty of investors who expect the Iraqi government will be forced to revalue its currency upward. Iraq has the world’s second largest oil reserves, and it is rapidly increasing its production and exports. The International Energy Agency recently projected Iraq's oil output to more than double in the next decade.

So the revenue is there. Unfortunately, so is the spending. Remember, Iraq is still rebuilding from decades of dictatorship, war, and mismanagement. The economy is in shambles, and social services are appalling. Any money coming in through oil exports is quickly being spent on reconstruction and industry, not to mention its debt burden.

This is why the CBI is going to such great lengths to control the amount of USD in circulation through auctions. It wants to keep the dinar cheap. Not too cheap so as to introduce hyper inflation. But cheap enough to maximize the value of its export income and get as much construction and labor for its money as it can.

What if it takes another 5 or 10 years for that revaluation to come? Might there be better returns elsewhere? Investors have to weigh the pros and cons and make their own investment choices.

If one still believes the global economy will once again run full steam ahead, then metals such as copper, iron, and steel will be in great demand, as will lumber.

If one still believes the global credit crises are not over, then precious metals will also be in demand, such as gold and silver. Who knows, perhaps this recent pull-back is a good entry point; no one knows for sure.

And there is always the stock market, which is remarkably resilient given the Federal Reserve’s easy money policy. Wealth Daily provides valuable trading information to help you make the right choices for you.

Perhaps the most crucial variable in any investment formula is time. You can have a sure-fire bet in a stock, gold, or even the Iraqi dinar. But how much time will you be waiting for it to pay off? Could you score better returns elsewhere over that same period of time?