Corruption in the Central Bank

An update from the Council on Foreign Relations mentions a report from the Office of the Inspector General for Iraq Reconstruction, Learning from Iraq: A Final Report from the Special Inspector General for Iraq Reconstruction. The report asks a simple question: whatever happened to all the billions of dollars that were invested in efforts to rebuild and restore Iraq’s economic infrastructures?

Corruption, in short, is the answer proposed. Corruption, which was deeply ingrained in Iraqi society under Saddam Hussein, continues to exert a powerful force. If anything, it grew sharply after 2003, and between 2004 and 2007, some $18 billion in costs could be attributed to corruption alone. It appears one audit indicated that nearly $40 billion could be leaving Iraq each year as a result of regular money laundering at Iraq’s Central Bank currency auctions.

All of this is in spite of the U.S.’s good-faith efforts to nip corruption at the bud in Iraq. By late 2012, the U.S. had invested a little over a billion dollars to implement rule-of-law initiatives. Of that, around $60 million was applied directly to anti-corruption measures. 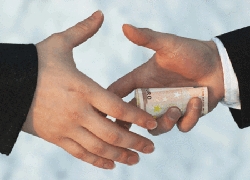 However, that does not appear to have done much. For example, the U.S.-implemented Commission on Public Integrity had over 500 cases on its portfolio within a year and a half of its establishment, but achieved barely an 8 percent rate of conviction between 2004 and 2007. More importantly, 31 of its members were assassinated over that timeframe.

According to the report, 40 percent of U.S. construction efforts in Iraq, worth around $2.1 billion overall, are riddled with “major deficiencies.” Among the problems indicated are contractors and subcontractors receiving exorbitant sums, lack of coordination between the U.S. and Iraqi governments, widespread corruption on both sides and lack of attention to that, and so on.

One particularly glaring example was a police program set up by the U.S. that was far more expansive than what Iraq wanted. This lead to a wasted $200 million out of more than $1 billion in initial expenses. Overall, the report indicates that of the total $60 billion spent so far on Iraqi reconstruction, at least $8 billion was wasted.

But there is some hope to be had from Iraq on this count. Al-Monitor reports that Ahmed al-Alwani, the Sunni politician, has attracted much attention for his initiatives against corruption in the Iraqi government.

Alwani presides over the Economic Commission in Iraq’s parliament, and he appears to be a staunch supporter of autonomy for the Anbar province. That movement began as a protest some two months ago and has since spread throughout Iraq’s Sunni areas, in opposition of Prime Minister Nouri al-Malik’s policies. Things got a bit serious when the protests resulted in a sit-in on the international highway connecting Iraq to Syria and Jordan.

Anbar is a region of some note; it is majority Sunni and one of Iraq’s largest provinces, bordering Syria, Jordan, and Saudi Arabia and containing one of the largest undeveloped gas fields in the whole country, as Al-Monitor reports.

But it is for his actions against corruption that Alwani has gained public attention. Back in October last year, the government issued a warrant against Sinan Shabibi, chief of the Central Bank at that time. The head of Iraq’s Board of Supreme Audit, Abdul Basit Turki, was appointed to act as governor of the Central Bank. However, the BSA, Iraq’s highest fiscal regulatory board, is an independent authority and, according to the constitution, should be under parliamentary control.

Alwani claimed that his committee appropriately investigated the charges against Shabibi and found malpractices which were not related to Shabibi.

Alwani said that “Shabibi was not involved in the violations detected by our committee, but there was negligence in pursuing fraudulent documents that were used to withdraw millions of dollars from bank auctions via private banks. Some banks were buying from bank auctions amounts that exceeded their capital, which is a clear violation that the Public Integrity Commission should investigate.”

However, Alwani and his group claim that the deposing of Shabibi was a blatant effort by the Iraqi government to impose its control over the Central Bank, thus wresting it away from parliament.

It’s through such moves that Alwani has made his name as a politician who opposes corrupt practices common throughout Iraq’s economic structure, but it remains to be seen what the long-term impact will be.