The Opportunity of a Lifetime

The single most critical factor that will likely be the key driver to sending the price of gold to the moon is being overlooked by most investors. That factor...

The gold and precious metal markets are tiny compared to others like the FOREX markets.

And at the end of the day, it means in the event of manic speculative buying, physical gold bullion may actually become unavailable!

Currently there are approximately 6.4 billion ounces of gold above ground. That's basically all the gold ever mined. Most of that gold exists in the form of jewelry, which is not typically made in a standard purity or weight that would be easy to trade.

The World Gold Council figures only about 40% of all the gold demand last year came from investors. So let's estimate that less than 40% of all the aboveground gold is minted in a standard investment purity or denomination that would actually be tradable. 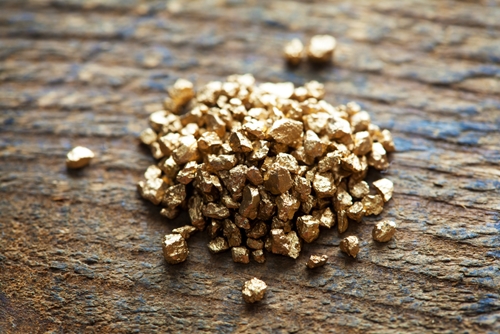 It's at that point where trillions of dollars could come crashing into the gold mining markets. There simply will be no other place to put precious metal investment money.

The precursor to this tidal wave of money into the gold and precious metal equity sector will be clear...

The moment the waters recede from the coastline will be when the gold ETFs announce they'll no longer be able to purchase enough physical gold to keep up with demand. One week later, gold stocks will be long past their 52-week highs — whatever they may be at that point.

There are two sides of the gold equity markets that I believe will perform the best:

Mid-tier gold producers will also do well. In fact, I believe all gold- or precious metal-related equities will continue to do well going forward. But I expect the biggest gains to ultimately have been realized in these two extremes of the gold equity market.

Now, finding those very large international gold producers to invest in is very easy work. It's simply a matter of looking at market caps. But finding very small exploration and development gold companies with quality assets is a major hassle. Trust me, I've made an entire career out of it.

Many of these junior mining companies have projects that will never produce a single ounce of gold. Others are flat-out marketing scams. So knowing exactly which junior mining stocks to most leverage gold mania speculation is extremely important.

To that end, there are several strategies to investing in junior mining stocks you can use to maximize your profit. And I want to go through a very simple one with you today...

There's an old saying among gold exploration geologists that goes something like this...

The best place to find gold is where someone else already found it.

Without getting too much into the geology of it all, gold deposits are generally created by volcanic forces and are often found to exist along a geologic trend. So there's a much greater chance of finding a new gold deposit on the same trend of a proven gold deposit that's already been discovered.

One of the most interesting junior mining area plays is covered by Alex Koyfman in his Penny Stock Millionaire advisory service. Just one week ago, Alex discovered a micro-cap $4 million company with a $0.06 stock that's positioned right next to one of the top-five largest gold mines in the world.

This gold mine holds over 2,000,000 ounces of gold reserves! It currently produces nearly a million ounces of gold per year. And it's one of the lowest-cost mines to produce gold in the world.

If Alex's new $4 million exploration company discovers anything of significance, share prices will explode. Even a small proven discovery could launch this company's market cap to $100 million. And that's actually still a smaller mining company in the bigger picture. But with this company's current share structure, a $100 million market cap would mean a $1.60 stock. And from $0.06 to $1.60 is over a 2,500% gain.

Don't think this doesn't happen. Back in 2006, shares of Aurelian Resources increased over 4,000% almost overnight after the company reported extremely positive exploration result. Aurelian was subsequently bought out by Kinross for $1.2 billion. And this is only one of several massive success stories in junior mining stocks. 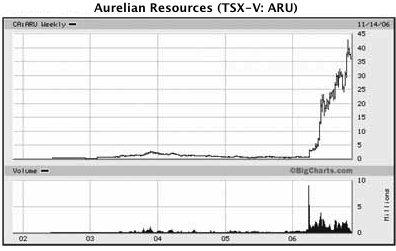 Just for fun, I figured out what a similar buyout deal would do for Alex's new $4 million exploration company...

It puts this company's share price at nearly $20 — for a 30,000% gain! Every $1,500 invested would turn into nearly half a million dollars! So this is an area play you definitely want to check out. I think a small investment is absolutely worth the risk. I even just bought a few thousand shares myself.

These area plays can be among the most profitable. I highly recommend doing some research yourself to position your own portfolio with some of these junior mining area plays. Or check out Alex's new recommendation.

We're about to experience the single-greatest gold price rally in history. Prepare yourself.