Copper hasn’t exactly enjoyed an impressive run as of late, but many analysts believe it might now be time for a shift in pricing to occur.

The potential transition comes with news that China’s economic woes may be taking a turn for the better, thus increasing the demand for copper within the country. 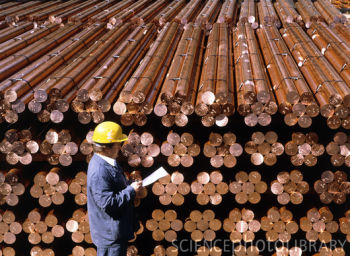 According to Reuters, copper climbed to $7,415 a ton on the London Stock Exchange on Monday, up from a closing of $7,375 on Friday. Last Wednesday, pricing had hit $7,480, the highest it has been in a month’s time.

Stockpiles of the metal have also fallen slightly, leading many to believe that copper is ready for a significant shift in demand.

April did not show very much promise in terms of Chinese demand for copper. Factory production was exceedingly quiet, leading many to believe that the Chinese economy was set to see an increasingly evident downturn.

It’s unclear as to whether or not easing will be ramped up in order to shift the focus away from a lack of production, although the country has a lot of global factors to take into consideration.

The global economy has been in flux for much of 2013 so far. A quick look back at the bailout scenario in Cyprus serves as a reminder that the Eurozone has been anything but stable as of late, and April numbers in Chinese factories don’t exactly bode well for the country, either. That said, America is actually looking towards some bright improvements.

April was a strong month for U.S. retail sales, with cars, building materials, and other commodities meeting or exceeding sales expectations. This puts the economy – the largest in the world – in a better potential state than many might have believed it’d reach this quickly, strengthening the dollar and putting more pressure on other large global players such as China.

With physical demand for copper growing, however, it wouldn’t be difficult to surmise that things could easily turn around for China if the country is able to increase production numbers in its factories.

Investors have a great deal to be excited about given the news that demand for copper has increased in recent weeks. If this trend continues, the base metal could see quite a bit of growth in even a short period of time, especially if China’s economy is able to improve in the short-term.

Given the scenario, many analysts believe that now is the perfect time for investors to jump in with copper.

Copper investing is elusive to some, but there are a variety of ways to go about it in a calculated way. Perhaps one of the best methods of getting involved is to look towards copper mining companies.

With an increase in demand will inevitably come an increase in production, boding well for companies that specifically deal in the mining and refining of copper. There’s been a great deal of movement in the industry of metal mining in recent months, showing that mining companies are interested in further exploration, testing the waters for the future of both industrial metals like copper and precious metals like gold and silver.

Some, however, are unsure as to whether or not the increase in demand for copper in China will continue. Shanghai has been seeing falling cash premiums, which leads some to believe that the current demand for the metal may not last much longer.

Demand may be seasonal, and this could be part of a bubble that is ready to burst. While it’s too early to tell at the moment whether or not this may be the case, it’s important for anyone who is interested in copper investing to keep this in mind.

If China is able to continue restocking industrial copper and improving production rates in its factories, the future of copper could be very bright. Investors should remain leery, as with any market that is in constant flux, although to say that copper is doomed would be simply missing the mark.

Numbers in recent weeks may not seal the deal on a massively-improved copper market, but they certainly serve as an indication that things are approaching an upturn.