But before the subprime you-know-what hit the fan, China's Shanghai Composite Index returned 393% in just 15 months.That's where Hong Kong investor Zhao Danyang made a mint, enough to let him bid $2.1 million for a New York dinner with the Oracle of Omaha.

Buffett won't pocket the loot... it goes to charity. But Zhao's gusto for market wisdom shows us Communist China is staking its claim atop the world's financial pyramid and desire to rub elbows with the best in the West.

Call it a bubble if you want, but there's a lot more meat on the bone in China's investment story than there was in the domestic dot-com bust of the late 90s.

Economic growth is still ripping ahead at near double-digit levels despite the bearish Dow and other major world indexes, making it not a bubble but a value investor's playground.

As the Wall Street Journal's Robert Frank observed, lunch with Buffett has been won at auction by many of the 77 year-old's Asian fans in recent years:

And many [of the Asian winners] say they wanted to dine with Mr. Buffett to thank him, since they credit some of their success to his investment philosophy. Given his wide influence, and the new value-investing fortunes being made overseas, it's likely that a $2 million lunch with Mr. Buffett today might even look like a bargain in a few years.

Lots of things will look different in a few years. China a few years ago was ridiculously cheap compared to today, but the market was immature and most foreign investors stayed away both because of prohibitive rules and general skittishness.

China is fundamentally changing. I've seen it for myself on two separate trips two years apart, which seemed like centuries in some areas of Beijing and the western provincial capital of Xining.

First, prices just aren't where they used to be.

Whether by speculative action, adverse weather conditions in major food producers like Australia and the American Midwest, or the increasing prosperity and appetite of Chinese citizens, rice nearly doubled in price from this January to April.

Check out this chart of Chicago Board of Trade rice futures and you see what I mean: 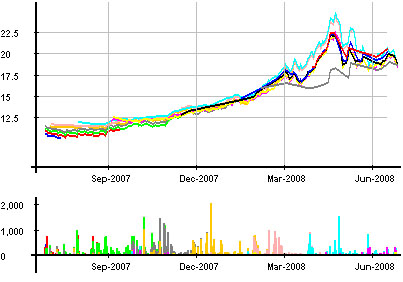 That food jump changes the balance of costs for families. Meal costs are chiseling away at China's household savings rate, which had been known to exceed 40% of gross income.

Even as the air got let out of world equities exchanges, we've seen commodities keep running upwards.

Of course energy commodity prices play a big role too, with more Chinese jumping into cars and off bicycles every year.

Shanghai Daily newspaper reports that 4.3 million cars were sold in China through May. That's a 17% increase over the same period in 2007.

Ahead of the Olympics, Beijing officials have tried jacking up tolls, finally letting fuel prices rise, and even making the capital's motorists alternate driving days in order to cut pollution and conserve petroleum supplies.

But the likes of Zhao Danyang, who manages Pureheart China Growth Investment Fund, and millions upon millions of other Chinese, have made it clear that they'll gladly pay fines or bribes to get around emissions restrictions, customs forms, and even China's One-Child Policy.

Zhao will toast success with Buffett, and then he'll come back to Asia to hunt for more bargains and live the life of the Middle Kingdom's new elite.

Don't let the charts scare you, folks. The best investors always find value, wherever it may be.

P.S. Warren Buffett's traveling to Germany and Asia looking for bargains, and that's the mode we're in at Global Growth Stocks, too. I'm taking off Wednesday for a continent-wide research trip in Europe, and Arlene Lingba is going to be our eyes and ears all summer as China prepares to host the Olympics. To get the best on-the-ground info from the both ends of the world economy, sign up for Global Growth Stocks today.