On Wednesday, e-commerce giant Amazon (NASDAQ: AMZN) dropped a piece of news that consumers and investors alike have been waiting for since as early as 2013.

After years of behind-the-scenes development, Amazon has finally revealed its Prime Air delivery drone, coupled with a joint announcement that it plans to use the technology to begin delivering packages to consumers in “the coming months.”

The announcement puts Amazon slightly behind schedule, as Jeff Bezos first told 60 Minutes in December of 2013 that Amazon drones would delivering packages within five years, but no one is going to give Bezos too much flak for executing this potentially groundbreaking idea a few months behind schedule.

The autonomous electric drone was revealed at Amazon’s annual MARS (Machine Learning, Automation, Robotics, and Space) technology conference in Palm Springs, California. There was a fair amount of buzz generated around the conference this year, as it continues to grow in popularity, but the company’s electric drone was easily the most notable reveal. 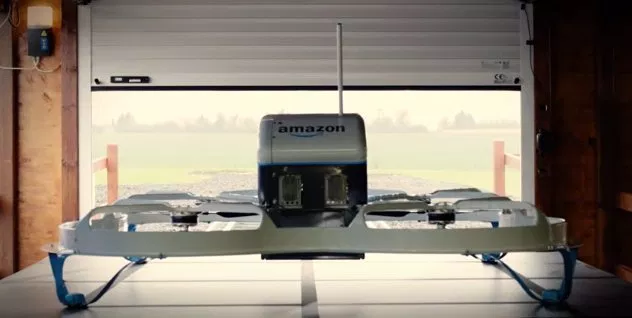 Amazon says its new drones are equipped to fly up to 15 miles, delivering packages weighing up to five pounds and within 30 minutes. Considering the fact that between 75% and 90% of the products Amazon delivers weigh five pounds or less, it’s a potential game changer for the delivery market and a major competitive advantage for the company in both e-commerce and logistics.

As is usually the case with new tech rollouts, the “launch” of Prime Air will come with a number of caveats. Although this is not yet confirmed, we can say with near certainty that the drones will only be available in select markets.

The drones will also technically only be a pilot program, as Amazon has received a one-year approval period from the Federal Aviation Administration (FAA) for testing the drones. Amazon will initially test the drones with deliveries of household goods, presumably under its “Prime Now” platform.

According to MarketsandMarkets, the global drone logistics and transportation market is expected to reach $11.2 billion by 2022 and $29.06 billion by 2027. That works out to a very healthy compound annual growth rate of 21% in the long term.

Amazon, of course, will be leading the pack in penetrating this market, but the company faces potential competition from UPS (NYSE: UPS), which launched its first residential drone delivery in March, and, to a lesser extent, from Alphabet Inc. (NASDAQ: GOOG), which is testing its own delivery drones (Google is notorious for vaporware, so we’ll take these efforts with a grain of salt).

Deutsche Post (OTC: DPSGY), otherwise known as DHL, is also gearing up to operate in aerial delivery. The company has developed a “Parcelcopter,” which concluded a three-month test trial as early as 2016. The company is currently using the technology to make deliveries in hard-to-reach areas like mountain communities, but it says its goal is to provide same-day drone delivery in towns and cities.

Drone delivery through the air, though, is just one piece of technology within a broader area of e-commerce and logistics innovation, something known in technical jargon as last-mile delivery.

In short, last-mile delivery refers to the movement of goods from a transportation hub to the final delivery destination. Costs of last-mile delivery are substantial, accounting for roughly 53% of delivery expenses, which is why e-commerce and logistics companies are aggressively developing new technologies to make it more efficient.

On top of (or, more literally, below) flying drones, logistics firms are also developing ground-based drones as a means of automating the delivery process. In February, FedEx (NYSE: FDX) turned to the inventor of Segway to build it an autonomous delivery robot capable of carrying packages surpassing five pounds. 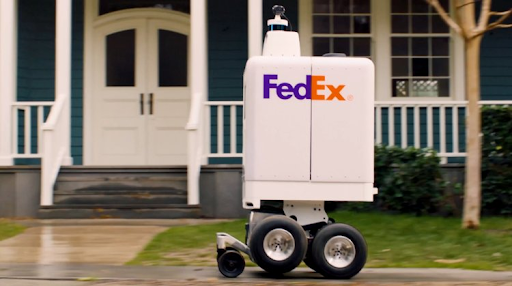 Likewise, Amazon announced its own self-driving delivery vehicle dubbed “Scout,” which it is currently testing in the suburbs of Seattle.

Whether or not FedEx, UPS, or DHL will be able to compete with Amazon is a question that will only be answered in time, but the opportunity for investors is less of an uncertainty when you consider the underlying technology enabling automated drones to exist in the first place.

Among other technologies, this encompasses machine vision components (sensors and cameras that allow these drones to navigate safely), motion controllers, and power controllers that ultimately enable drones to operate.

Needless to say, the companies producing the components are poised for significant growth, given the expected proliferation of last-mile delivery drones. The key, of course, is identifying the right suppliers before they get gobbled up.

Delivery drones, though, don’t just represent opportunity; they represent disruption as well. The more convenient that delivery becomes, the stronger the bear case for brick-and-mortar retailers across the board. In the long run, we’re moving toward an economy where virtually everything will be delivered by drone.

That’s bad news not only for companies like Walmart (NYSE: WMT) and Target (NYSE: TGT), should they fail to keep up with the changing times, but also for brick and mortar REITs, whose futures rely entirely on physical store fronts.

STORE Capital (NYSE: STOR) and Seritage Growth Properties (NYSE: SRG) are among those under threat.

As for the drone component companies mentioned earlier, we’ll have more details coming your way at a later date.