Inflation Will Crush the Poor

Food prices are rising in Egypt, and fast. Reuters reports that “data on Sunday showed prices in towns and cities rose 8.2 percent in the year to February, sharply higher than the 6.3 percent the previous month”, and that “February's month-on-month inflation rate also leapt to 2.5 percent from 1.7 the previous month, the CAPMAS statistics agency reported on its website.”

EFG-Hermes economist Mohamed Abu Basha told Reuters inflation may accelerate further still. “It could rise more given the ongoing unrest and huge losses in the value of the Egyptian pound of around 10 percent ... since the start of the year,” he fears. He also noted markedly higher prices for fuel used by food producers and trucking companies which “have a direct impact on the prices of food and other products”.

In an effort to keep prices low and assist the disproportionately large 40% of the population living below the poverty line, the government is subsidising basic food staples. “However, the falling pound has also pushed up the government's subsidy bill as it has to buy large amounts of wheat on international markets for dollars to feed the poor,” Reuters reports.

Where is the money for these subsidies coming from? The Irish Times answers, “The country’s foreign currency reserves, which pay for food and fuel, fell from $15 billion to $13.6 billion during January, down from $36 billion two years ago. Egypt has enough money for three months’ supplies.”

And this only makes inflation worse. A nation’s currency is only as stable as its income and its reserves. With total imports of $58 billion—more than double exports of $28 billion—and a rapidly depleting reserve, the government is becoming increasingly more desperate, as Reuters reveals, “With its dollar reserves falling to critically low levels, the government wants to reopen stalled negotiations for a $4.8 billion loan from the International Monetary Fund.”

But the “deal seems elusive as analysts believe the IMF will be unwilling to lend to Egypt during feuding between the ruling Islamists and opposition, on top of deep uncertainty over when parliamentary elections will be held.” For some background into the political divisions between Egypt’s liberally-sympathetic parties and the religiously-fundamental leadership, see last month’s Wealth Daily article, Egypt's Economic Woes.

But there is more bubbling up within the minds and hearts of Egyptians. There is a growing sense of despair for the future, especially among the youth—those in their early adult years when they chomp at the bit eager to get things moving.

A very significant pattern among the populations of Egypt and many other Arab nations is the disproportionately large “youth bulge”, as can be noted in the following graphs comparing Egypt’s age demographic to that of the United States, published in the CIA World Factbook. 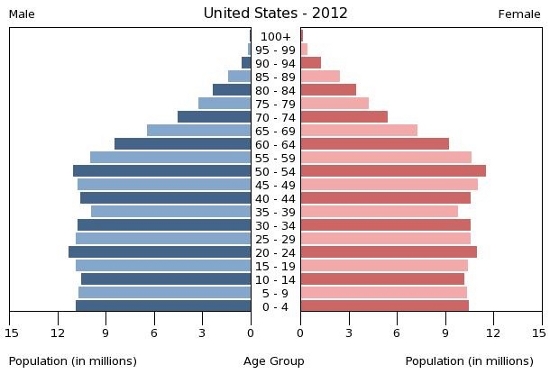 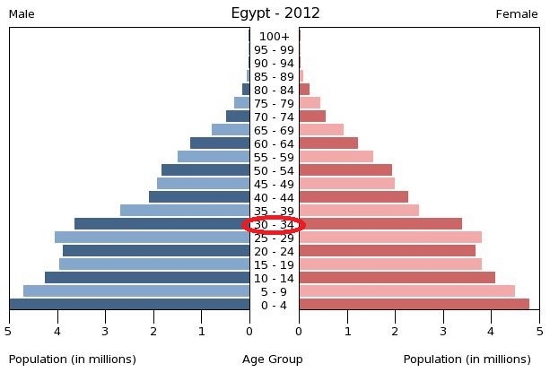 Egypt’s recently ousted president Mubarak came to power in 1981, some 32 years ago. The population born in Mubarak’s early years are now in the 30-34 age group circled in red above. The rapid prosperity of the early Mubarak years filled the population with optimism, producing a population bulge or baby-boom which lasted some 10 years. These boomers are the 25- to 34-year-olds today. And they want change.

Now, this in and of itself is not necessarily troublesome for a population if there is a large percentage of adults over 40 to provide guidance and direction. In the United States, for example, the population’s 13.8% in the 15-24 age group is very close to the 55-64 age group’s 12.1%. In fact, as the graph shows, there are plenty of the wiser gray-haired from 40 to 64 to provide leadership to those following in their footsteps.

In Egypt, though, the ratio is starkly disproportionate, with some 18.2% of the population in the 15-24 age group and only 6.5% in the 55-64 group. This younger group out-numbers the older by almost 3 to 1. What is more, Egypt’s 15-34 age group totals some 31 million of the total population of 83 million, equalling some 37% of the nation. (All figures from the CIA World Factbook.)

The significance of this has been argued for decades. Political unrest in the Middle East in recent years prompted a fascinating 2011 paper entitled “A Clash of Generations? Youth Bulges and Political Violence” by Henrik Urdal at Harvard Kennedy School, Harvard University.

“Youth often play a prominent role in political violence, and the existence of a ‘youth bulge’ has historically been associated with times of political crisis (Goldstone 1991; 2001). Generally, it has been observed that young males are the main protagonists of criminal as well as political violence.

“In ‘The Coming Anarchy’, Robert Kaplan argues that anarchy and the crumbling of nation states will be attributed to demographic and environmental factors in the future (Kaplan, 1994: 46). More recently, youth bulges have become a popular explanation for current political instability in the Arab world and for recruitment to international terrorist networks.”

Incidentally, the United States experienced its own period of widespread rioting and unrest during the late 1960’s and early 1970’s when its post-WW2 baby-boomers reached their twenties and late teens.

“In a background article surveying the root causes of the September 11, 2001, terrorist attacks on the US, Newsweek editor Fareed Zakaria argues that youth bulges combined with slow economic and social change has provided a foundation for an Islamic resurgence in the Arab world (Zakaria, 2001:24).

“Samuel Huntington qualified the ‘Clash of Civilization’ by adding the dimension of age structure: ‘I don’t think Islam is any more violent than any other religions […].But the key factor is the demographic factor. Generally speaking, the people who go out and kill other people are males between the ages of 16 and 30. During the 1960s, 70s and 80s there were high birth rates in the Muslim world, and this has given rise to a huge youth bulge.’”

What rings the alarm most loudly is the noted expectation “that youth bulges combined with slow economic and social change” trigger unrest. This was one of the leading criticisms against ousted president Mubarak’s rule, as the above cited article in the Irish Times explains:

“The main cause of the disastrous economic situation is the failure of the 30-year Mubarak regime to invest in the country. Egypt’s infrastructure, manufacturing sector and housing depreciated while the country’s population rose to 83 million; 40 per cent subsist below the poverty line.”

And the new government, though new at the helm, is managing only to steer the nation further onto the rocks.

The Irish Times article summarizes the frustration among Egypt’s youth. “Youth unemployment is 65-75 per cent, one of the highest in the world. School leavers and university students who have no work live at home, dependent on their parents – unable to find jobs to support themselves or marry, their lives empty except when they march in protests.”

Bleak prospects are the last thing you want to put before your youth. This is the age group—the 15-34’s—that wants to break free from parents and establish a different path. This is the group that searches for its own identity, its own destiny.

A nation could prosper immensely if it could harness the raw energy and enthusiasm of this most ambitious of age groups. But in the hands of an incapable government—especially an out-of-touch, non-progressive government, as some fear the new Egyptian religiously-inclined government is—this most valuable of resources would only be squandered, sowing the seeds for yet another revolution before the dust has even settled from the last one.

They say a nation is only 3 meals away from anarchy, and revolution befriends the youth. Given Egypt’s government’s inability to stabilize food prices, employ their youth, and closely integrate with the rest of the world politically, socially and economically, how long can it be before it is overturned yet again?

Gold, Oil and Death
Editor Chris DeHaemer explains what we can expect for the price of gold and oil as we await tomorrow's Federal Reserve meeting.
China Back to Growth
The Shanghai 180 Index has fallen from a high near 13,000 five years ago to 4,600 today, and now it's 300 Points Away from a Flashing Green Buy.
Egypt's Economic Woes
Over a year after the revolution, Egypt is still struggling to revive its economy. Gold demand surged in 2012...
Buffett's Envy: 50% Annual Returns, Guaranteed
Warren Buffett once told investors at an annual shareholder meeting, "...it's a huge structural advantage not to have a lot of money. I think I could make you 50% a year on $1 million. No, I know I could. I guarantee that."