How the Senate Vote to Delist Chinese Stocks Affects You

The last year has been an inauspicious one for stocks. The Dow Jones Industrial Average is down almost 5% from where it was last May.

But during that time, several Chinese stocks have helped investors grow their money by double digits. 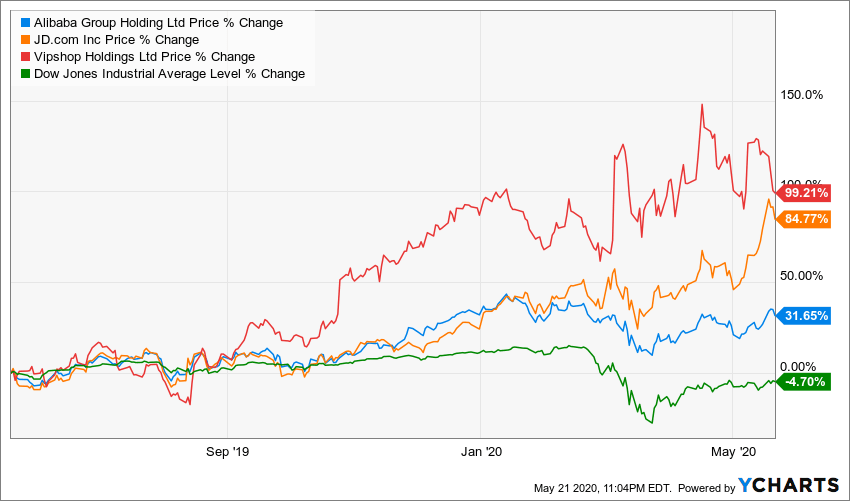 As you can see above, Chinese retailers Alibaba (NYSE: BABA), JD.com (NASDAQ: JD), and Vipshop Holdings (NYSE: VIPS) have all handily outperformed the market over the last year. They’re three of the 156 Chinese companies that trade on U.S. exchanges and have a combined market capitalization of $1.2 trillion.

Of course, there are some difficult questions that come with investing in Chinese stocks. Given the way they operate, do these companies deserve this kind of prosperity? And more broadly, given the way China operates, does it deserve American investment dollars?

After all, China has built itself into an economic hegemon largely by stealing Western companies’ intellectual property, then using tariffs and other abusive trade practices to make those Western companies uncompetitive against China’s homegrown rip-offs.

Alibaba, for instance, is basically an Amazon clone operating in a country where Amazon’s operations are severely restricted. And it’s lousy with counterfeit goods; the Office of the United States Trade Representative has designated its Taobao platform a “notorious market” for several years in a row. Beijing has done very little to address this problem.

Not to mention, China’s government is a prolific human rights abuser (it may be committing a genocide of its Uyghur population as we speak), and its self-serving actions in the early days of the COVID-19 pandemic worsened the spread of the disease.

With all of this in mind, American legislators recently decided to take an aggressive stand against China’s publicly traded companies. Last week, the Senate passed a bipartisan bill, S. 945, to delist Chinese stocks like Alibaba from American exchanges.

But how exactly would this legislation banish Chinese companies from our markets? How effective would it be? And what impact would it have on investors? Let’s dig in…

The Senate bill was introduced by Democrat Chris Van Hollen of Maryland and Republican John Kennedy of Louisiana and was overwhelmingly approved on Wednesday.

It would bar companies that are unable to prove they’re not owned by the Chinese government as well as companies that cannot be audited by the Public Company Accounting Oversight Board (PCAOB) for three consecutive years from all U.S. exchanges.

This would effectively force a lot of Chinese stocks out of U.S. markets. Alibaba, for instance, has never been audited by any American firm or government agency.

And many Chinese tech companies, like search giant Baidu (NASDAQ: BIDU), are widely assumed to be under some degree of covert government control due to their strict political censorship policies.

The bill would allow delisted companies to move to another exchange, like London or Hong Kong, and it wouldn’t necessarily prohibit continued American investment through exchange traded funds (ETFs) or mutual funds.

But it could still have a variety of effects — both positive and negative — on American investors and on the businesses it’s meant to target...

How It Affects Investors (And Chinese Companies)

The intentions of the bill are understandable, especially at a time when COVID-19 is ravaging the world thanks, in part, to the inaction and cover-up attempts of the Chinese government. But will it actually be effective in economically punishing China? And will it do right by American investors?

These are complicated questions. As I mentioned a few paragraphs ago, the bill would simply result in Chinese stocks moving to other exchanges around the world.

In fact, China has already launched a program to help companies list on the London or Hong Kong stock exchanges in response to the news. So it wouldn’t do a ton to cut Chinese stocks off from global investment capital.

But… the three companies I profiled at the beginning of this article, Alibaba, JD.com, and Vipshop, have all dipped significantly in recent sessions on news of the bill’s advancement. 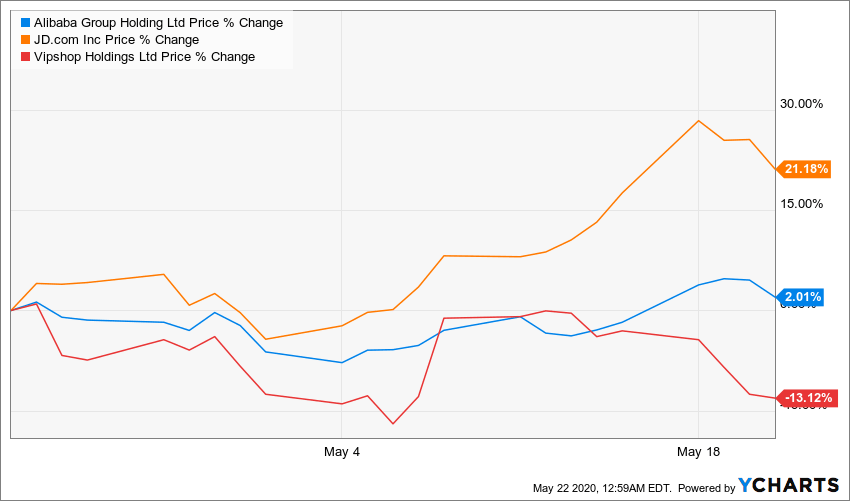 This discount reflects another anxiety American investors have about the bill — that they might lose their money due to political spite.

It is generally assumed that in a situation like this, investors in delisted Chinese companies would be given an equivalent number of shares in the “new” stock on the exchange the company has moved to.

But China has already warned the U.S. of “significant repercussions” in response to the move, and in theory, there’s nothing forcing it to transfer those shares in the likely event that many Chinese stocks decide to re-list back home in Hong Kong or Shanghai.

In other words, it could simply seize the equity held by American investors, bilking them out of as much as $1.2 trillion in Chinese stocks.

On the other hand, cutting Chinese companies off from $1.2 trillion of investment capital is no small blow to those companies — or China’s protectionism-fueled economy.

And supporters have pointed out that it is simply amending the law to make Chinese companies play by the same rules Mexican, Russian, or American companies must play by on American exchanges.

No company from these countries — or any other country, except China — has been allowed to stay listed without regular PCAOB inspections since the time of the Enron scandal.

Anyway… Wealth Daily isn’t a political newsletter, and I’ll leave the final judgement to you on whether or not S. 945 was a good move.

But there’s an obvious investment takeaway to all this: Don’t buy Chinese stocks and think about selling the ones you currently hold.

No matter what, this delisting process is going to be messy for shareholders, and is going to involve a lot of uncertainty about where the stocks end up and who gets to keep their money. That means more discounting ahead for Chinese stocks… at the very least.

Looking for more guidance on how to weather the escalating trade conflict between the U.S. and China? Check out Bull and Bust Report. Its editors been factoring the trade conflict into their modeling for years — and profiting from a variety of stock and precious metals bets in the process. Click here to learn more.