How Corrupt is Goldman Sachs?

Goldman Clients Get the Shaft... AGAIN

Goldman Sachs CEO Lloyd Blankfein should be hung by his thumbs in a public square...

Because the climate he oversees at Goldman is completely void of common morals and ethics. This bunch of bloodsuckers would sell out their own mother if it meant they could put a couple bucks in their pocket.

I know this may not come as a complete surprise, but the latest example of Goldman's profit-mongering deceit is so blatant, so downright perverse, it's almost comical. Almost.

I'm sure you've heard that Warren Buffett partnered with Brazilian private equity firm 3G Capital to buy out the Heinz (NYSE: HNZ) company for $24 billion. The deal was announced on Valentine's Day.

But as late as February 10, Goldman Sachs was telling its clients they should sell Heinz because weakness in foreign currencies were likely to affect earnings. With the stock trading around $60, Goldman slapped a $53 price target on Heinz shares.

Goldman's clients that acted on the firm's recommendation missed the 20% pop when the Buffett deal was announced.

I suppose Goldman's “sell” recommendation could be dismissed as bad timing, and the thesis that weakness in foreign currency would hurt earnings was actually correct...

But rumor has it that it was Goldman's own traders that were buying the Heinz shares their clients were selling.

So Goldman made money while its clients missed out.

Why Blame the Wolf for Being a Wolf?

I suppose some people will say that you can't blame a wolf for acting like a wolf. So, why should anyone expect anything other than ruthless profiteering from Goldman Sachs?

And I'd expect some may point out that Goldman had no way of knowing that Buffett was going to take Heinz out.

Neither of these “excuses” holds water. For one, people did know that Heinz was about to be acquired; the SEC is already investigating suspicious trades ahead of the acquisition announcement. And two, this type of behavior isn't new for Goldman.

In fact, it's business as usual...

The list of Goldman's misdeeds goes on and on.

Everyone knows that a wolf will kill and eat pretty much any animal it catches. That's why nobody hangs out with wolves.

So why, oh why, does anyone do business with Goldman Sachs?

I think I know the answer...

Bernie Madoff was forced to reveal his massive Ponzi scheme after the financial crisis pushed stocks so low, he could no longer pay redemptions to his “fund.” But people knew he was up to something for years.

Madoff's reported returns on his investments were so good — and so consistent — investors figured he was involved in insider trading or some other scheme. And that made them want to invest with Madoff. They figured they'd benefit from Madoff's questionable ethics.

I bet these investors were pretty surprised to discover just how depraved Madoff really was...

Something similar is probably in play with Goldman Sachs. Everyone knows Goldman will cross any ethical boundary if there's a profit on the other side. And that's exactly why so many people want to be part of the Goldman wolf pack. They figure they won't go hungry with a wolf pack on their side.

Now, can you imagine how it feels when you suddenly realize you're surrounded by a pack of drooling wolves... and you're the sheep?

I bet that's how Goldman's clients who sold their Heinz shares feel. And there's not a damn thing they can do about, except run as far away from Goldman as they can — before Goldman figures out a new way to “reallocate” client money into its own pockets.

We Make Money the Old-Fashioned Way

I want to be clear that I have no problem with ruthless profiteering. I'll buy sin stocks like Philip Morris (NYSE: MO) if I think I can make some loot. I value my health, so I rarely eat fast food — but I have no problem recommending a stock like McDonald's (NYSE: MCD) if I think it's going to make more money selling food to people that is not good for them.

At Angel Publishing, we are not money managers. We don't take part of your money when you make a profit on a stock we recommend. And we don't get paid to recommend specific stocks. We are completely independent. We make money by selling our insights and research in subscription newsletters and trading services.

We're good at what we do. We don't need to deceive you or lie to you to make our business work. In fact, deceiving our readers would put us out of business — fast. Heck, we can barely afford to be wrong! (So it's a good thing we're not wrong very often.)

Because the bottom line is this: If you don't make money from our research, you take your business elsewhere. Period.

Yes, we'll never be as big as Goldman Sachs. Our management team won't get tapped for cushy Treasury jobs. Our analysts will never take home million-dollar bonuses. And frankly, that's just fine with us (well, except for the million-dollar bonus part... that would be OK).

So far this year, my colleague Christian DeHaemer has taken an average of 100.94% per trade in his Options Trading Pit service...

Yeah, he's pretty good at what he does. Now, Christian doesn't trade a lot. But his readers have the confidence that when Christian moves, they have a good chance to double their money. (He's only been wrong once this year, for a small 10% loss.)

You may recall that Christian announced his Westport trade right here in Wealth Daily. A week later, that trade was up 185%.

Right now, Chris is patiently waiting for a powerful setup in the precious metals market that is very likely to produce his next triple-digit winner.

I'll even tell you what he's watching... 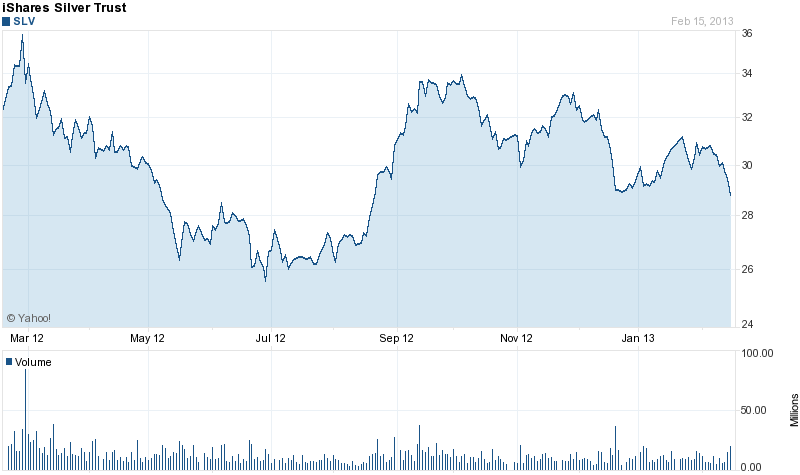 As you can see from this chart, silver prices have been pretty volatile for the last year.

But you should also notice that when silver prices move up, they ramp very quickly. It's the type of movement that can give you a triple-digit gain in a couple of days.

Now, I can't say exactly when Christian will enter this trade. The “buy” signal might flash in the next few days.

Like his 185% Westport trade, he may even announce his entry here in Wealth Daily, so you may want to keep your eyes peeled...