It looks like the housing market is definitely on its way up, and all it took was six years.

March mortgage numbers indicate that first-time delinquencies dropped to 0.84 percent against 50.2 million mortgages in total. That’s significant because it is the first time that figure has fallen below 1 percent since 2007.

“Mortgage quality is improving rapidly,” Mark Zandi, chief economist for Moody’s Analytics Inc. said in a telephone interview from his office in West Chester, Pennsylvania. “Once we’re able to work through this last bulge of foreclosed property, which I think we’ll be able to do over the next 18 to 24 months, mortgage credit quality is going to look absolutely beautiful.” 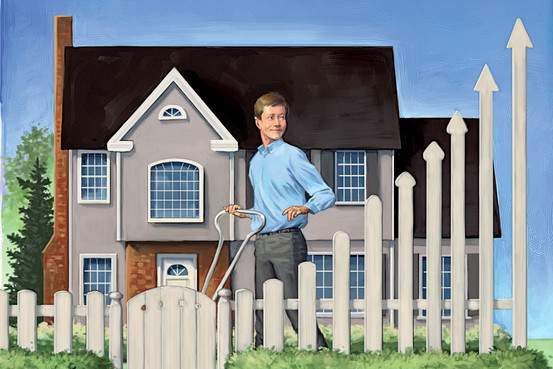 Clearly, the drop in “new” problematic loans is a hopeful sign that a combination of overall domestic economic recovery, decreasing unemployment figures, and increasing housing prices has helped the nation move forward.

Banks and other lending agencies have also expanded oversight over lending procedures, which has made it harder to get mortgages approved. That has, certainly, helped reduce mortgage default rates, but it has also meant that American homeownership is now at or below 65 percent. That’s nearly a 20-year low.

Meanwhile, the Federal Housing Association has upgraded its standards; as of Q3 last year, 97 percent of all borrowers had credit scores over 620, compared to Q4 of 2006 when just 53 percent did.

Elsewhere in the housing market, signs abound that there is indeed a systemic recovery afoot. Data from Standard & Poor’s and Experian indicate that that the national composite default rate was 1.5 percent for March, down from February’s 1.55 percent. Rates for first and second mortgage defaults, respectively, are at 1.41 and 0.69 percent for March. They’re both on the decline, from 1.48 and 0.71 percent.

Over in San Diego, for example, mortgage defaults are now at their lowest level since back in 2005. The state has a new law in place that makes it a bit more difficult for banks to initiate foreclosure proceedings.

And home prices continue to rise. Foreclosures in process are down to 1,471 for the first three months of this year. According to real estate research firm DataQuick, that’s the lowest since 2005’s final quarter, which saw 1,173 notices of default.

Likewise, bank foreclosures are down by nearly 31 percent to 882—a six-year low. It seems the entire Southern California region is experiencing a fairly healthy recovery in the housing sector. The Homeowners Bill of Rights has attended to a range of problems in housing, such as ending the process of dual tracking (under which foreclosure can be initiated while a loan modification request is still in process).

And the Bill also mandates at least one “point of contact” for borrowers seeking loan adjustments, rather than automated signing off on foreclosures.

Running Out of Available Homes?

Meanwhile, what’s a bit odd is that the number of available homes is falling quickly nationwide. In fact, it’s at a 13-year low right now, despite prices rising across the board—about seven percent since 2012.

One factor is that despite foreclosures lessening, some twenty percent of all homes remain in the red. With loans for more than what the house would go for, the owners can’t possibly sell.

But the more weighty factor is that big firms are taking advantage of the resurgent housing market to avail of government or state funding, scooping up large chunks of real estate that they can then turn to their own profit. As of 2012, more than 55,000 single-family homes were bought up by investment firms that have suddenly taken an interest in real estate.

The problem areas continue to be the typical ones: New York, Los Angeles, and San Francisco, but also Austin, Seattle, Washington D.C., and Las Vegas.

But elsewhere, the number of houses on the market has gone up even as prices have fallen somewhat: Huntsville, Alabama, El Paso, Texas, and Springfield, Illinois for example.

While the Fed continues its stimulus actions, these conditions should endure. That means investment firms will continue buying up houses, and prices will continue rising.

That means investors should be looking at the companies involved in housing, like DR Horton (NYSE: DHI), Toll Brothers (NYSE: TOL), or Hovnanian Enterprises (NYSE: HOV). Horton happens to be the largest home builder in the nation.