If you haven’t heard of graphene yet, you will. Oh, you will. For it will be everywhere.

It will be in electronic devices such as cell phones, tablets, and laptops. It will be in central processing units of vehicles and home appliances. It will likely replace batteries and digital screens, and it could even find its way into your body as part of a medical device.

In the most basic of terms, graphene is a super thin layer of graphite, a carbon-based compound such as that found in pencils. And by thin, we’re talking the thinnest that is physically possible—a layer just one atom thick. 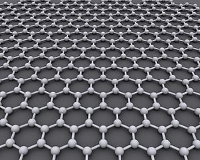 Its thinness makes the material ultra flexible, even rollable. Yet despite being so thin and flexible, a sheet of graphene is incredibly strong due to the tight grip that its carbon atoms have on one another. They interlock like hexagonal chicken wire.

Just these two characteristics of super strength and super flexibility alone are enough to qualify graphene as a wonder material. But add the attribute of super conductivity, and you now have a miracle material that is destined to change the world in ways we can now only imagine.

Electrons flow through graphene with the greatest of ease, better than even copper wiring, ultimately ushering in a brand new age of electronics—smaller, stronger, cooler (as in giving off less heat, although the ‘hipper’ definition of the word would likewise apply).

Indeed, the age of graphene is quickly dawning upon us. With applications in so many fields—from medical devices to consumer electronics to industrial materials that can be electrified for any number of purposes from lighting to security—any company innovative enough to embrace it would find itself catapulted light-years ahead of its competitors.

With so much to gain from tapping into the wonders of graphene, you would think hundreds if not thousands of companies would be tripping all over one another for a piece of the graphene pie. But surprisingly, not so many are.

With so much at stake—profits, market share, brand recognition, and reputation—every new invention and every alteration of an already existing invention needs to be protected by patents.

Questing for patents is such an expensive pursuit, so it is not surprising that corporations need the backing of their national governments to succeed. Yet only a handful of governments are in a position to lend a helping hand: those with the foresight to see what the world will want and need well into the future, and those that have the money to support it.

For those two reasons, it is not surprising that the majority of graphene-related patents are held in the Asian region. Europe—where graphene was first isolated in British labs in 2004—is way too distracted by crises to join in the questing fun at this point in time.

The future of these economies will be re-shaped not just by their aggressive commitment to R&D in general, but also in very large measure to their concentration on graphene related technology. That’s how impacting graphene will be.

The Business Insider explains just how crucial R&D is to a nation’s share of a new market:

“Chinese, U.S., and South Korean firms [will have] first mover advantages as product/market spaces open, to fully exploit those opportunities under the protective cloak of the patent system … allow[ing] them to legally defend those products and markets, foreclosing options for competitors, and have a higher degree of early life cycle monopolization.”

In other words… an early foothold with legal protection will ensure those nations’ dominance of the graphene market.

“Those in at this stage,” sums Business Insider, “will potentially benefit the most by setting the industry standards, and becoming keystone firms for future roadmaps.”

That’s how critical R&D are in this day and age. And nations too distracted by political or economic quagmires are going to be quite simply passed by.

As you will note, only four of these top ten patent holders are companies, while the rest are universities.

There are also a number of chemical companies that sell graphene in liquid form, for those who would like to try their hand at making graphene sheets of their own.

And from there, who knows—you may end up inventing a whole new application for the miracle material and stake a claim of your own in this yet uncharted new world of graphene.